California – which has the world's fifth-biggest economy – said it would ban sales of new petrol or diesel cars by 2035. The declaration came days after China's President Xi Jinping surprised many by telling the United Nations General Assembly his country would achieve net-zero carbon emissions before 2060. 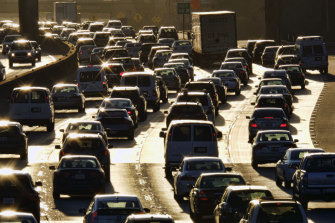 Traffic in Los Angeles: California will ban all petrol-driven cars and light trucks by 2035, joining a growing list of markets to set a date for phasing out internal combustion engine passenger vehicles.Credit:AP

On the corporate front, General Electric – builder of the world's first coal-fired power station in 1881 – earlier this week said it would cease making equipment for new coal plants. Also, IBM has earmarked five new technologies it will advance, including capturing carbon dioxide from the air to make new products.

The volley of announcements comes days after the Morrison government detailed its plans to promote low-carbon technologies, such as carbon capture and storage, but has continued to avoid setting a target date to reach net-zero carbon emissions unlike many of its biggest trading partners.

California has long-set vehicle emissions standards that have shaped targets in the US and globally because of the buying power of the state's 40 million-odd residents. On Wednesday, local time, the state's governor Gavin Newsom said California would prohibit the sale of all new cars and light trucks powered by petrol from 2035.

"This is the most impactful step our state can take to fight climate change," Governor Newsom said. "Cars shouldn’t melt glaciers or raise sea levels, threatening our cherished beaches and coastlines."

The state is in the midst of its worst wildfire season on record and another big heatwave is due to arrive in days. 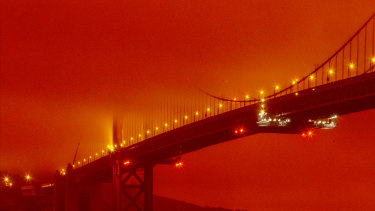 California’s wildfires sent San Francisco’s Golden Gate Bridge into daytime darkness on September 9. The state is in the midst of its worst wildfire season on record.Credit:AAP

Behyad Jafari, chief executive of Australia's Electric Vehicle Council, said California joins a list of other markets preparing to ban sales of new cars with internal combustion engines. Britain has set a 2030 goal, among others.

While the Australian government will spend $74.5 million to support electric vehicle charging sites, its support for the emerging industry is less than half of 1 per cent of the $1.9 billion it set aside for low-carbon technology.

"They are certainly failing to grasp the opportunity provided by the technology," Mr Jafari said, noting the Morrison government had gifted almost triple that sum to increase storage at oil refineries in the county, let alone improve fuel quality.

A spokesman for Energy Minister Angus Taylor said the government's goal was to cut the cost of new technologies, reducing emissions and creating jobs in the process.

"Our approach respects consumer choice and enables them to adopt new technologies, including [electric vehicles], where it makes sense for them to do so," the spokesman said. 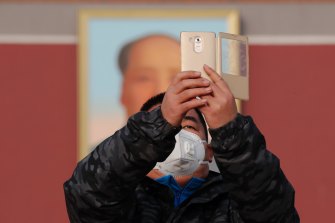 A Chinese man wearing a protection mask takes a photograph in front of the portrait of Chairman Mao Zedong in front of Beijing’s Tiananmen Gate last year. China has given its first indication when it might reach net-zero greenhouse gas emissions. Credit:Andy Wong/AP

China's move also offered a contrast, with President Xi offering the first indication of when the world's biggest emitter of greenhouse gases would reach net-zero emissions.

"China will scale up its [national emissions goal] by adopting more vigorous policies and measures," President Xi said. "We aim to have CO2 emissions peak before 2030 and achieve carbon neutrality before 2060."

Lauri Myllyvirta, an analyst with the Centre for Research on Energy an Clean Air, said it remains to be seen how Xi's surprise comments would square with China's recent accelerated approval of new coal-fired power stations.

"A broad announcement by [Xi Jinping], and one made in front of the world’s assembled heads of state, has the potential to mobilise the resources of the society and re-align the five-year plan targets," CREA said in a report. 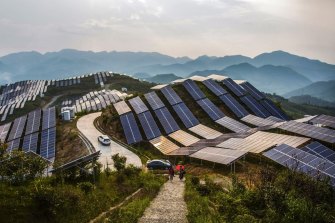 While a big producer of coal-fired power plants, China is also the world’s largest producer of renewable energy plants, including solar farms.Credit:AP

"If the signal goes out to the bureaucracy that this vision is something to be implemented from now on, it can kick China’s energy transition into high gear."

Emma Herd, chief executive of the Investor Group on Climate Change, said more than 40 per cent of Australia's trade was now with countries setting a net-zero goal, a share that would climb above half should Democrat Joe Biden win the US presidential race in November.

Without a net-zero goal of its own, the Morrison government was sending mixed signals to investors, Ms Herd said: "The private sector is trying to work out where the market is going."

Most Viewed in Environment