With the spotlight aimed at her, Drew Barrymore exudes an aura of calm. But on this particular
day the 45-year-old former child star is giving up the pound of flesh a talk-show format inevitably demands of its host: an on-air reunion with her ex-husband, comedian Tom Green. The fine print? The pair have not spoken in 15 years.

In a different decade, and with any other host, there might have been tension. But Drew’s serenity is omnipresent and, as the pair talk, awkwardness gives way to humour, and humour to tenderness. The moment is testament to both the power of authenticity and the willingness of Drew and Tom to invite her audience into so intimate an encounter. 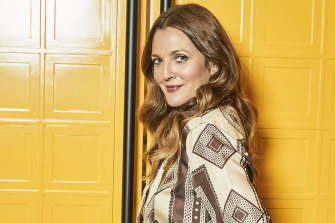 “I hate depressing stuff. I have never been drawn to dramatic films that are good but torture to get through. But it does not mean I don’t have a dark side.”Credit:Ben Watts/The Drew Barrymore Show

“In front of everybody I have a very strong line in the sand of what is too much information,” Drew later tells Sunday Life. “I don’t know if I always knew where that line was, growing up. I think it took me to get into my mid to late 20s to develop that line. There are a lot of things that are simply off the table for me.”

The reunion with Tom was Drew’s idea. “It wasn’t like some cheesy set of producers said, ‘We have an idea.’ I just thought, ‘He’s such a pioneer in comedy – he was doing things before other people were doing them,’ ” she says. “We thought it would be a nice opportunity to reconnect. And I am relieved the way it came out, because you don’t know what’s going to happen.”

The granddaughter of legendary actor John Barrymore, Drew’s life story is that of an archetypal Hollywood child star, complete with highs and lows. She began working as an infant and achieved international fame at just seven years old as Gertie in E.T. the Extra-Terrestrial.

There were dark headlines that followed in her teens, stemming from stints in rehab and separation from her family. But she has shown a rare kind of resilience, stepping into film production and steering the 2000 reboot of the Charlie’s Angels franchise, delivering an acting performance in the critically acclaimed Grey Gardens that won her a Golden Globe and Screen Actors Guild award in 2009, and following that with the hit Netflix zombies-in-suburbia comedy Santa Clarita Diet.
With The Drew Barrymore Show, which debuted last September in the US, she is adding talk-show host to her bow. Filmed in New York, the show’s success cements the LA native, whose carefree energy is synonymous with blue skies and beaches, on America’s east coast, where the pace is fast and the summers are a little less … temperate.

New York has been a challenge for the actor. Drew moved there after marrying her former husband, art consultant Will Kopelman, in 2012, and has remained there for the sake of daughters Olive, 8, and Frankie, 6.

“I felt it was best that I stay here because my kids had better access to the other side of their family. I just thought, do what’s best for them and everything else will fall into place.

“I have always felt I’m playing house [in New York] – I’m pretending, I’m visiting, this is temporary. And now, for the first time in my life, it feels like I reside here. But from the Valley Girl accent to the Bohemian way, I am so California – I’m outdoorsy and blue skies.”

Juggling fame and motherhood, Drew says, is not a challenge, merely occasionally strange. “When [my daughters] were really little and someone would stop me and want to have a moment, so to speak, a photograph, a discussion, or a quick hello, it really freaked them out. And it always felt like bad timing.”

Caught in one such moment, she made a pact with her girls: “I said, ‘If you guys ever need me to stop talking to someone, I will, for the rest of my life, but I don’t want to be rude to people. We can always cut and run and I will always put you first. But if it’s okay, I really want to try and be nice to people.’ ”

For many actors the prospect of moving out of performance, where characters can be worn like armour, and into a space where the real self is on display, can be fraught. Drew says the gamble with her talk show – that she’d be exposed to as much criticism as praise – was always worth it.
“I was more interested in being a part of the creative process, and having a seat at that table, because I loved everything that took place behind the scenes just as much as what happened in front of the camera.

“If you go on the other side of the camera, you’re going to hear a lot of things. I’m okay with that. It’s not always easy. Sometimes it’s hard to hear that stuff, but more times than not I just want to do something about it and get proactive. The older I get, the quicker that process gets and the less I need to make it anyone’s burden to carry my emotional baggage.”

“We live in a very un-gentle society – it’s hard to find the gentle on television. I want to bring that to our show.”

It has also helped her be more open-minded, she says. “Because people do not get A+ gold-star report cards throughout their life. Life just doesn’t work that way.” The Drew Barrymore Show has a very specific cadence, reflective of the woman whose personality permeates every part of it. Whereas some talk shows thrive on conflict or argument, it chooses to be uplifting and to focus on the positive. That energy has found particular resonance in present-day America where the airwaves, like much of the political and social discourse, are driven by anger, fear and conspiracy.

“I hate depressing stuff,” she says. “I have never been drawn to doing dramatic films that are really good but torture to get through. When someone recommends something and they say, ‘But it’s really heavy,’ I can almost guarantee you that I don’t want to suffer through it. That doesn’t mean
I don’t love drama or I don’t have a dark side, I just don’t tend to want to sit there for very long.”

And Drew’s own self-inflicted wounds, she says, have “come through behaviours and life lessons I’ve had to learn along the way.

“Life guarantees that you’re going to have to encounter really hard stuff, really trying times, really harsh life lessons, loss – all these things that are very challenging – to the point where you can almost question everything or lose connection to what’s important and why it all matters.

“But they’re still very momentary for me. I don’t stay stuck – stuck is heavy, and I don’t like heavy. I’m not trying to avoid it, but I definitely don’t gravitate towards it.” 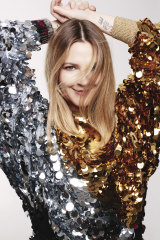 “I feel like giving people more room, understanding the differences … maybe that might actually be a part of growing up.”Credit:Anthony Maule/ Trunk Archive/ Snapper Images.

How are the rigours of producing the show working out? Well, the early-morning schedule required by the show – awake at 4.30am, in the office by 5.30am – is not too tough on Drew, who’s used to similar call times from her acting career.

“On movie sets they want you ready so they can start shooting right when the sun comes up,” she says. “And then I had two babies, and they certainly love to wake you up at 3am, 4am. So I think I have spent my whole life having to kind of suck it up and knowing that’s what I am supposed
to do, and need to do.”

And while the show is consciously apolitical, it could be argued that in the US, in 2021, the centre line is so narrow it’s difficult to walk it safely. Everything is political, it seems. And now, in the wake of a tidal wave of change, the oft-repeated line is that we must heal and move forward.

For Drew, healing is an exercise in understanding. “Being a better listener, knowing that the way I feel is not the way everybody feels … that’s not something I had understanding or awareness of [in the past],” she says. “And a way to be less naive is to understand that when you’re happy it may mean other people are in pain, or that other people don’t agree with you.

“I know that I don’t like harping on people’s differences – I like finding our common ground and similarities. But I don’t want to have optimism any more, [not with] blindness. I still want the show to acknowledge reality. And it’s hard because it’s not always welcomed in a show like ours.”

Growing up in Hollywood has left Drew wary of soapboxes. “They just piss me off. I rebelled and I would be alienated and I felt less inclined to lean in when someone was more and more in my face about something.

“So I feel like giving people more room, understanding the differences … maybe that might actually be a part of growing up.”

She reflects on how starting work at 11 months old has affected her. “I’ve always felt like a kid who’s playing house … where you’re supposed to be at in life is all higgledy-piggledy to me. But I know that I also really care about people’s feelings. So I try to think a lot about what I’m doing and saying.“

Earlier in our conversation, I’d remarked on how gentle her reunion with her ex-husband had been. She picks up on it again. “There was that word, gentle, and I thought to myself, ‘Oh, that’s an underrated word.’ It’s an underused word with such a gorgeous sentiment and meaning. And I think about that a lot. About the TV I grew up with, and how gentle it was. And now we live in a very un-gentle society – it’s hard to find the gentle on television. I want to bring that to our show.”

The Drew Barrymore Show will air weeknights at 7.30pm on Fox Arena and streaming via On Demand on Foxtel from tomorrow.

This article appears in Sunday Life magazine within the Sun-Herald and the Sunday Age on sale January 31. To read more from Sunday Life, visit The Sydney Morning Herald and The Age.

Find out the next TV shows, streaming series and movies to add to your must-sees. Sign up to get it every Thursday.