It would be overstating it to say that the Nationals are once again in crisis. Theirs is a broad and often fractious church, acting at times more like an affiliation of like-minded independents than a single, unified political party. The result has been a series of public squabbles and several leadership changes in recent years. Age reporter Rob Harris described them as “an ungovernable rabble” who were “so divided, resentful and dysfunctional that if [leader Barnaby] Joyce manages to hold them together until the election it will be with Band-Aids”. 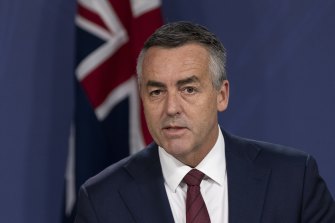 The decision by Victorian MP Darren Chester to remove himself from party-room meetings in frustration at the Nationals’ leadership is the latest example. But it points to a deeper fissure as Mr Joyce seeks to deal with his Liberal colleagues as they grind towards a plan for net zero emissions to tackle climate change.

One of the triggers for Mr Chester’s move is Mr Joyce’s refusal to rein in their more outspoken colleagues, particularly George Christensen, over controversial comments on the behaviour of police at the Melbourne protests and COVID-19 misinformation more generally.

“My decision,” Mr Chester said in a statement, “follows months of frustration with the repeated failure of the leadership to even attempt to moderate some of the more disrespectful and offensive views expressed by a minority of colleagues.”

Mr Joyce responded that any attempt to gag Mr Christensen, who is retiring anyway at the next election, would be a waste of time. He said it was a free-speech issue and on radio on Monday quoted Voltaire to that effect. Nothing to see here, folks, move right along? Perhaps. But if the Nationals really are fracturing around fringe issues such as COVID-19 denial and the right or otherwise of Mr Christensen to say whatever he wants, they will probably struggle to reach consensus over the generationally important issue of climate change and the push to reach zero emissions by 2050.

It goes without saying this is the most divisive policy problem the Nationals have faced in living memory, encompassing complex science, international obligations, farmers’ and miners’ livelihoods and the fear of economic pain. Many agendas, in other words, that must be woven together.

The issue here is ideology, certainly, but also timing, with the government planning to unveil its updated climate policy position next month ahead of the COP26 climate summit in Glasgow in November.

Mr Joyce is inching towards the consensus on this, but he will not back a policy of net zero emissions until the government demonstrates regional economies won’t be “footing the bill”. If he eventually adopts net zero, he must persuade his colleagues that combating climate change is in their constituents’ long-term interests, as it surely must be.

At the same time, he must suggest that not too much will change (they are conservatives after all) and their constituencies will not be economically disadvantaged by the transition to a low-carbon future.

Mr Chester is candid: he has no relationship with Mr Joyce. But he is one of the more progressive of the Nationals and a vital voice to have in the room during this most important debate. At the weekend, he and former Nationals leader Michael McCormack made a joint statement urging their colleagues to back greater climate action to ensure Australia can remain relevant on the international stage.

The key, echoing Mr Joyce’s messaging, is to find a path to net zero that “does not push power prices through the roof” or affect jobs in regional Australia. Their stance at least moves the discussion forward – unlike that of Senator Matt Canavan, who on Sunday tweeted: “I am deadset against net zero emissions.”

Rob Harris wrote on Sunday that Mr Joyce has already surprised some Liberal ministers since his return to the leadership as “disciplined, sensible and pragmatic”. If only the same could be said of the rest of the Nationals’ party room. In that context, losing Mr Chester to the climate debate – albeit temporarily – was regrettable.

The consequences are yet to be seen, but with the Glasgow conference looming, we will all be watching carefully.