HIS STATE AND FEDERAL CAREER

It is with great regret that we announce the death of Mr Alfred Deakin, which occurred at his residence, “Llanarth,” Walsh Street, South Yarra, at 7.30 am yesterday. Mr Deakin had been seriously ill for a long time. Three weeks ago he had a paralytic seizure, and this hastened his end. His friends had known for some days that there was no hope for his recovery. 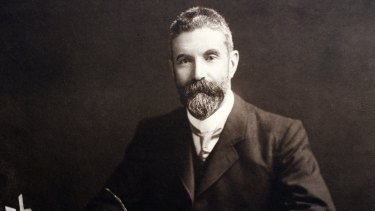 Alfred Deakin at his desk.

The death of Mr. Deakin will be mourned by all sections of the community. He first entered politics in 1879, after being connected for nearly two years with the editorial departments of “The Age” and “The Leader”. He was three times Prime Minister of Australia, and his retirement from politics at the beginning of 1913, owing to ill-health, came as a great blow to the Liberal Party, of which he was the leader.

Mr Deakin was 63 years of age.

The Federal Government has arranged for a State funeral to take place tomorrow. In the morning the remains will be conveyed from “Llanarth,” Walsh Street, South Yarra, to Federal Parliament House, and placed in the Queen’s Hall, where a special service will be conducted at 11 am by Archdeacon W. G. Hindley.

Mr Deakin is to be buried in St Kilda cemetery, close to the spot where his parents are interred. The funeral cortege will leave Parliament House at 11.30 am, and will proceed to St Kilda via Spring Street, Collins Street, Swanston Street, St Kilda Road, Wellington Street and Dandenong Road. It is expected that the pallbearers will be the Prime Minister, Mr Hughes; the leader of the Opposition in the Federal Parliament, Mr Tudor; the State Premier, Mr. Lawson; the Lord Mayor, Alderman Cabena; Sir Edmond Barton, representing the High Court bench; Sir Wm. Irvine, the Chief Justice; Sir John Grice, vice-chancellor of the University; and Mr. Franklin, headmaster of Melbourne Grammar School.

The death of Mr. Alfred Deakin removes a personality unique in Australian public life; certainly one of the most distinguished personalities that latter-day polities have known. His reputation went a long way outside this continent. The fact that he was three times Prime Minister of the Commonwealth, that he had been several times to London as representative both of the colony of Victoria and of the Federation, that he was for many years the head and front of Federalist and Imperialist sentiment in this country, was only a small part of his claim to distinction. He had rare gifts, and he had an exceptional character. Like other men, he had his limitations; in the sphere of hard practical politics these limitations showed themselves; but it is safe to say that no man with such gifts was ever more justly esteemed, and no man with such unblemished character was more widely loved by his countrymen. 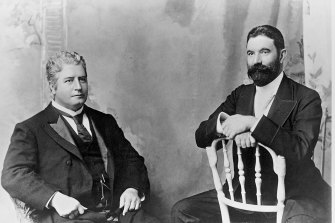 Edmund Barton (left) and Alfred Deakin, two fathers of the federation and the first two prime ministers of Australia.

Alfred Deakin was an Australia by birth as well as by upbringing. He was born at Fitzroy on 3rd August, 1856. His father, the late Mr William Deakin, was one of the early settlers who came to Australia from England about the time of the earliest gold rushes, but avoided the prevalent gold fever and settled in Melbourne. He was a well-known coach proprietor in the forties and fifties. His wife, the mother of the future Prime Minister, was the daughter of a Monmouthshire farmer. Alfred Deakin was a Melbourne Grammar School boy. Except for some private teachers when he was a mere child, that school was his alma mater from the first to last, and he only left it to go to the University. At the University Alfred Deakin paid some attention to law, with the view of qualifying for the bar, but before he actually qualified he had left the seat of learning to teach in a private high school in one of the suburbs. He passed his law examination in 1877, and was called to the Victorian bar in the same year, being then just 22.

The public career of Alfred Deakin began about this time; that is to say, about the time most young men are thinking much more of cricket records and football matches than the serious business of public life. The fact that he began so early enabled him to achieve success so early. Though he was not, as some men are, a born politician, and though he never really liked to give and take and tumble and make believe of the game, he had perception enough to realise that this arena was the only one that afforded scope enough for his abilities.

During the twenty years that he was a Victorian politician, Mr Deakin lived an eventful life. He had successes in full measure. His reputation grew steadily. His fame as an orator grew with it. Every gift the electors and his fellow members had to offer – short of the actual Premiership – came his way. He ran some risk of being spoilt being distinctions showered on him when most men are only beginning life; but his fine sense of fitness of thinks kept him from losing his head.

For the ten years prior to federation – from 1891 to 1901, when the first Commonwealth Parliament met – Mr Deakin was the most prominent Victorian Federalist in the field. His platform gifts alone would have put him in the front; but his personal character, his reputation for disinterestedness, and the high offices he had filled as a public man combined to make his advocacy of a United Australia more telling than that of any of his confreres.

He was a member of the Federation Conference held in Melbourne in 1890, at which New Zealand was represented. This conference was abortive; but in March 1897, ten delegates from each of the six Australian colonies were elected to a Convention which met that year in Adelaide; and it was this Convention that drew up the constitution under which Australia moves politically today.

In 1900, after the Constitution Bill had been ratified by the separate State Parliaments, and while it was waiting the approval of the Imperial Parliament, Mr Deakin was sent to London as Victorian delegate to which its progress, and to conduct any negotiations found necessary with the Downing Street authorities.

As a Federal politician, Mr Deakin’s name is written all over the early history of the Commonwealth. To recite even the main incidents would be merely to go over ground fresh in the memory of most people. When the first Commonwealth elections were held in March, 1901, he stood for Ballarat, and Ballarat returned him unopposed. When Sir Edmund Barton went to the High Court Bench in 1903, Mr Deakin stepped into his place as Prime Minister, retaining it till April, 1904, when he made way for Mr Watson. After the short-lived Watson and Reid-McLean Ministries, Mr Deakin came back to power in July 1905, as the result of an adverse motion which he, as leader of the Protection party, carried against Mr Reid. He represented Australia at the Imperial Conference in 1907. In the following year, in consequence of the Labor party withdrawing its support, he went out of office; but in 1909 came back again as Prime Minister for the third time, at the head of the ill-fated Fusion Government. On the defeat of the Fusion Ministry at the general elections of April, 1910, Mr Deakin became the leader of the Opposition in the House of Representatives. This was the beginning of the end of a brilliant political career. He resigned the post of Opposition leader and handed over the reins to Joseph Cook in January, 1913, retiring altogether from politics on the expiration of the fourth Commonwealth Parliament a few months later.