India has become embroiled in Australia's trade dispute with China as the country's politicians, media and human rights commission push for the Chinese government to allow dozens of Indian sailors trapped off China's coast to go home.

About 70 ships full of Australian coal but crewed by foreign seafarers including Indian citizens, have been waiting at Chinese ports for months as the country's government refuses to let them unload but importers and ship charterers are demanding the ships wait regardless. 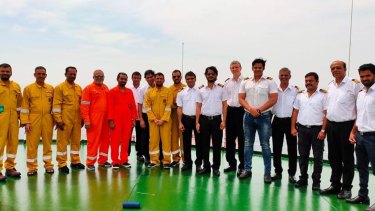 The crew of the carrier Anastasia are desperate to go home.

Like Australia, India has a tense relationship with China that deteriorated over the last year because of clashes at the countries' shared border, Indian bans on Chinese apps and concerns over China's increasingly muscular approach to foreign policy.

The Times Group, India's largest media conglomerate, has been campaigning on behalf of 39 Indian sailors stuck on two vessels, the Jag Anand and Anastasia, who have spoken of their despair at being trapped in Chinese waters for about 6 months as part of voyages that for some are nearing two years.

"Ever since we came to [the port of] Jingtang, the conditions of the crew and everyone are deteriorating," Shardul Mhatre, a sailor on the Jag Anand, told Indian TV. "It's horrible. We can't sleep at night, it's so cold."

"We haven't been on land for 12 months," Mr Mhatre said. "It's quite bad for mental health and people are suffering health issues over here such as skin problems, high blood pressure, diabetes."

"I've completed 18 months here [on the ship," said Ashwin Kumar Tandel, who is on the Anastasia. "My daughter was born last year. I am yet to see her. Please help me."

"It appears that the rights to life, dignity, equality and liberty of Indian seafarers have been trampled down by a member nation of United Nations," the commission said.

China and India have been trying to improve relations in recent months, after tensions between the world's two most populous countries rose to their highest levels in decades when soldiers from both countries were killed in a violent border clash in in the Himalayas in June last year.

Richard McGregor, a China analyst at the Lowy Institute, said he believed India was collateral damage in the dispute, with Australia the real target.

"China and India have been trying to patch things up or at least put a floor under their relationship for four or five months," Mr McGregor said.

"The damage to India is probably unwelcome [to China] because it broadens the base of critics and sours ties with New Delhi.

"The two sides reached some sort of formula to try to prevent further military conflict on the border and any miscalculations that might lead to that, and I don't think China at the moment wants to turn up the temperature of already existing tensions with New Delhi."

A spokesman for China's foreign ministry, Wang Wenbin, said the shipping companies were responsible for keeping the vessels at Chinese ports that did not permit crew change-overs to prevent coronavirus transmission.

Asked by a Japanese news agency whether the ships were held up because of China's disputes with India or Australia, Mr Wang said: "I don't see any links there".

But India's foreign ministry has taken up the case, with its Ambassador to China speaking with a vice minister of foreign affairs. It is pushing for a crew change either at sea, on shore in China or at a port in third country, spokesman Anurag Srivastava said.

"We expect that this assistance will be provided in an urgent, practical and time-bound manner, given the grave humanitarian situation that is developing on board the ships," Mr Srivastava said.

Gaurav Singh, an officer on the Anastasia, said despite India's advocacy the Chinese authorities had not budged.