Home » Lifestyle » Heidi Montag Gets Into Drunken Argument with 'A——' Brody Jenner on The Hills: New Beginnings

This was one helluva awkward way to end dinner.

Heidi Montag and Brody Jenner faced off in Wednesday’s new episode of “The Hills: New Beginnings,” thanks to an alcohol-fueled fight over his girlfriend Amber.

Picking up right where last week’s episode left off, Heidi was ready to confront Brody, who she felt was trying to “control” Amber’s alcohol intake. All night, Montag had been pushing for Brody’s GF to throw back cocktails and shots with her, while 24-year-old Amber made it clear she was worried Jenner — who is on a sober kick — would get mad if she got too tipsy.

After Audrina Patridge played telephone and told Jenner what Amber was saying, he didn’t believe her — and Audrina called on Heidi for backup. Montag, of course, didn’t hold back.

“She can do whatever she wants!” Heidi exclaimed as she walked over to Brody’s table. “No s—, Heidi,” he shot back, “You don’t know anything about our relationship, nothing.”

“You’re butting in our relationship. I just don’t want her to get black out wasted,” he explained, as Heidi told him to “take a breath” because he was “hyped up right now.”

Jenner had it at this point, telling Heidi that he didn’t want to speak with her anymore. “You’ve been drinking all night. It’s impossible to even talk to someone when you’re this drunk,” he told her. “Don’t talk to me until you’re sober.”

She stormed away from the table as she told Jenner to “chill out” because he had been “such an a—— all weekend” long. He let out a “Jesus Christ” as she walked away, before explaining in a confessional that he was the “furthest thing from controlling” and was simply “watching out” for Amber. As an awkward silence fell over the entire group, they all decided to go their separate ways and call it a night. 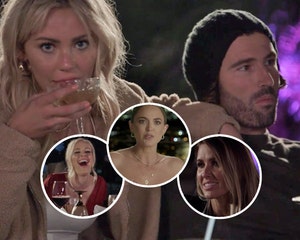 Everyone was a buzz about the previous night’s festivities the next morning, where Brody’s ex Kaitlynn Carter revealed she had a heart-to-heart with Amber as well. While the conversation happened off-camera, their audio was picked up on their microphones — with Amber saying Brody made her feel “like a f—ing alcoholic all the f—ing time” and asking Kaitlynn whether he also made her “feel like s—” when they were together.

Carter didn’t take the bait, simply telling Amber she didn’t want to say anything that would affect their relationship. Amber, meanwhile, said she didn’t remember anything that happened the previous night.

Brody and Heidi didn’t stay at odds long, with Montag showing up to Jenner’s suite to talk things out.

“I totally didn’t meant it for that to happen. I think that I probably overstepped a boundary with you and I was just trying to make Amber feel comfortable,” she said. “I definitely don’t want to fight with you or have any kind of problem. I’m not trying to get in your relationship.”

Brody claimed he and Amber talked about her drinking before they left for the trip — saying she told him, “Please try to help me make sure I don’t drink too much.”

“So here I am trying to come from a good place … so last night, I felt a little attacked because I was being called controlling,” he said to Heidi. “When Amber gets really drunk, she gets quiet, she doesn’t know how to formulate her thoughts that well … she doesn’t want to say no to you, she likes you.”

Saying she was coming from a good place too, Heidi apologized again, which Brody appreciated.

The episode ended with Brody then talking to Audrina about everything that went down, before he revealed that the entire trip made him realize he and Amber were at two very different places in their lives.

Calling it an “eye-opening” getaway, he said it confirmed to him that that’s “not what I need in my life right now. Romantically, things need to move on.”