Home » Lifestyle » How to keep it all together, given tomorrow is ‘Break-up Day’

If festive rom coms are to be believed, the holiday season is all about love. Consider Love Actually, it manages to shoehorn a wedding, new relationships, a childhood romance, affairs and even holiday sex into a mere 145 minutes.

But, far from the silver screen, more relationships are ending this month than at any other time of year. 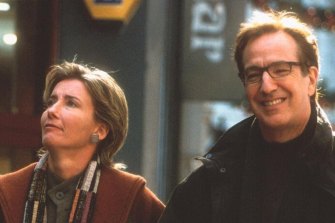 Emma Thompson and Alan Rickman in a scene from Love Actually (2003).

After analysing Facebook posts detailing breakups, data experts discovered December 11 was the most common day for it, outstripping splits at the beginning of the year and around Valentine’s Day. Other research has revealed a similar penchant for the "close but not too close" to the end of the year breakup: a recent UK survey showed that people believe the latest acceptable day to split before Christmas is December 6.

“I think as the year ends couples break up because they assume that the underlying issues they had in their relationship would have been fixed by now and they dread carrying the same issues into a new year,” dating expert Renee Slansky says.

“We tend to use this time of the year to reflect and ask ourselves what we really want and what’s not working out and then make decisions to either continue or end.”

Laura Hamilton-Gould, 36, had been with her boyfriend for seven months before ending the relationship in December 2018, and isn’t surprised that December 11 is the most common day for couples to split.

“We broke up on the 9th! This time of year, especially with the impending New Year puts your life into focus with those things and people who are important,” Hamilton-Gould says.

“I ended the relationship for various reasons, but the pressures of the Christmas period, making plans with family and friends put it all in perspective. Rather than looking forward to spending the Christmas period together with all the festive cheer that goes with it I was dreading the idea of sharing my friends and family with someone I ultimately didn’t want to be with.”

Perhaps brainwashed by the likes of Love Actually, I have generally believed being single over Christmas is more challenging. We singles are faced with boozy PDAs, questions about our love life from well meaning people only seen at Christmas, and no-one with whom to stoically face party season.

“In many cases people can become quite overwhelmed, which can lead to feelings of stress,” Lishman says. “And when people are stressed, they can become disconnected, irritable, and unhappy.”

Predictably, none of this is conducive to a healthy relationship. But there are steps you can take to safeguard your partnership at this time of year.

“We tend to use this time of the year to reflect and ask ourselves what we really want and what’s not working out and then make decisions to either continue or end.”

Take an old-school approach to your relationship

It can be tempting to share every aesthetically pleasing festive moment online, but Slansky says a digital detox can work wonders for your relationship.

“Put the phones away and be in the moment,” Slansky suggests. “The world doesn’t have to know your every move. Prioritise those that you know, not those you are trying to impress.”

She also recommends spend Christmas morning itself as a couple, before rushing off for family obligations.

“Take the time in the morning to instead just solely celebrate and focus on each other. A successful day usually begins with peace, joy and intention in the morning.”

“If you know you are vulnerable to stress – what can you put in place in terms of stress management to make sure you don’t get too stressed,” Lishman says. This can include scheduling in time to spend by yourself, relaxing exercise like yoga and walking, and putting boundaries in place with family.

Slansky agrees, adding it is important to prioritise your relationship: “Get comfortable with saying no so you don’t over commit.”

As well as being better for your bank balance, spending less reduces pressure to outdo yourself each year with a more elaborate gift. Not to mention, cheaper options like pre-loved or vintage items are better for the environment.

“My advice is to have a few regulations around spending on gifts if you know that it is an added stress. Whether this be joint gifts for family members, setting a budget or choosing to skip gifts altogether so the focus is on the amount of time spent together instead,” Slanksy says.

A little bit of relationship maintenance goes a long way

Lishman recommends making a conscious effort to avoid disconnecting during the busy time in the lead up to Christmas.

“[Try] date nights, time alone, and setting boundaries with family,” she suggests, adding that focusing on your own values and the meaning of this time for each other can also help.

Of course, life is messy and unpredictable, and relationships can come to an end despite our best efforts. If you do find yourself suddenly single at this time of year, don’t forget there is life after a breakup.

“Ending the relationship at that time was definitely the right decision, and although it was a bit of a sad Christmas it made for a much happier 2019.” Hamilton-Gould says. “I’ve since met the most incredible person who I cannot wait to spend the Christmas period with.”

Loneliness is a universal human experience that we all deal with from time to time. An analysis of a recent survey of 10,000 American adults found that 61% can be considered “lonely,” based on the UCLA Loneliness Scale, which assesses how often…