Home » Lifestyle » ‘I refuse to be a vaccination policeman’: Jab or no jab, Stefan will serve all. He’s not alone

“I absolutely refuse to become a vaccination policeman,” Stefan Roth says from the wheel of his delivery truck in Melbourne’s east.

“As a businessman, I will deliver my inventory to everyone, everywhere, whenever they want me, without discrimination, period.” 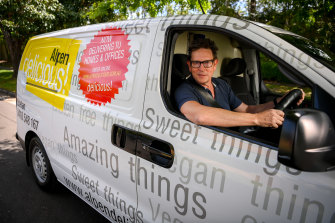 Stefan Roth is one of a burgeoning number of Melbourne businesses selling themselves as ‘non-discriminatory’.Credit:Eddie Jim

Mr Roth’s food delivery business has been non-contact since the pandemic began. He takes orders online and leaves his cakes and sweets at the door of his buyers.

Yet Mr Roth’s Alpen Delicious forms part of a burgeoning category of Victorian businesses advertising themselves as “non-discriminatory”, promising to serve customers regardless of their vaccination status as the state opens up.

“I’m sending a message: if you’re getting product from someone and they’re causing you grief because of your decision around the vaccine, there is an alternative,” continues Mr Roth, who says he received his first AstraZeneca dose last week.

The sole trader admits he is motivated in part by the prospect of securing extra business, through appealing to all segments of society. Equally, he admits his “non-discriminatory” stance could turn some customers off.

“But that is why I take all the precautions I do when I make a delivery. My approach is the same no matter how wary you are of COVID.”

As part of the national reopening plan, Victorians must demonstrate they have been fully vaccinated to enter pubs, shop at retail stores, get a haircut or undergo a beauty procedure from Friday. 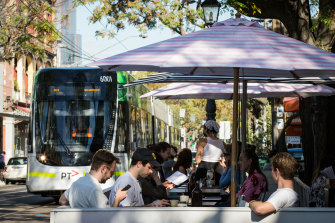 A “non-discriminatory” economy is emerging in response. Online directories allow businesses to state their credentials and equivalent Facebook communities have also grown. A group specifically for the Mornington Peninsula has attracted almost 9000 members.

Multiple businesses – in particular hospitality venues – have chosen to remain takeaway only on the principle of opposing “discrimination”.

Many others, seemingly unperturbed by the threat of state government fines up to $109,000, have advertised their willingness to serve unvaccinated visitors despite the law.

One Greek eatery pledged to continuing serving its loukoumades (Greek doughnuts) to all customers, irrespective of their vaccination status.

“Down the track, once this is all over, I’d like people to know I stayed true to myself.”

No businesses planning to open to the unvaccinated were willing to speak publicly with The Age as they feared punishment. However, one beautician said she had been contacting clients to advise them her Melbourne salon would not be checking vaccination passports.

“I grew up copping abuse for my skin colour and I just refuse to enforce any kind of discrimination,” she told The Age. “I’ve set up cameras in my store and if police want to fine me, I’ll tell them I’ll wipe my ass with it.”

Like Mr Roth, Kaity Marsh has listed her home hairdressing business on an “all welcome” directory – although she has no plans to open in the immediate future.

Ms Marsh, 31, says she is hesitant to get the jab and even more so to demand her clients be vaccinated.

But financial reality is encroaching on her principles. She has hundreds of dollars in deposits she may have to return and will probably cancel a lucrative booking at a wedding next month.

“I’m not afraid to lose a client or have a discussion over this,” she says. “I decided to list myself as non-discriminatory because it sits well with who I am. Down the track, once this is all over, I’d like people to know I stayed true to myself.” 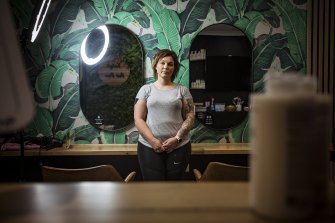 Kaity Marsh is in a quandary as she juggles her principles versus her income.Credit:Chris Hopkins

After sharing her position on her personal and professional social media pages, Ms Marsh felt the brunt of the polarised, emotional debate that swarms those who refuse to get vaccinated.

Some customers have asked whether she can serve them and pretend they are friends visiting her home – allowed under the restrictions – while others, including her close circle, have attacked her.

“I have a vaccine booking for the end of next month, but I’m waiting to see how everything unfolds. Really, I’m hoping this mandate goes away.”

Premier Daniel Andrews insists it will not any time soon. He warned this week that restrictions for unvaccinated people will stretch “well into 2022”, at least until the Formula One Grand Prix in April.

It’s a more strident position than in NSW, where restrictions on the unvaccinated will be lifted on December 1.

Victoria’s authorised worker mandate is also the most wide-ranging in the country, estimated to apply to 1.25 million people including hospitality workers, teachers, police and state MPs.

The Pfizer, AstraZeneca and Moderna vaccines available in Australia are safe and extremely effective, including against the Delta variant of COVID-19.

France and Italy are among the countries to have mandated vaccines for entry to indoor sites such as restaurants. So too New York, where fines up to $US5000 ($6900) apply, predictably sparking fury from some customers who lambasted venues as promoting segregation – a trend already appearing in Victoria.

On the other side of the United States, an Italian eatery in California demanded proof of being unvaccinated for entry.

“We have zero tolerance for treasonous, anti-American stupidity,” stated a sign at the door of Basilico’s Paste E Vino.

While such a sentiment is less widespread in Victoria, where more than 90 per cent of the population have received at least one dose, Grand Hotel Healesville publican Lisa McKay says her decision not to open to guests on Friday is supported by the large majority of her community.

“One problem is staff. Only one-quarter of the employees I need to operate the pub have been fully jabbed (as required by the state). Even if I had the workers, I wouldn’t be opening yet,” says Ms McKay. 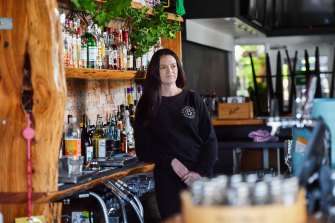 Lisa McKay, publican at Grand Hotel Healesville. “Even if I had the workers, I wouldn’t be opening yet.”Credit:Joe Armao

She concedes her stance cannot continue eternally: she will operate the Grand Hotel, on Melbourne’s eastern fringe as takeaway-only for as long as it is financially viable.

“We refuse to divide our community based on their vaccination status. If we do open only to some, it will be a very sad day,” the publican says.

“All our regulars don’t have an issue with our decision. The ones that are double jabbed are pretty disappointed that they can’t come in for a beer and a meal, but they totally understand. We’re going to hold out as long as we can.”

More restaurants have taken to social media to state a similar position, from Brightbird Espresso cafe in Warrnambool to Pizza Farro in inner-city Fitzroy, which says denying some diners “does not match what we stand for”.

For any businesses who illegally serve the unvaccinated, the state government says up to 100 teams of authorised officers will be patrolling, with the ability to issue fines from $1817 up to $109,044 plus the threat of being hauled before court.

Dr Brent Coker, a marketing and electronic commerce expert with the University of Melbourne, says picking one side of a loaded debate can be a dangerous play for businesses.

Instead, businesses believe they are extending a branch of support to people who choose not to or cannot get vaccinated, according to Dr Coker.

“Perhaps they think ‘great, if I cater to those without the jab, I’m picking up a neglected part of the market’. But the reality can be that if there’s a large part of the population that disagrees with that view, it may push customers away,” he says.

“It may be effective in some cases, if a brand sells their story as standing up for the minority, which isn’t necessarily unhinged anti-vaxxers. I just think at the moment there’s a negativity in society against those who are pushing back.”