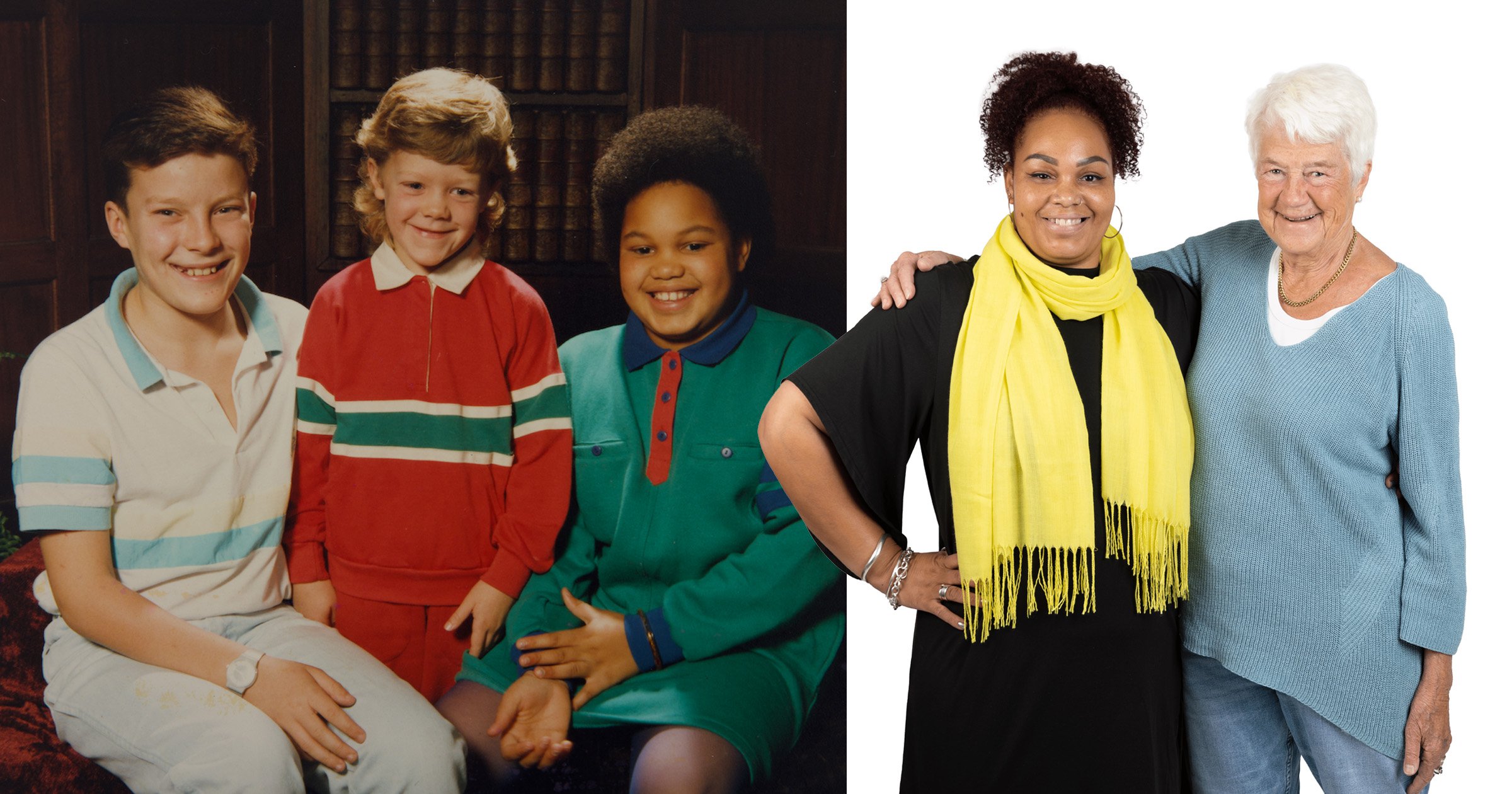 As a child, I used to cry when my mum brushed my hair.

I’m mixed-race, but both my adoptive parents are white, which means my mum didn’t really know what to do with my hair.

Her solution was to just cut it really short so that brushing it wouldn’t upset me too much.

That’s just one of the ways being the only non-white person in my family – or in the wider town I grew up in – affected me. Thankfully, over time, I’ve come to embrace my mixed-race identity, including later connecting with my Caribbean heritage on my father’s side.

I was adopted at six weeks old by my mum and dad and grew up with two siblings – who are my parents’ birth children – in a little village in West Yorkshire. We were surrounded by sheep, cows and fields – it was an amazing place to live and I had a really wonderful childhood.

My mum and dad had always been open and honest about my adoption and they reassured me that they would always support me if I ever wanted to find my birth parents when I got older.

In fact, I had a page of information from the adoption agency that briefly explained the reasons why I came to be adopted and a little bit about my birth mum and dad. From a young age, I used to take myself off somewhere quiet now and again to read this.

Growing up, being non-white wasn’t really an issue. I was treated the same as everybody else and it wasn’t something I gave a lot of thought to at that time in my life.

But as I got older, that’s when I started to struggle with things like my hair. In those days, there was nowhere my mum could go for support and advice – there was no internet or YouTube tutorials like there are now.

When I was around eight years old, my mum went to a supermarket and met a lovely Black woman who happened to be a hairdresser. They got talking and my mum told her about the struggles with my afro. The woman offered to come and help.

The first time I met her, I felt really excited to be in the company of somebody who looked like me. I remember thinking she had beautiful skin and smelled really nice.

She visited regularly until I reached my teenage years and taught me how to manage my hair and what creams to use. This was really special and she became a sort of saviour to me – changing how I felt about my tresses in relation to my Black identity.

Unfortunately, we lost touch but I will always remember her and how much she helped Mum and I.

I didn’t know or have contact with any other Black people at that time in my life and I remember finding it fascinating to see people of colour on the television.

When I was about 12, I used to sit in front of the video recorder while I watched television. Every time a Black person came on the screen, I would record it. I ended up with about four full video tapes that contained various programmes, adverts and documentaries.

I would often sit on my own and watch these videos over and over again. I wanted to explore that world that I wasn’t connected to.

It wasn’t until I went to college that issues arose regarding my identity because it was the first time I really mixed with other Black people of my own age.

It felt exciting to me, but I experienced a lot of negativity and name-calling – things such as being called a ‘coconut’ (Black on the outside but white inside) and ‘posh’. I would be mocked because I didn’t understand the slang words they used.

I felt really alone and like I didn’t belong anywhere. I wasn’t white and yet felt rejected by Black people.

At the age of 17, I started having conversations with my adoptive family about finding my birth parents. They fully supported me to do so and helped me on my journey.

I think the need I felt to meet my birth parents stemmed from my confusion of who I was, and I realised I really needed to work out my identity and where I came from.

So I started having counselling at an adoption service to help me prepare in meeting my birth parents.

After a few sessions, I was told by the agency that my birth parents had left letters and photos for me in the hope that I would one day try to find them. It felt surreal that after all these years, I may finally meet them. It was both scary and exciting.

I got in touch and we wrote letters back and forth, so I got to learn about them and their families.

When the time came to meet up, I decided to see my dad first because he was Black and that’s the thing that was missing for me. My best friend came along to support me.

I remember arriving at the agency first and feeling really excited at the prospect of finally meeting the man who was my birth dad. As I entered the room, I looked back at my friend and she gave me two thumbs up. That initial interaction is a bit of a blur but I recall thinking that I looked like him.

It was exciting, surreal and strange all at the same time – but it really was the missing piece of the puzzle.

I spent a lot of time with my birth dad and his family over the next few years. At one point, I felt like I wanted to be there all the time because I had missed so much.

It felt incredible to learn about where I came from. I connected to my Jamaican and Bajan heritage and culture by learning about the food – when I ate rice, peas and curried meat for the first time, I loved it! – listening to the music and spending time with my birth family, who looked like me.

It’s hard to describe how powerful that was.

A couple of weeks after meeting my birth dad, I met my birth mum for the first time. This was harder for me as she was very emotional. To her, I was her daughter but to me, she felt like a stranger.

Now as an adult, I don’t feel like I am completely in touch with my culture and heritage – probably because of my negative experiences growing up.

I feel incredibly lucky that I had such a wonderful childhood with a family who always loved me unconditionally. The one and only thing I wish could have been different would have been to integrate with people who looked like me.

That’s why I am so passionate about using my own experience to help other people. I don’t want other adoptees to grow up feeling disconnected from their identity.

My advice to parents of children from a different background would be to support the child in embracing their heritage and culture. Talk about the history of their race, listen to music originating from their country, explore and cook food from their culture. Most importantly, enable their child to mix with other people who look like them.

This perspective has come in handy because my adoptive white sister adopted two Black boys when they were 13 months and 15 months old. They are so precious to me.

It’s really special that I can use my own personal experience to help them and also to help my sister with managing their hair, creaming their skin and teaching them about their own culture, which is so important.

It comforts me that I can be there for the boys, as somebody who has lived experience and understands the issues of being trans-racially adopted. I just hope that my understanding and support of them will benefit their lives in a positive way.

I just want them to be as happy as possible.

Emma is supporting You Can Adopt’s National Adoption Week campaign, which this year focuses on the theme of identity. ‘You Can Adopt’ will explore adopted people’s reflections on their relationships from before, during, and after they were adopted, connect them to their heritage, and understand how this helped them develop a sense of their identity as they grew up. For more, visit their website here.

October marks Black History Month, which reflects on the achievements, cultures and contributions of Black people in the UK and across the globe, as well as educating others about the diverse history of those from African and Caribbean descent.

For more information about the events and celebrations that are taking place this year, visit the official Black History Month website.