Conservative firebrand Jacinta Nampijinpa Price has made a furious, impassioned entrance into the Senate, railing against “false narratives” of racism and calling the push for an Indigenous Voice to parliament a symbolic gesture that could divide black and white Australia.

The stance of the Warlpiri-Celtic woman from Alice Springs, now a Coalition senator, underscores the challenge before the 47th parliament after the Albanese government set the goal of holding a referendum next year to entrench an Indigenous Voice to parliament in the constitution. 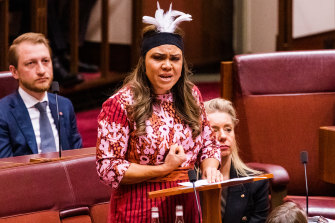 Without support from the Coalition, the push for constitutional recognition will struggle to garner the widespread support needed for a referendum to be successful.

Price used her first speech to parliament to single out what she called “platitudes of motherhood statements from our now prime minister”, saying Anthony Albanese had suggested “without any evidence whatsoever, that our Voice to parliament bestowed upon us through the virtuous act of symbolic gesture by this government is what is going to empower us”.

“This government has yet to demonstrate how this proposed Voice will deliver practical outcomes and unite rather than drive a wedge further between Indigenous and non-Indigenous Australia,” Price said.

The Uluru Statement of the Heart, which has been endorsed by hundreds of Indigenous leaders, calls for the creation of an Indigenous Voice to parliament. But Price argued Indigenous Australians had not reached a unified agreement on the Uluru statement, and attacked the suggestion by the Albanese government that the Voice referendum could be put to the Australian people without the detail of the model being finalised.

“It would be far more dignifying if we were recognised and respected as individuals in our own right, who are not simply defined by our racial heritage, but by the content of our character.”

Calling out “pointless virtue-signalling”, Price called for “real solutions” to the high rates of domestic violence and alcoholism among Indigenous communities in the NT and dismissed “false narratives that suggest racism is the cause”.

Price is one of 11 Indigenous Australians in the 47th parliament, the most diverse in the nation’s history. Her speech was in stark contrast to those given by Indigenous Labor women, Lingiari MP Marion Scrymgour and senator Jana Stewart, who also made their first speeches to parliament on Wednesday.

Scrymgour, who was a facilitator in the dialogues that led to the Uluru Statement, said “I know full well that that initiative is not mere symbolism. I am proud to be part of a government which is going to take long overdue action on this front”.

In the lower house Scrymgour, whose electorate spans 99 per cent of the NT, used her speech to note the paradox of her joining a layer of government that once regulated her parents’ lives through the Aboriginal Ordinance Act.

“My pride in commencing my formal role in this House of Representatives is tinged with sadness. I am essentially becoming part of the same government which designated both my parents as wards of the State, the ‘State’ being the Commonwealth of Australia,” she said.

Stewart in her speech spoke of the historical genocide of Indigenous Australians and “the weight of collective shame and guilt we carry because of our history” being a barrier to Australia’s success as a rich, multicultural nation.

Cut through the noise of federal politics with news, views and expert analysis from Jacqueline Maley. Subscribers can sign up to our weekly Inside Politics newsletter here.