When he was growing up in Redfern, Kamilaroi artist Dennis Golding was a familiar sight running around the area in his beloved Batman cape.

“I loved comic books,” he says. “I loved all the superhero TV shows and Batman was my favourite.”

And the superhero power young Dennis wanted most for himself was to be invisible. 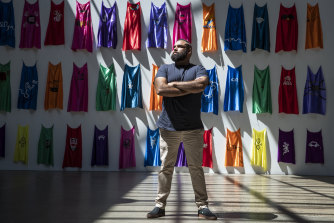 Dennis Golding with some of the multi-hued capes created by the youngsters.Credit:Louie Douvis

“As black kids living in The Block we were monitored and surveilled by the police. That feeling was uncomfortable in many ways and I remember when I was dressed as Batman I tried hiding and being invisible. That was a really powerful thing.”

Now 32, the feeling of power and joy conferred by wearing a cape has stayed with Golding and forms the centrepiece of a new work on show at Carriageworks, a collaboration with Aboriginal and Torres Strait Islander pupils at nearby Alexandria Park Community School.

The work is made up of some 60 brightly coloured superhero capes, each decorated with a symbol or motif that is significant to the particular youngster.

“A lot of these kids are from the same community I grew up in, so it was really nice to start the workshops already having that connection through community,” says Golding. “Each student was asked to challenge themselves and how they see culture, identity and community, and to try to contextualise those themes together so they can create their own symbols.”

One recurring theme chosen by the pupils was animals – from turtles to kangaroos, referencing their people’s country – whether they are “freshwater people or saltwater mob”.

“The goal given to each student was to challenge themselves and to think about how they see culture,” says Golding.

The result is a stunning and touching multi-hued assemblage representing the hopes, dreams and cultural identity of the children.

Golding’s own inspiration to become an artist came from his mother.

“She worked predominantly in painting with acrylic on canvas, but also I remember as a kid, when I was about three or four years old, seeing mum being in the back of the studio of our terraced house creating these larger paintings on fabric and different canvas boards. I was just so interested and she handed me the paintbrush.”

That early encouragement ended up with Golding studying at the University of NSW College of Fine Arts. Last year, he became the first Indigenous artist to be awarded the $30,000 Create NSW emerging artist fellowship.

“Later, when I started taking art seriously, I started to question and consider why do we paint in this certain style? Why do we use acrylic? I really wanted to expand and not just be limited to painting on canvas.”

Golding’s latest work is titled The Future is Here.

“The future is here because these young people have something to say,” he explains. “The young people in this show are our future. They’re our young leaders who have already shown leadership through this workshop because they’ve started to articulate these ways of how young people can empower themselves, and how they can empower identity in their culture and their community.”

The Booklist is a weekly newsletter for book lovers from books editor Jason Steger. Get it delivered every Friday.