The government’s omnibus of industrial relations reforms will face a Senate fight unless it capitulates on its changes to casual employment rules after the union movement took a hard line stance to oppose the change regardless of what else is in the overhaul.

Australian Council of Trade Unions secretary Sally McManus said Labor and the crossbench should torpedo the reforms unless unions win restrictions on the use of casual work and powers for the industrial tribunal to force businesses to make some casuals permanent. 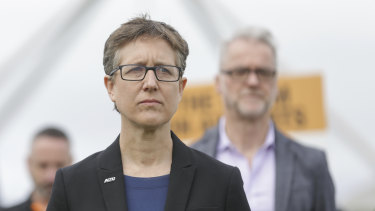 ACTU secretary Sally McManus has urged the crossbench not to pass the government’s industrial bill unless changes are made. Credit:Alex Ellinghausen

A new Griffith University study bolsters Ms McManus’ argument, finding many workers commonly defined as casuals report being denied benefits including extra pay and time off, which are supposed to make up for insecure work.

The report, funded by the mining union, draws on unreleased Australian Bureau of Statistics data to conclude a majority of “casuals” are actually relatively long-term workers, with at least one year of service and an expectation they will stay for at least another year.

The government on Monday unveiled proposed laws to force employers to offer permanent work to casual staff working regular hours after a year and a new definition of casual work, constraining it to people without a “firm advance commitment” to more work.

It argues the laws will create jobs, address court rulings that could force businesses to cover billions in leave entitlements for casuals and make the rules clearer.

Workers will be able to go to the Fair Work Commission for mediation if their employer refuses to offer conversion but it will have no power to force bosses to provide permanent work.

“If … it’s not fixed, then we believe that all the opposition parties should vote against it,” Ms McManus said.

The government plans to move its industrial laws in one bloc after they are examined by a committee over summer and if Labor and the Greens oppose it they need the votes of three of five crossbenchers, who all said they would consider the laws when they are released in full.

Ms McManus pointed to the report by Griffith University Professor David Peetz to argue casuals were being ripped off and the government's bill needed to change.

“This report shows that alleged double dipping is a total myth,” Ms McManus said. Casuals were more likely to be low paid, subject to wage theft and did not get the same security or benefits as other workers, she said. “So they’re not dipping at all, let alone double dipping.”

A spokeswoman for the Australian Chamber of Commerce and Industry said the report was trying to establish a “false and misleading narrative which tries to demonise legitimate casual employment”.

Some of the workers who told the ABS they are not getting a casual loading likely have it built into their base pay while others are being underpaid, Professor Peetz suggests. “‘Casual’ employment reduces employee entitlements (often without any offsetting ‘loading’) under the guise of providing necessary flexibility,” Professor Peetz writes.

Conciliation overwhelmingly resolved disputes about casual work, Mr Porter said, and claims could go to the courts as a last resort.