Home » Lifestyle » It’s all in a name: Westworld star vows to reclaim her identity

I see another celebrity has gone and changed their name. Well, not so fast. This is no Andrew G to Osher Gunsberg situation.

Well, what’s going on then? British actor Thandiwe Newton has revealed she will no longer go by the name “Thandie” after 30 years in the film and TV business. But it’s not really a name-change, it’s a reclamation of the one she was given at birth. 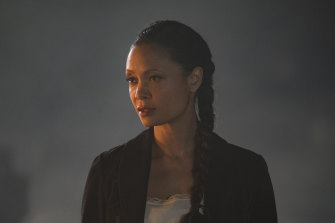 Wait. But if Thandiwe was always her name, why did she use another one? It all came down to a spelling mistake. Newton told British Vogue that the W was mistakenly left out in her very first screen credit and she had stuck with “Thandie” since. Although she didn’t name the project by name, it is believed she is referring to the 1991 Australian film Flirting, given this was her film debut.

Remind me: What is Thandiwe Newton famous for again? You probably know her from HBO’s science fiction series Westworld. She also portrayed the criminal Val in the 2018 film Solo: A Star Wars Story. Along the way, she’s picked up an Emmy and a British Academy Film Award.

Why is she changing her on-screen name now? ″It’s always been my name,” Newton told Vogue. “I’m taking back what’s mine.”

Did racism have a role to play in the original typo? While Newton didn’t assign any specific motivation or cause to the error in her Vogue interview, she did suggest that for much of her career she has felt either invisible or put in a box due to the colour of her skin. She went on to say that she wants people to “truly see” her and that she doesn’t want to participate in the “objectification of Black people”.

Where does her name come from? Thandiwe means “beloved” in Shona, a Bantu language spoken by the Shona people (who primarily reside in Zimbabwe). Newton’s name was given to her because her mother is the granddaughter of a Shona chief.

Has this sort of thing happened before? There is a long history of celebrities using tweaked, or entirely new, versions of their birth names. The Wizard of Oz star Judy Garland, for example, was born Ethel Gumm. The Office’s Mindy Kaling started using her public surname early on in her standup comedy career after finding that too many MCs couldn’t pronounce the one she was given at birth: Chokalingam. Whatever your opinion on people Anglicising their names, the key issue is whether or not it was that person’s choice to begin with. In Newton’s case, it appears it wasn’t.

When can we expect to see Thandiwe Newton properly credited on our screens? Newton has two forthcoming films. The first, Reminiscence, is an American science fiction thriller starring Hugh Jackman. It’s slated for release later this year. The second, All the Old Knives, is currently in production. A fourth season of Westworld is also due to start shooting later this year.