Home » Lifestyle » JAN MOIR: Get the fairy lights up for this Christmas

JAN MOIR: Get the fairy lights up… we need this Christmas to be visible from space!

The burning question of the week is this — is it too early to put up your Christmas decorations?

Trees and decorations traditionally start going on display when Advent begins on the fourth Sunday before Christmas.

But that is a whole nine days away! Some people can hang on for no longer.

It may buck tradition, it may go against the festive grain, but surely the sooner we get our halls decked with spirit-raising holly and ivy, the better it will be for everyone?

Readers, on this matter let me be emphatic, now is the time to drag the dekkies down from the attic. 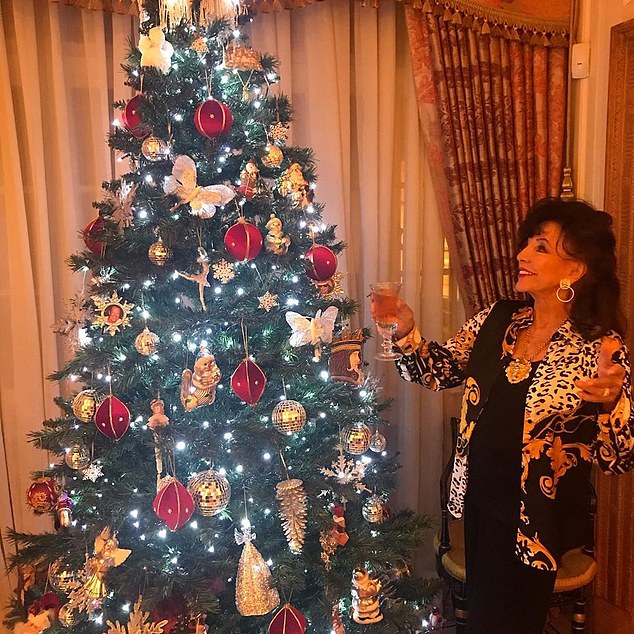 JAN MOIR: The burning question of the week is this — is it too early to put up your Christmas decorations? Pictured: Joan Collins putting up her Christmas Tree this year 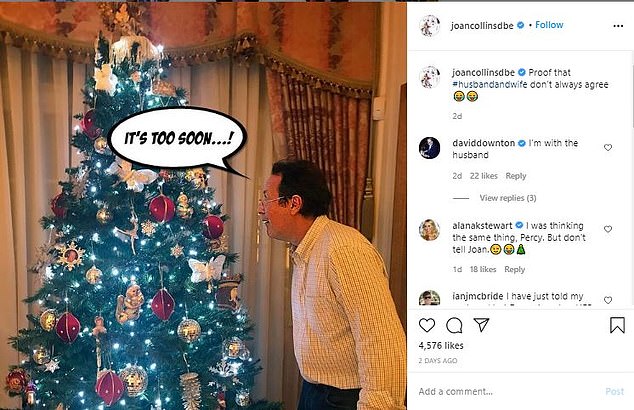 To grinches and disbelievers it might be an untimely drag, but early-onset decorating is an act of defiance this year, a howl against the restrictive encroachments and the worries of 2020. So yes, get your jingle on, why wait?

Jane Fonda has posted a picture of her fully accessorised tree on Instagram. ‘Screw it! I’m going to decorate!’ she wrote this week.

Meanwhile, actress January Jones has posted a selfie posing by her Christmas tree, holding a giant Santa doll and wearing reindeer slippers. ‘Judge away,’ she declared, adding her decorations were done on, gasp, November 1.

Tan France, the British star of Queer Eye For The Straight Guy also has his tree on display. ‘Haters, back off,’ he joked. But really, what is not to love?

In a normal year it would be far too early. Premature baubling and the flagrant display of untimely tinsel is simply not done in the nation’s best streets and avenues.

(Oh my God look at her, with her frosted garlands hanging out and we’re only halfway through November.)

But this has not been a normal year. Anything but.

And while we cannot control what happens outside our homes over this festive season, we can command operations inside, where home and hearth have become more important than ever.

And what is going on inside mine is going to be fairy lights visible from outer space and three trees at least. Parp, parp, woman with baubles coming though. Don’t try to stop me.

In my part of London, decorated trees are already up and unashamed, beaming from windows in many homes.

This never happens around here, where hedges are neatly clipped and neighbours are sticklers for rules.

Yet walking home in the wintry dusk on Tuesday, I espied two girls in their front room, helping Mummy to hang the decorations on their tree; two little sprouts rosy with the excitement of it all.

It nearly made me cry, as nearly everything Christmas-related seems to at the moment.

A glitter snowman hanging from the mirror of a taxi cab, where the driver explains his takings are down 80 per cent this year; a holly wreath on the door of a restaurant trying to survive on doing takeaways only?

These trinkets and baubles are not cheap decorations, they are totems to the human spirit; beacons of starry hope as we sail on into an uncertain future.

And yet . . . another part of me wonders if, by pinning up the holly and the ivy early, we are pinning too much on Christmas? 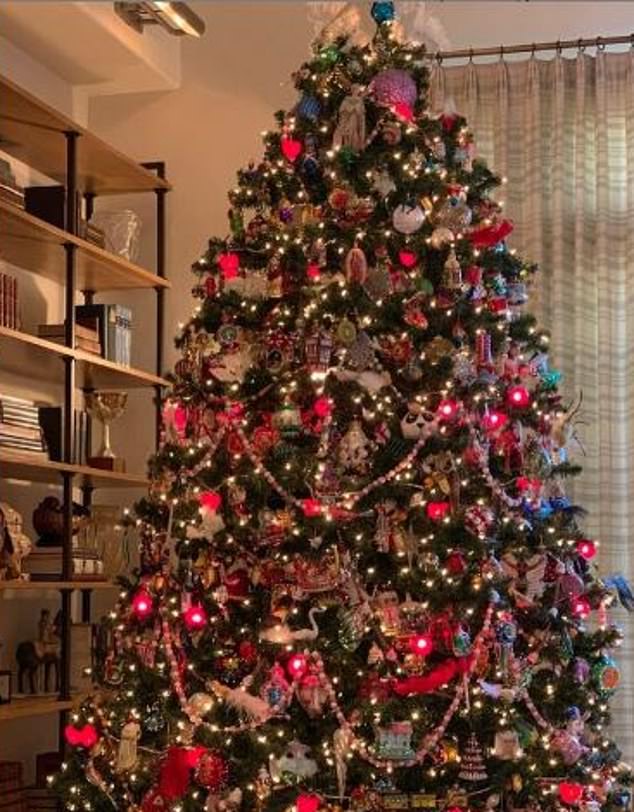 Jane Fonda has posted a picture of her fully accessorised tree on Instagram. ‘Screw it! I’m going to decorate!’ she wrote this week

Is it really worth a month of severe lockdown in January just to celebrate with friends and family?

On BBC Radio 4’s Today programme yesterday, a gloomster member of the Government’s Scientific Advisory Group for Emergencies explained that Christmas socialising will come with substantial risks this year — but when does it not?

In the manner of a strict headmaster addressing an unruly class, Professor Andrew Hayward told the nation that we are putting ‘far too much emphasis on having a near-normal Christmas’ because ‘respiratory infections peak in January’.

My personal view is that he’s probably right. I mean, fair point.

The virus isn’t going to take a break from tormenting and infecting the country just so we can all have a nice time together over the turkey and stuffing.

I’m not going to Scotland to see my mother — not just because Nicola Sturgeon doesn’t want me to, but because I don’t want to expose my country-living folks to my thick soup of London germs — or expose myself to any I might pick up en route.

But if families and friends are willing to take a risk together — and for many, that risk will be minimal — then I feel they should be allowed to do so.

It doesn’t help that the Covid festive restrictions are so complicated and vary from region to region.

Three members of five families may bubble up in the open air until 6pm, but neither friend nor foe can kiss under the common mistletoe.

Grandparents may meet with grandchildren but all must wear plastic macs and sou’westers while playing charades.

The pulling of crackers is forbidden. Ditto the Hokey Cokey. Ditto toddy for everybody, if mixed in a communal bowl.

Christmas 2020 is going to be a bit of a nightmare, to be honest.

No one knows where it is all going from here, which is another good reason why it is imperative to bear the judgmental looks from neighbours and get those decorations up early.

The world just looks better, when basking in the glow of a lot of fairy lights and a little bit of hope.

TV fame is a privilege not a right

Eamonn Holmes has been on television every weekday for the past 30 years.

At least that is how it seems. And his wife Ruth isn’t far behind.

They have been stalwarts of the daytime schedules since the invention of the cathode ray tube and have presented the Friday episode of This Morning since 2006.

That is a good run, by any standards.

Now they have been ‘let go’ in a shake-up of personnel at ITV. A new diversity drive sees them replaced by Alison Hammond and Dermot O’Leary — and they don’t seem to be taking it too well. 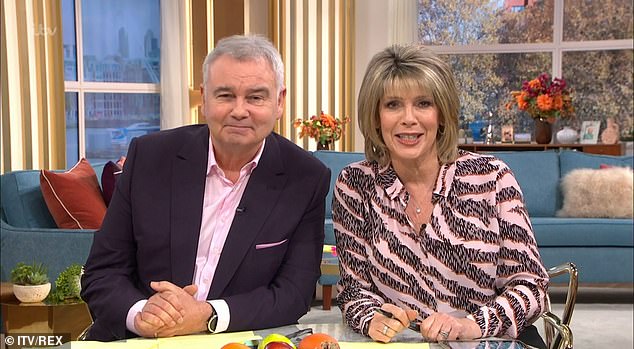 Eamonn Holmes has been on television every weekday for the past 30 years. At least that is how it seems. And his wife Ruth isn’t far behind

Eamonn is reportedly ‘furious and upset’ — so what’s new?

Meanwhile, in a recent interview, Ruth seemed to disparage younger presenters who lack experience. ‘We’ve put the work in.

‘We didn’t do a reality show and get an overnight job on the telly,’ she said, adding that her hubs even got ‘an OBE for services to broadcasting’.

When are BBC women, television presenters and sundry sacked stars going to realise that jobs like theirs are a privilege not an entitlement?

And that careers in showbusiness, just like careers in politics, almost always end in tears.

Thanks for sharing, Jen

The Friends star (pictured) has ‘shared’ some of her favourite products from the range, including the Collagen Peptides powder, clementine-flavoured Vitality Immune Booster sticks and a vanilla Collagen Creamer. So nice of her to do this!

In other news, Gary Lineker is the new Innovational Executive for Walkers Crisps and Julia Roberts is the Visionary International Content Officer for Lancome perfumes. Celebs — they just never stop giving. 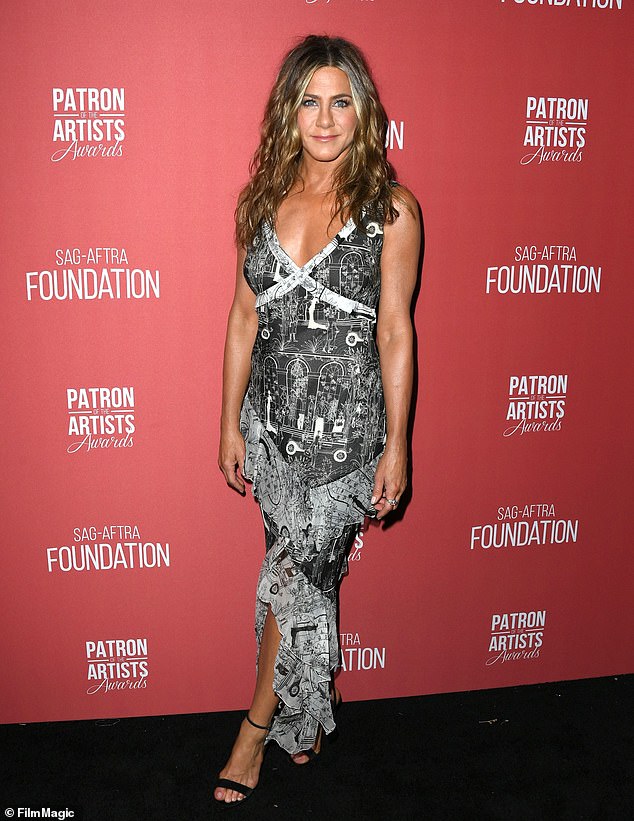 Will it be here today, gondola tomorrow for gorgeous Mel?

What is going on with Melanie Sykes and her gondolier lover? Why are there always so many cameras around the canals of Venice to snap their every smooch and snog?

The whole thing is a mystery, but I do worry about 50-year-old Melanie.

Holiday romances are a wonderful thing, but few of them last — should she really have gone back this week to nestle once more in the muscled arms of her 23-year-old lover? 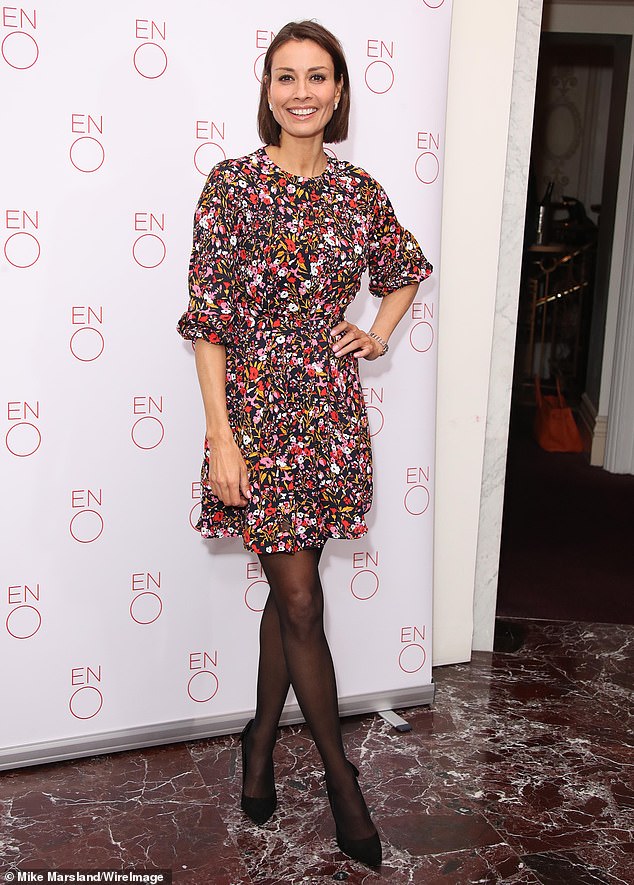 What is going on with Melanie Sykes and her gondolier lover? Why are there always so many cameras around the canals of Venice to snap their every smooch and snog?

Riccardo obviously floats her boat — or is it all some ghastly publicity stunt to promote a new flavour of Cornetto, or perhaps a cutting edge menopausal treatment that guarantees to put a bit of phwoar in a girl’s oar?

One hopes for a happy ending for Melanie (right), whose search for tru luv has taken many, many turns.

And good to know that, despite pandemic restrictions in Venice, cafes and restaurants remain open while the gondolas are still ‘on service’. I’ll say.

This year, the young audiences on Radio 1 will hear an edited version of the Pogues classic Christmas song, Fairytale Of New York.

The edited version of the song has been provided by the record company and replaces the homophobic slur ‘faggot’ and the misogynistic word ‘slut’ with more anodyne words.

Fine by me. Neither of those words has any place in polite society or pop music broadcasting.

This is not a censorship hill to die on, nor is it the death of rock ‘n’ roll as we know it. It is a reasonable compromise. 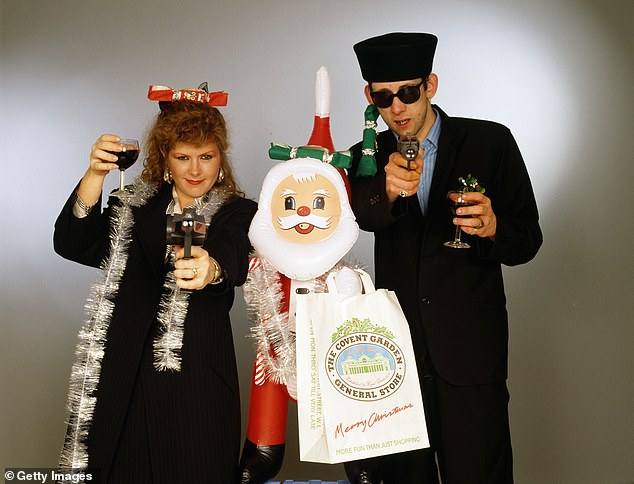 This year, the young audiences on Radio 1 will hear an edited version of the Pogues classic Christmas song, Fairytale Of New York

However, it is strange why the BBC gets so exercised about this number, but remains happy to broadcast misogynist rap music — and Stormzy abusing the Prime Minister at Glastonbury with a string of profanities.

What next in the seasonal censorship stakes?

Chris Rea being cancelled for driving home for Christmas in a petrol car? Or perhaps Frosty The Snowman finally being put out of his nose-shaming misery.