Few artists since the Renaissance have sold their works to a more diverse bunch of celebrities than the late Tony White – let alone seen photos of clients wearing them. 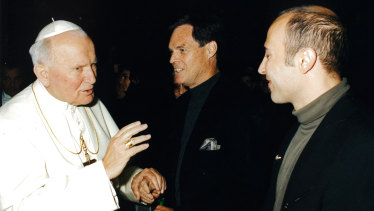 Tony White (centre) with one of his clients, Pope John Paul II.

At the home White shared with his architect partner, Alexander, there was a large viewing room where White entertained clients like Blanchett.

"Tony never had a shop front," explains Fiona Frith, fine jewellery specialist at Bonhams auctioneers. "He didn't see himself as a commercial jeweller. He made individual pieces of art."

On Sunday, more than 250 pieces from White's personal collection – including jewellery he made and artworks he collected – will go under the hammer in Woollahra, with several of the artist's favourite paintings having already sold privately. 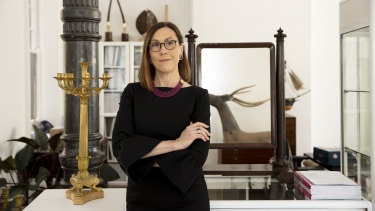 In Australia, White's collections were always unveiled in the most prestigious fine art galleries. In the US, he held boutique showings in New York, LA, Chicago and Dallas where his rich but classy clientele lived. But the more discerning local customers – such as Blanchett, Ita Buttrose, Gai Waterhouse and Jill Wran – were invited to the viewing room in his home, described as "part Vatican, part bordello". 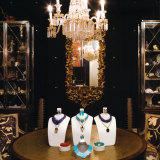 But, says Frith, the coup de grace was the "19th century gilt-framed, Rococo-style mirror" where potential customers could view themselves wearing White's jewellery.

"Tony was never 'just' a jeweller," Frith says. "He was well read, well versed and a highly intelligent person who drew inspiration from collecting interesting and unusual things. An artist, but also a charming salesman."

White often swapped a piece of his jewellery for a painting or a sculpture. Frith's favourite example is Blackman's The Dining Table, estimated to sell for around $200,000.

"Tony never spoke to me about what he made for the Pope," Frith says. "He knew a lot of important people, here in Australia and around the world. But he was always discreet."

And yet he kept a visitor's book, which guests to his viewing room could sign. Among them, Frith says, "are the Coburns, the Olsens and the Whiteleys". 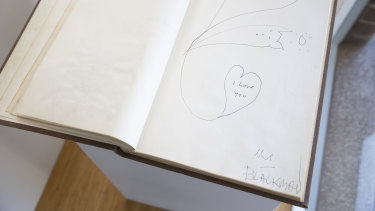 "Tony had a great eye," says Stuart Purves, director of Australian Galleries and long-time friend and exhibitor of White's work. "He was very stylish and only interested in quality. People love pre-owned things, knowing someone with confidence and taste valued them."

So what was the essence of White's jewellery genius?

"Tony was never into 'high jewellery'," Frith explains, referring to the show-off diamonds and pearls that can easily sell for $1 million to the super rich. Instead he used things he had discovered himself: particular shells, polished coral, tumbled tanzanite beads.

Frith's favourite? "In one piece, he's used polished coral, found the perfect pearl, and then added a dash of gold at the top. When you see it you recognise it as a bird on the branch of a tree."