But what started as a coincidental matching moment quickly escalated into something far more dramatic, as fans of both superstars took to social media to debate who wore the look better.

Adding fuel to the fire, 25-year-old Jenner even retweeted a fan who remarked, “kendall jenner pulling off this dress better than anyone else,” adding the comment, “had to take it home from set.”

The model was likely referring to her shoot with Vogue China in January, for which she donned the daisy-print frock.

While it’s possible Jenner was unaware of the battle brewing between her fans and Gomez’s, it didn’t take long for the 28-year-old pop star’s “Selenators” to weigh in on her tweet. 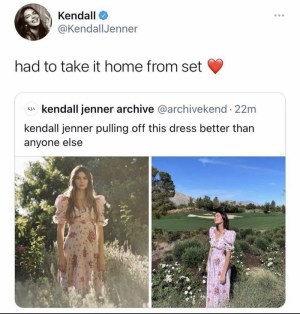 “Tragic how kendall felt the need to shade selena, sis is so insecure about being compared to the queen over merely an outfit that she had to desperate tell she looked better? lol that’s so petty!” one wrote.

Added another, “there was no reason to compare kendall and selena over a dress they both looked stunning in… kendall should’ve just sat there and held her chicken instead of quoting that tweet to begin with… she knew good and well what she was doing.”

Other Gomez diehards began flooding Jenner’s replies with photos and clips from the “De Una Vez” video; before long, the catwalker deleted her tweet altogether.

The “Bad Liar” hitmaker has yet to address the hullabaloo, but her official fan club cheekily retweeted photos of Jenner in the look, along with a link to stream Gomez’s new Spanish-language EP, “Revelación.”

The two stars have a history that extends beyond just fashion; Jenner was once romantically linked to Gomez’s famous ex, Justin Bieber, and is now close pals with the “Sorry” singer’s wife, Hailey Baldwin.