Home » Lifestyle » Kourtney Kardashian & Travis Barker: The Truth About Whether They Secretly Got Married In Vegas

Kourtney Kardashian and Travis Barker fueled rumors that they got married in Las Vegas — and now a source EXCLUSIVELY reveals to HollywoodLife if the couple did indeed tie the knot.

Did Kourtney Kardashian, 42, and Travis Barker, 45, say “I do” in Las Vegas? It sure seemed like it after Kourtney, her go-to hairstylist, Glen Coco, and Travis’ daughter, Alabama Barker, 15, all shared photos from the couple’s romantic trip to Sin City last weekend and alluded to a marriage taking place. However, a KarJenner source EXCLUSIVELY tells HollywoodLife that while they’re still madly in love, Kourtney and Travis did not get married — yet. “Kourtney and Travis didn’t get married in Las Vegas and if they had, it wouldn’t have been announced through someone in her glam squad,” the source said. HL reached out to the couple’s reps for comment, but has not heard back.

Fans were convinced Kourtney and Travis got married from the three-punch social media posts. First, the POOSH founder shared a series of sweet PDA photos of the couple on July 12 and said, “What happens in Vegas.” Glen then added to the marriage speculation when he shared the same images of the happy couple and captioned them with the following: “…NOWWW I understand why ppl tie the knot in Vegas. There’s nothing like love AND a good time.” And to cap it all off, Alabama shared the hand-holding pic of her dad and Kourt on her Instagram Story and said, “So happy for you guys.”

Although Kourtney and Travis didn’t tie the knot, marriage may not be too far off in their future. “Kourtney never wanted to get married in the past when she was with Scott [Disick] because she always had hang-ups after her parents’ divorce. But she’s at an age now where she’s ready to take that next step and it just feels right,” the KarJenner source said. They added that the Keeping Up with the Kardashians stars and the Blink-182 drummer are “head over heels for each other and enjoying the relationship as it naturally unfolds.” 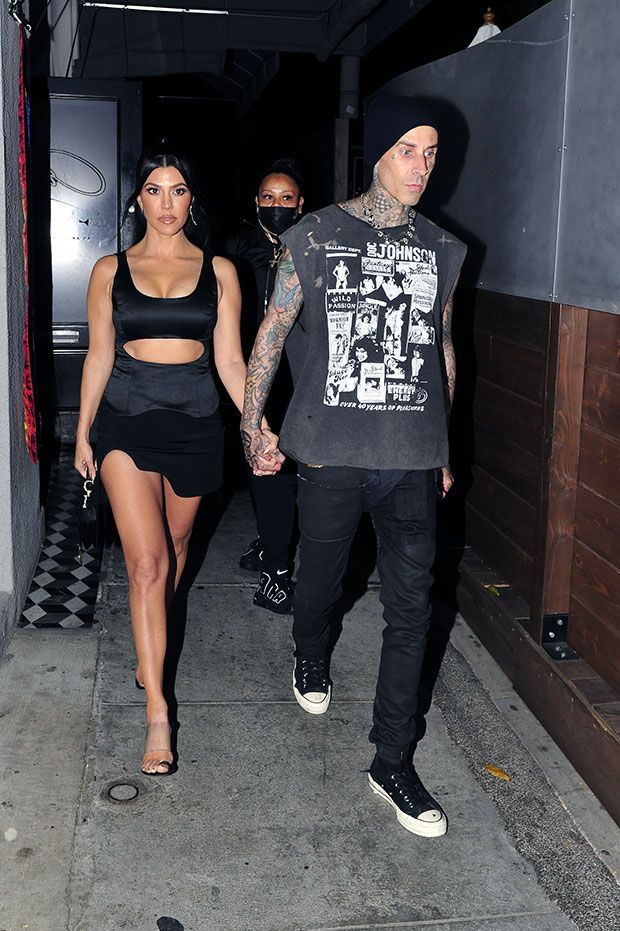 Meanwhile, a source close to the couple tells HollywoodLife that while an engagement and marriage “are on the table” for Kourt and Travis, they’re more focused on their children right now. “They are also both parents and they want to make sure it is right for their kids,” said the source. As fans know, Kourtney has three little ones — Mason, 11, Penelope, 9, and Reign Disick, 6 — from her former relationship with Scott, 38. Travis, meanwhile, shares Alabama and son Landon, 17, with ex-wife Shanna Moakler.

Kourtney and Travis have been packing on nonstop PDA since they started dating in Jan. 2021. And as it seems, the mom of three is all in for the affection her musician boyfriend shows her, according to a Kourtney source. “She loves the PDA, and the fun they’re having with each other,” the source said. “She also loves all of the snuggling and attention she’s getting from Travis.”