Kyle Richards wants to Lisa Vanderpump to “move on” from their feud but can’t seem to do so herself.

The “Real Housewives of Beverly Hills” veteran, 52, slammed her former co-star on social media again, claiming the “Overserved” host, 60, is guilty of “gaslighting.”

Richards’ latest dig came in response to a recent interview that Vanderpump did with “Entertainment Tonight” host Brice Sander, in which the restauranteur defended scribbling all over her former castmates’ faces while autographing a photo for a fan.

“Again, Kyle makes it about her and says it was a kid’s picture,” Vanderpump said. “It was a paparazzi guy — you know when they have the 10x12s? He said, ‘Will you sign this for me?’”

She added, “Oh, I thought, ‘Well, I’ll also draw a little mustache on Kyle’ … and he was loving it and so excited, but Kyle started saying it was a kid’s photograph. It’s the paparazzi guy that stands outside.”

The former “RHOBH” star insisted that it was “another attempt” by Richards to “try to malign” her.

Richards replied to the interview in the comments section of Sander’s post on Thursday, writing, “I NEVER said it was a ‘kid’s photo’ talk about gaslighting. It WAS a fan, NOT a paparazzi. Now for the love of God, let it go Lisa.”

The current “Housewife” doubled down on her Instagram Stories, adding the song “Let It Go” from Disney’s “Frozen” to a screenshot of an article about Vanderpump demanding an apology. 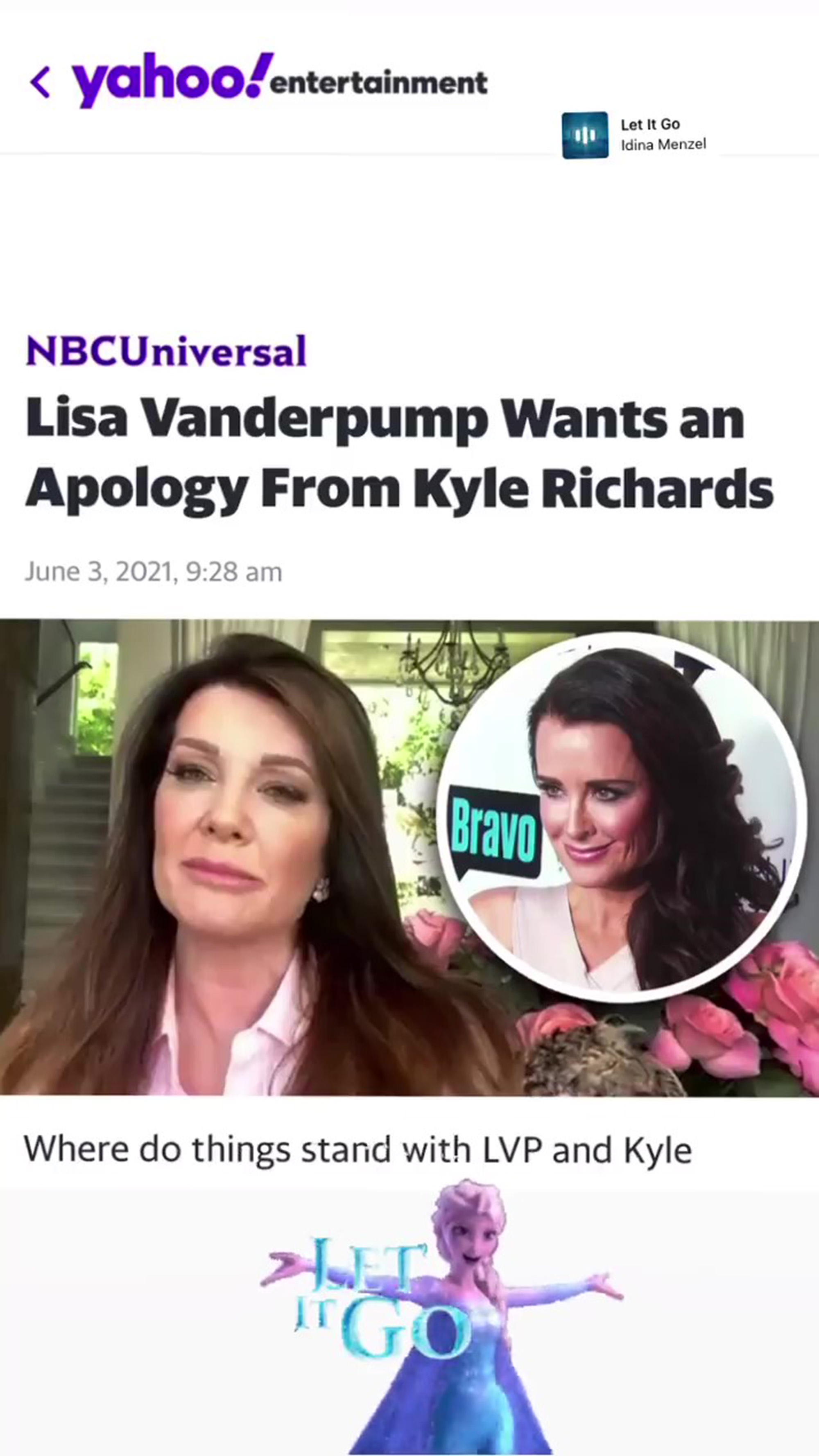 However, some Bravo fans feel that Richards is not helping the feud die down by repeatedly responding to Vanderpump’s comments to the press.

One person tweeted, “If kyle would just ignore it and stop responding and giving it life it would just fade away..she rakes every opportunity to pick the scab.”

Another chimed in, “They BOTH , are keeping this going by responding. if one of them would just simply say NO COMMENT everything they are ask it would be over. they both wanna be right.”

Earlier on Thursday, Richards commented, “It’s time to move on” with a sleepy-face emoji in response to an E! “Daily Pop” interview clip of Vanderpump talking about another one of their latest tiffs.

In a recent incident, Vanderpump playfully left Richards and a Bravo producer with her dinner bill, but the pair declined to pay. Vanderpump ended up picking up the tab.

The SUR owner said Richards’ behavior was unusual since the “Halloween” star “normally” goes up to her at events, but she added, “Unless it’s going to start with an apology, where do you go?”

A rep for Vanderpump did not immediately return Page Six’s request for comment.