Labor deputy leader Richard Marles has promised small business owners they will keep the financial help they received during the pandemic despite Coalition claims of a bid to force people to repay JobKeeper cash.

Mr Marles made the pledge to a business forum after weeks of political combat over the $89 billion wage subsidy scheme and questions over how much of the money went to companies that did not qualify for cash or did not need the aid. 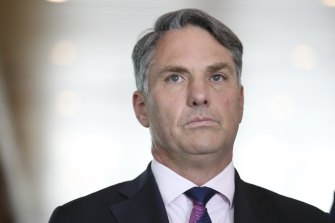 Deputy Labor leader Richard Marles said “Labor will not require any business to repay a single cent of JobKeeper”.Credit:Alex Ellinghausen

With Labor warning that $13 billion went to companies that increased their turnover, the Coalition has raised the prospect of a Labor government trying to force companies to repay cash with a “clawback” mechanism that was not in the original scheme.

“Instead of looking for ways to help small businesses survive, the government has been playing politics, wasting its time running scare campaigns,” Mr Marles said on Tuesday.

“The latest of these has been to peddle the untruth that Labor intends to make businesses including small businesses repay JobKeeper. This is a complete lie.

“Let me be unequivocally clear: Labor will not require any business to repay a single cent of JobKeeper.

“Let me repeat that. Labor will not require any business to repay a single cent of JobKeeper.”

The comments, made to the Western Sydney Leadership Dialogue, respond to challenges from Liberals about Labor rhetoric that has suggested some companies did not deserve support and should return some of the cash they received.

Labor assistant treasury spokesman Andrew Leigh sparked the debate after he asked the Parliamentary Budget Office to look into the number of JobKeeper recipients that increased their turnover, even though the eligibility criteria required companies to forecast or experience a fall in turnover.

When Labor treasury spokesman Jim Chalmers claimed this week the government should not “spray around billions of dollars in wasted taxpayer money” with JobKeeper, NSW Liberal Senator Andrew Bragg questioned whether this meant forcing companies to repay money.

Labor supports a motion in the Senate to require the Australian Taxation Office to produce a list of about 20,000 larger companies and the JobKeeper sums they received, but the move does not seek confidential tax information or require money to be repaid.

Led by South Australian independent Rex Patrick, the Senate move is also backed by the Greens and other crossbenchers and is due to be debated after Parliament resumes on October 18.

Treasurer Josh Frydenberg has criticised that move on the grounds it would be unfair to companies that applied for the taxpayer help in good faith when the rules did not require their names and financial affairs to be made public.

Mr Marles told the forum Labor backed the aspiration of small business and backed the overall JobKeeper scheme, given the opposition had called for a wage subsidy in the weeks before Prime Minister Scott Morrison and Treasurer Josh Frydenberg unveiled the scheme in March last year.

“JobKeeper was fundamental to people staying connected to their workplaces. It provided the certainty throughout 2020 that was needed to keep small businesses across the country in business,” he said.

But he said the government had failed to put in place a consistent approach to reimbursing workers who lost jobs and companies that were forced to shut down in the lockdowns this year, with a series of announcements on the COVID-19 Disaster Payment instead.

“The result throughout this year has been policy on the run when it comes to providing business support: piecemeal reactive measures with no national plan,” he said.