Scott Morrison and Anthony Albanese have made last-ditch visits to seats they’re trying to snatch off each other as they try to win the race to 74 lower house seats – two short of the required majority.

A majority government can be formed with 76 seats in the 151-seat lower house, but both leaders expect to rely on the support of at least two crossbenchers each who could get them to the required number. 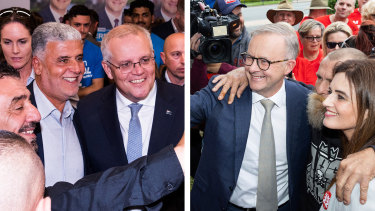 Scott Morrison and Anthony Albanese campaigning on Thursday, two days ahead of the election.Credit:James Brickwood/Alex Ellinghausen

Morrison started the day in the Tasmanian seat of Braddon, headed immediately to Lyons, flew to Sydney to campaign in the Labor-held marginal of Werriwa before boarding an afternoon flight to Perth ahead of a Friday push to shore up the Liberal-held seats of Swan and Pearce.

Albanese visited Bennelong in Sydney before heading to the Brisbane-based seats of Longman, Petrie, Dickson and Ryan.

One Liberal cabinet minister, who asked not to be named so he could discuss the Coalition’s election prospects, claimed momentum had switched back to the Coalition in the final week, following the super-for-housing announcement on Sunday.

But he conceded it would be difficult for either side to reach 76 seats and form a majority government, based on the party’s nightly tracking poll.

A source in Liberal HQ, who also asked not to be named so they could discuss internal party polling, said Labor-held Gilmore, Corangamite and Lingiari were up for grabs, but Liberal-held Swan, Boothby and Reid would be difficult to hang on to.

According to this source, Liberal-held Chisholm and Bennelong were line-ball, Parramatta remained a possible Liberal gain and Brisbane was shaping as a Liberal-Greens contest.

“The magic number is 74 [seats] because both sides can count on two crossbenchers,” the source said.

The Coalition is confident of support from crossbenchers Rebekha Sharkie and Bob Katter, who supported Tony Abbott in 2010, while Labor will likely secure support from Adam Bandt and Andrew Wilkie.

Morrison spent a night in Tasmania but decided to skip the ultra-marginal Liberal seat of Bass, which is held by Bridget Archer on a margin of 0.4 per cent. He had already visited the seat three times during the campaign but instead of dropping in for a final week appearance he stopped in neighbouring Liberal-held Braddon and then Labor-held Lyons.

Archer’s advertisements have run in the Launceston Examiner under the tagline “Keep Bridget in Bass” – a similar message to Treasurer Josh Frydenberg’s in Kooyong – and have been shorn of Liberal Party branding.

Labor strategists hope to win one or both of the two Liberal seats, which frequently change hands, but Liberal strategists believe they could snatch Lyons.

The Prime Minister met few, if any, undecided voters on his two stops in Lyons.

Lyons candidate Suzy Bower joined Morrison for visits to the Whitmore Tennis Club and then to a local business, Island Block and Paving, which employs about 50 people and ships about 30 per cent of its pavers and bricks to the mainland under the government-funded freight equalisation scheme.

The small gathering of about 25 people at the tennis club was a safe one for Morrison, with many rusted-on Liberal supporters at the event. Sarah Hirst, a member of the tennis club, said it was the first time a Prime Minister had visited Whitmore.

“This is a conservative community, they really want people who are happy to stand up for the local community,” she said.

Albanese went to Strathpine to greet volunteers for Dickson candidate Ali France, shaking hands and posing for photos. One man, Paul Hayes, asked the Labor leader to sign a pencil sketch of himself. Hayes said he took up drawing as a hobby at home.

“I got to sleep in my own bed last night, which was great,” Albanese said when one of the volunteers asked how the campaign was going.

Cut through the noise of the federal election campaign with news, views and expert analysis from Jacqueline Maley. Sign up to our Australia Votes 2022 newsletter here.