Being a landlord isn’t easy – especially when you have to deal with death threats or finding drugs in your house.

Paul Ainsworth-Lord, a local lettings agent from Darwen, Lancashire, uncovers a cannabis farm in the spare room of a property he’s been managing on behalf of a landlord in this week’s Nightmare tenants, Slum Landlords on Channel 5.

Also in Fleetwood, desperate landlord Jack Wood has to call in bailiffs to get rid of his tenant Kirk.

He has failed to pay rent for the last 14 months and has become aggressive – including threatening to kill him. 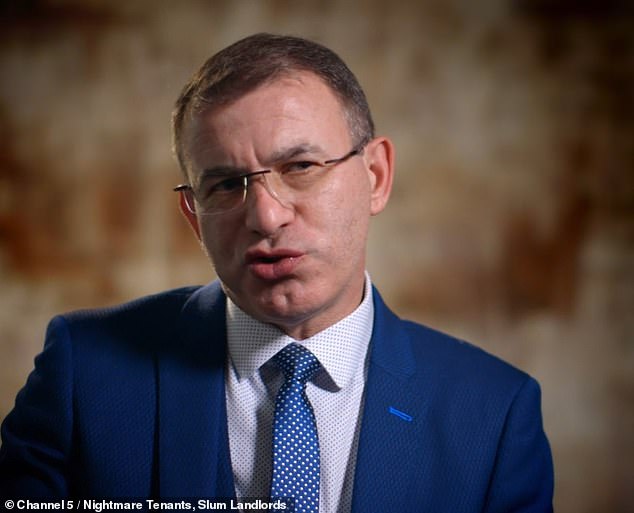 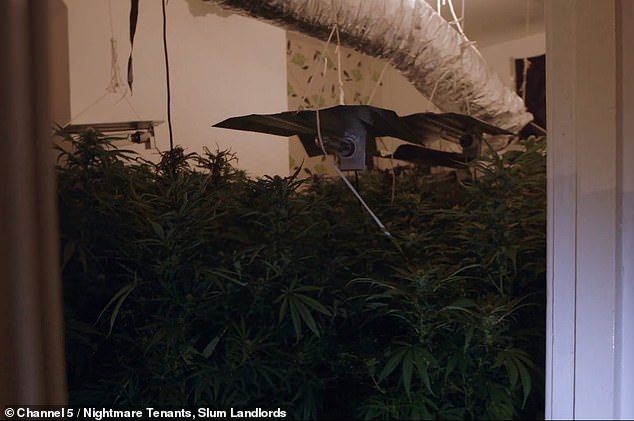 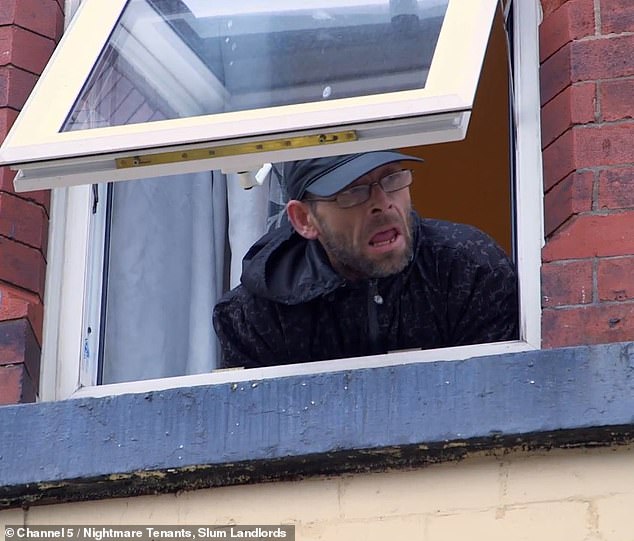 Initially, Paul is pursuing tenant Dermot, who has not paid his rent for four months, amounting to nearly £3,000. But when he enters the two-bed terrace, the lettings agent immediately sees something isn’t quite right.

The house is littered with paraphernalia, objects used to take hard drugs. In the deserted house, Paul finds syringes, blood stains on a duvet and mattress is one of the rooms, several sheets of foil and a cannabis grinder. He suspects that the house is run by drug addicts.

But the big reveal happens when Paul goes to check one of the house’s spare rooms. As he pushes the door open, he stumbles upon rows and rows of cannabis plants.

‘I’ve never caught [tenants] red-handed like this in all the years I’ve been doing it,’ he says.

‘How stupid can you be,’ he asks, as he looks onto the cannabis plants in the room. ‘You don’t pay your rent, your agent’s chasing you, “there’ll never come around here so we’ll temper the doors so they can’t come in, we’ll change the locks for good measure,” they think we were born yesterday?’ He asks rhetorically.

We learn during the episode that the tenants have been renting the place for the past 10 months. 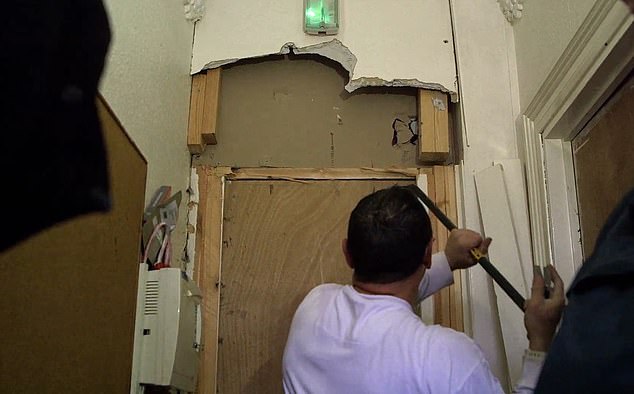 Jacks’s tenant barricades himself in the house to resist eviction and refuses to cooperate with the bailiffs, who have to completely dismantle the property’s door as Jack looks on 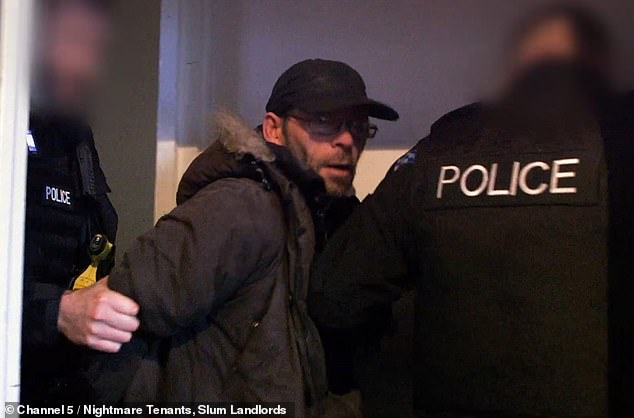 The room is filled with cannabis from floor to ceiling, and the floor has been covered in soil. Paul’s first reflex is to notify the police of his findings.

Later in the episode, Paul informs the landlord of the property, Ian of what he’s found and shows him around the room,who’s been cleared by the police for evidence.

‘He’s a nice guy, proper nice guys,’ Paul says of Ian, ‘and this is part of his retirement, part of his bread and butter, fish and chip, it’s his pension money.’

‘Shocked’ Ian can’t believe what he sees: ‘Heroin? What they had heroin here,’ he asks when Paul shows him the picture of the paraphernalia he’s found in the living-room of the property. 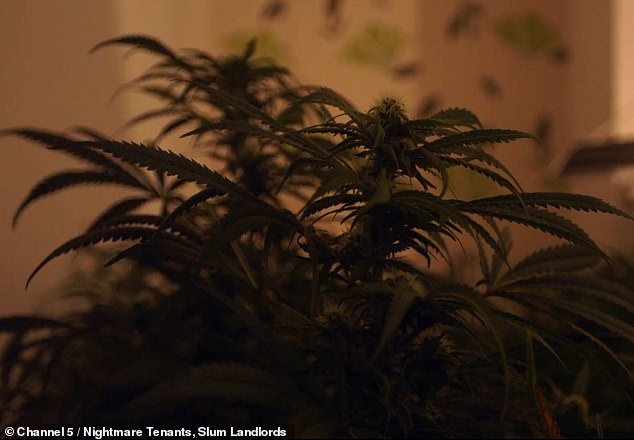 There are several crops of cannabis in the room, which is covered in soil and heated electrically (pictured) 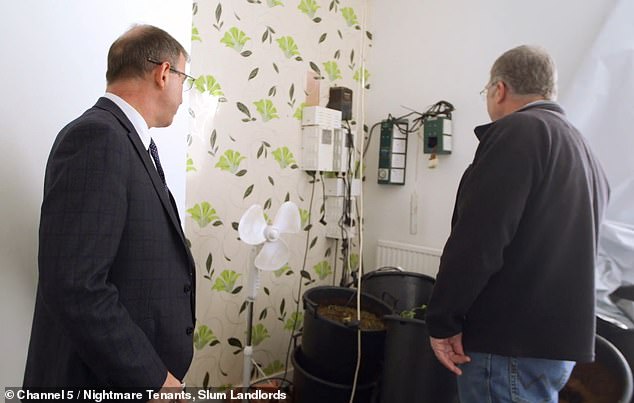 ‘I wonder how many crops they’ve had, they might have been doing it for as long as he’s been here,’ he says, referring to Dermot, his tenant.

Dermot has not been located since Paul reported the illicit crops to the police, and a warrant, we’re told, is about to put for his arrest.

When Dermot finally resurfaces, Paul pays him a visit. The tenant claims the drugs were not his, but belong to the person who was subletting his room.

However, the letting agent states firmly that the house was rented by the agency to Dermot and no one else, and that it’s him who will be expected to pay the four months or rent that are due and will have to clean the house.

At the end of the episode it is revealed that landlord Ian wants tenant Dermot out of his property, and it seems the two parties have found an agreement, but not without new issues. 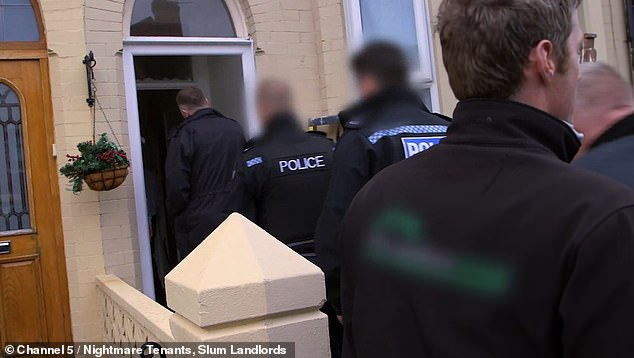 Meanwhile Jack is a retired shop keeper, and because of his bad tenant’s antics, his almost £5,000 in debt.

‘Not getting the rent for over a year has made a big dent in my income,’ Jack explains.

Two previous attempts to evict Kirk have failed, and the tenant became very aggressive on the last attempt, threatening Jack’s life, which left him ‘apprehensive’ to try for another eviction.

When the landlord shows up at the property with several locksmiths, a sheriff, dog handlers and a specialised lawyer, the situation tenses up quickly.

His tenant barricades himself in the house to resist eviction and refuses to cooperate with the bailiffs, who have to completely dismantle the property’s door as Jack looks on. 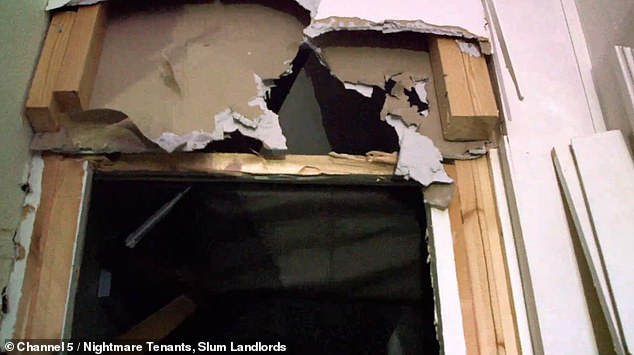 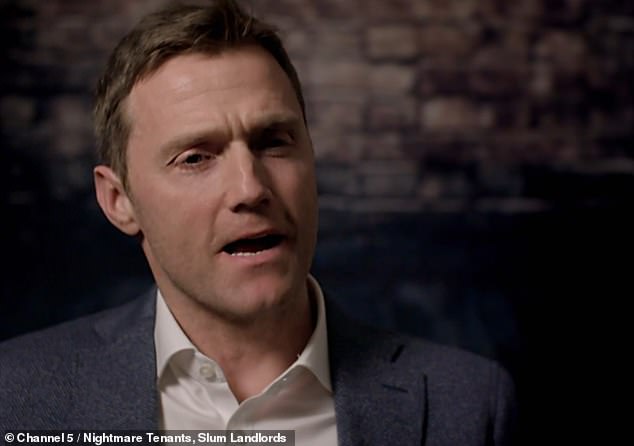 Lawyer Chris (pictured) says Jack’s tenant is growing increasingly threatening, as he claims he has a machete and police believe he may be armed

The man, who says he doesn’t care if his dog, a rottweiler bites men and gets put down, threatens the team of three bailiffs, the lawyer Chris Sharpe and landlord Jack several times.

‘I don’t give a f*** if there’s a sheriff or not,’ Kirk says, leaning from the property’s window.

‘I ain’t got nothing,’ he adds as the team moves in to take the frame out of the building’s second door in order to enter the property and get Kirk out. 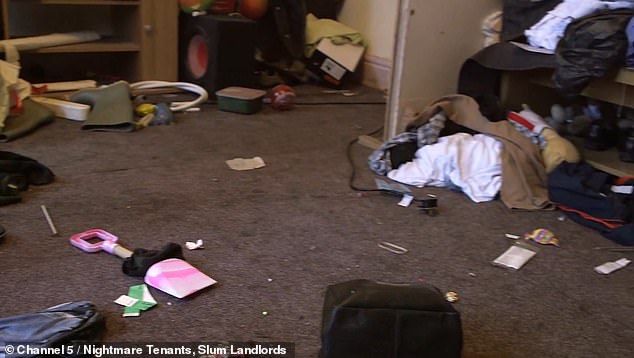 In the house, the police finds that the floor is covered with litter. The tenant has not paid rent for the past 14 months and has resisted two previous e 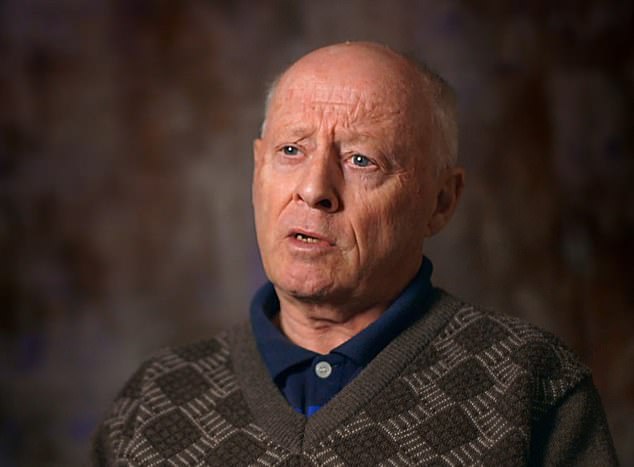 It then appears the tenant is throwing heavy objects down the staircase in order to barricade him further.

‘By the sounds of it, he’s put a wardrobe of something like that downstairs,’ one of the locksmiths says. ‘I can hear stuff coming down,’ he adds.

After refusing to leave the property peacefully, Kirk then threatens to put gas on the house’s stove, which would endanger everyone’s life, his included.

‘I’ve got a gas canister on the gas stove in the kitchen,’ he says from the window.

‘What do you call someone who loses it completely, like he did?’ Jack asks the camera. 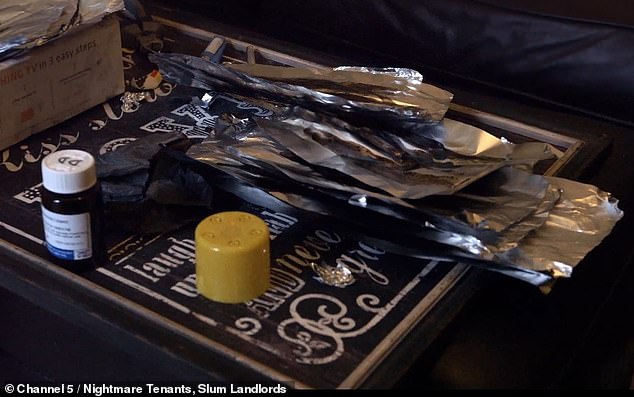 Pictured: Some of the paraphernalia found by Paul and the locksmith when he makes a forced entry in the building

‘It was crackers,’ the landlord adds.  When Kirk starts to throw more objects down the staircase to keep the bailiffs at bay, the team calls reinforcement and police arrives at the scene.

The forces eventually get in the building as Kirk continues to throw objects at Jack and Chris’ faces including a washing machine.

‘Whether he meant it or not, the level of threat he was posing was quite high,’ says lawyer Chris. 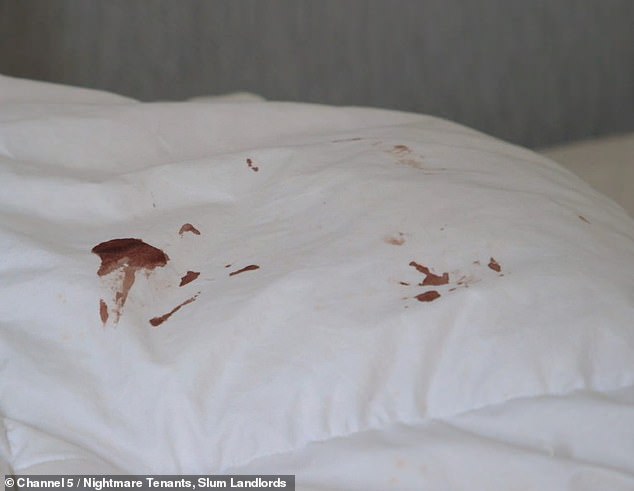 Eventually, the police moves in to arrest Kirk, who locks himself in the attic bedroom.

The police finds several weapons in Kirk’s flat, including a hatchet a pocket knife, ‘several machetes and a replica firearm,’ one of the bailiffs says.

‘What have I done, I haven’t done nothing,’ Kirk protests as police officers move in on him. Eventually he surrenders and is handcuff and led outside.

‘Very strange that you’d have to go through these lengths to actually get rid of somebody,’ Jack tells the camera.

Elsewhere in South London, things get heated when married landlord Mohammed and Monwara Dewan enlist the help of an eviction expert to claim some money they’re owed by their letting agent.

The couple are owed more than £5,000, however it appears that the agency has changed its name in order to avoid paying their debts.

And in Harrow, hair salon owner Masi has to deal with the misbehaving and littering tenants of a clueless landlord above her shop. The man has refused to deal with a leak coming from his property onto the salon for the past seven months.