Prime Minister Scott Morrison has told colleagues he wants to introduce a new religious freedom bill into Parliament within days in a sign of his personal commitment to the change despite warnings from Liberal MPs who believe it could weaken laws meant to guarantee equality.

Liberal MPs spoke up in a tense meeting of the Coalition party room on Tuesday to warn against any move to rush the Religious Discrimination Bill through Parliament when the changes have split church and gender equality advocates and most MPs are yet to see the details. 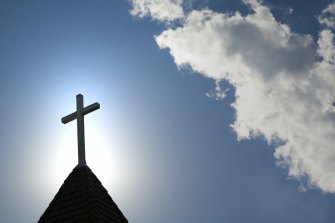 Some MPs have warned of the risk of a draft provision that gives religious schools the right to make personal faith a factor when hiring staff.Credit:AFR

Worried the Prime Minister will force Liberals and Nationals to support the bill on party lines, backbenchers urged a slower approach so a Senate inquiry could review changes that include safeguards for people who make statements of personal faith.

MPs also warned of the risk of a draft provision that gives religious schools the right to make personal faith a factor when hiring staff, sparking concerns from Equality Australia that this could allow principals to remove gay and lesbian teachers.

The government argues the Religious Discrimination Bill does not confer a right to dismiss staff on the grounds of their gender or sexuality but LGBTIQ groups do not accept the assurance when the draft bill has not been released for public scrutiny.

Members of the Coalition party room told this masthead that several members of the moderate wing of the Liberal Party had put a strong argument against rushing the bill.

Mr Morrison’s comments to the meeting made it clear he intended to introduce the bill and that this would happen this week before the changes were referred to a Senate inquiry, leading to a final decision on the bill at a later point.