Ryan Reynolds has done it again! The actor, who is known for his dry sense of humor, has created yet another LOL-worthy commercial for his Aviation Gin.

In the new spot, which debuted on Wednesday, June 5, Reynolds toys with the idea of what he would and wouldn’t do for his liquor brand, which he purchased in 2018. “How far would you go for your company?” the 42-year-old wonders in a voice-over. “It’s a question I ask myself everyday.” The Deadpool star then opens up about how he bought his company after “falling in love” with the gin itself.

“When Aviation recently suggested making a signature bottle, I committed to blowing every single bottle personally,” the voice-over continues as the Two Guys, a Girl and a Pizza Place alum is shown glassblowing.

Reynolds says he also engraved each bottle by hand because, as he wonders, “Can you ever really go too far for your company?”

The camera then pulls back to reveal Andy King, famous for his involvement in the disastrous Fyre Festival, watching this Aviation Gin spot in a bar. “He gets it,” King declares. “I’ll have an Aviation Gin.”

King, who helped plan the defunct music event, became famous after appearing in a Netflix documentary about the festival in which he claimed he was prepared to offer a customs official in the Bahamas oral sex if said worker was willing to waive a $175,000 fee to free up thousands of bottles of Evian water.

The commercial ends with Reynolds declaring: “Aviation, how far would you go?”

In honor of the new ad and launch of the limited-edition bottle, Reynolds has also updated his out-of-office message. “I am currently out of the office on summer vacation. Rest assured, though, I never stop working for Aviation,” the message states. “This summer, I have committed to qualifying for the newly created FAA Promotional Pilot’s License. I will be logging 200 hours of flight time dragging my own face across the skies near you.” 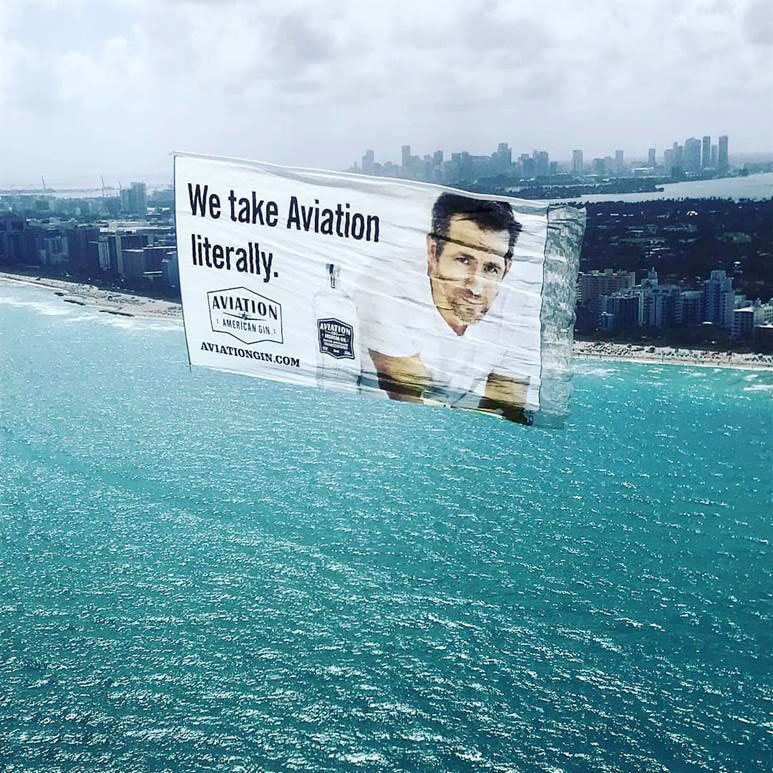 Fittingly, the message also includes a photograph of an Aviation Gin banner (with Reynolds’ mug) flying high in the sky. “If you see it, please raise your Aviation and tonic towards the sky,” he writes. “Actually, don’t. Can’t get distracted. Flying …”