Home » Lifestyle » ‘Magic happened in the room’: Here Out West is a rare contemporary take on western Sydney

Like all the other writers who gathered in a room three years ago, Arka Das had no clue that their brainstorming session would result in a film. He thought it might be, at best, a small-scale online series. 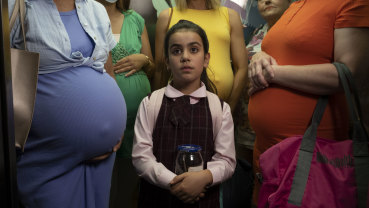 “Day one, we didn’t know what we were in for,” he says. “Now here we are opening the Sydney Film Festival.”

Das has written one of the interweaving chapters – and shines playing Robi, whose knowledge of Bengali helps a desperate woman – in the anthology film Here Out West.

Set in fictional Sunnyholt and shot in Blacktown, it’s a fresh take on contemporary western Sydney.

Eight new writers from different cultural backgrounds from the area – Bangladeshi, Chilean, Chinese-Burmese, Kurdish, Indian, Lebanese, Filipino and Vietnamese – have teamed up with five female directors for a story told in nine languages.

What sounds like a roll-the-dice creative experiment has exceeded all reasonable expectations with selection for such a prestigious festival slot.

Here Out West tells an engaging story about what happens over 24 hours after a grandmother (Genevieve Lemon) steals a baby from a hospital. Other characters include a Chilean security guard (Christian Ravello), who writes poetry to get through his long shifts; a Kurdish musician (De Lovan Zandy), who has been offered a new job; a Filipino nurse (Christine Milo), who takes on an extra hospital shift; and a mother (Gabrielle Chan) and daughter (Jing-Xuan Chan) facing the closing night of the family’s restaurant. 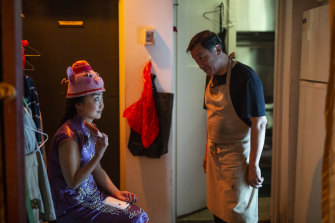 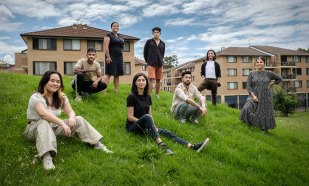 Bangladesh-born and Sydney-raised Das, an actor who has been in Lion, Top of the Lake and Mulan, was looking to move into screenwriting when he heard of the call-out for emerging writers.

“I applied on the last day, a very cliche deadline kind of thing,” he says. “I thought if it made a web series or something, that would be great.

“But magic happened in the room. Eight of us had these loosely connected ideas of western Sydney and about place and family and belonging and how we wanted this new generation of migrant stories to be told and how we wanted to change the Australian cinema landscape because we felt it was always showing the same thing. It was always tales about refugees or downtrodden immigrants.”

He credits script producer Blake Ayshford (Fighting Season) with helping the writers to develop their stories and weave them into a single film. He considers it an important boost for emerging talent in the economic, social and cultural powerhouse that is the western suburbs. 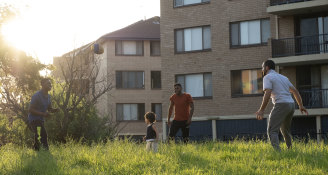 “We wanted this new generation of migrant stories to be told”: Here Out West.Credit:Mind Blowing World

“You’ve got so much talent, so much artistic ability,” he says. “But what we’ve never had is the infrastructure. We’ve never had the pathways to get into the film industry or for people to start showing their work on a mainstream platform.”

Here Out West grew out of an initiative to explore a new model for film-making and feed a demand for more diverse stories.

”They’re all incredibly personal stories,” she says. “Not ‘head down, work hard, be thankful you got to Australia’ but this new generation who wants to be seen; they want to be heard, they want to have a voice.“

For writer and actor Nisrine Amine, the festival screening is ideal timing. 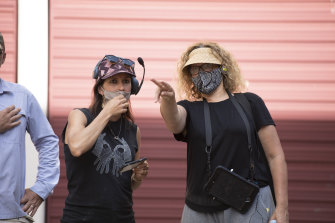 Director Leah Purcell (right) and cinematographer Tania Lambert line up a shot for Here Out West in Blacktown. Credit:Wolter Peeters

“It’s going to be an accidental statement in a way to say ‘here we are, we’ve come out of lockdown, we matter and our voices can be heard’,” she says. “It’s just a beautiful way to commemorate the end of lockdown, especially for western Sydney.”

‘It’s going to be an accidental statement in a way to say “here we are, we’ve come out of lockdown, we matter and our voices can be heard”.’

Like Das and Amine, the other writers are all newcomers to film: Bina Bhattacharya, Matias Bolla, Claire Cao, Dee Dogan, Vonne Patiag and Tien Tran.

A feature of the project was that all of them were made associate producers.

“That meant we could be involved in creative decisions right from the beginning through to marketing,” Das says. “That changed the game. The producers would come to us and ask what we thought of certain creative decisions, whether they were authentic to the story or whether it was becoming a little commercialised.”

Two established directors, Leah Purcell (The Drover’s Wife: The Legend of Molly Johnson) and Ana Kokkinos (The Hunting) teamed up with the less well-known Fadia Abboud, Julie Kalceff and Lucy Gaffy to shoot the film.

Abboud, the daughter of Lebanese immigrants and a former co-director of the Arab Film Festival, is thrilled that her first feature film is on opening night. 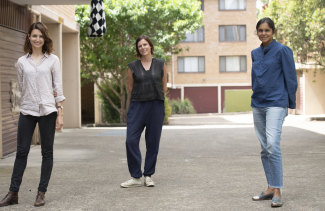 Producers (from left) Bree-Anne Sykes, Annabel Davis and Sheila Jayadev on the set of Here Out West in Blacktown.Credit:Wolter Peeters

“Good on them for putting it up there as a story that you need to see and is worthy of your attention,” she says. “We were all wondering exactly how it was going to work, but it’s paid off.”

Abboud says the directors were happy to let each story be told in its own way rather than make all the chapters feel the same – reflecting the eclectic character of western Sydney.

“I’m a Parramatta born and bred girl and I loved the idea of this project when they told me about it,” she says.

Abboud also admired how the producers approached the project. 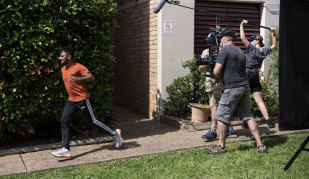 Arka Das, who acts in Here Out West and is one of the eight writers, runs from a unit block during filming.Credit:Wolter Peeters

“They adopted a cultural development process, which is the idea of centring the writer and the culture at the heart of the story and keeping the writer at every step in the process,” she says. “They’re giving up a very personal story, and it’s about a culture and a community that you don’t see very often on screen. So we had to get everything right and we had to honour that story.”

As the daughter of Lebanese immigrants, Abboud identified with the two chapters she directed – The Musician, about two Kurdish refugees who plan to set up a music school, and Brother Tom, about two Vietnamese-Australian brothers. 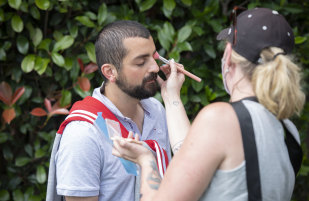 Rahel Romahn has make-up applied for a scene in Here Out West,/i>. Credit:Wolter Peeters

“I understand where these stories come from,” she says. “I understand the struggle that you have with your parents when it feels like they’ve given up everything to come here and give you a better life.”

ALSO SCREENING AT THE FESTIVAL …

THE POWER OF THE DOG 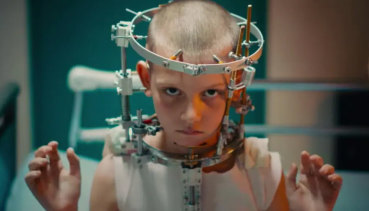 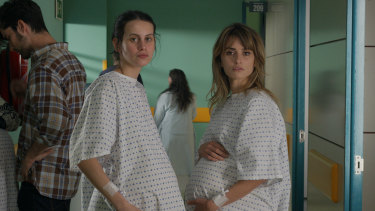