Laws meant to stop rogue medicos from performing complex operations while calling themselves “cosmetic surgeons” have been languishing for three years, as doctors argue over who can use the title ‘surgeon’ and work in the billion-dollar industry.

Federal Health Minister Greg Hunt has asked state health ministers to make the new laws a priority, after a joint investigation by The Sydney Morning Herald, The Age and the ABC exposed the dark underbelly of the loosely regulated sector. 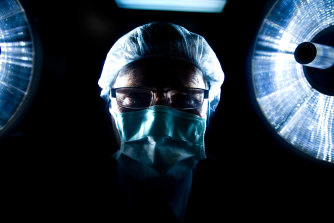 Medicos who call themselves cosmetic surgeons do not currently have to have surgical training.Credit:Nic Walker

Health ministers have been consulting on reforms to regulations governing health practitioners in Australia since July 2018. In November 2019, they agreed to restrict the title “surgeon”, but the laws have not yet been changed. That work is being led by Victorian Health Minister Martin Foley.

A spokesman for Mr Hunt said the minister received a letter on Tuesday from the Australasian College of Cosmetic Surgery and Medicine calling for better regulation of cosmetic surgeons. The college wants cosmetic surgery to be recognised and protected as its own speciality.

“Minister Hunt has referred this letter to the Victorian Health Minister in his capacity as the lead on the review, requesting prioritisation and further review of this matter,” the spokesman said.

AHPRA said it does not currently have the power to prevent people from using the title because it is not a protected title under national law.

“That is a matter for health ministers, who have agreed to consult on changing the national law to protect the title ‘surgeon’, including ‘cosmetic surgeon’ and we welcome that consultation,” the regulator said in a statement.

Dr Robert Sheen, a specialist plastic surgeon and president of the Australasian Society of Aesthetic Plastic Surgeons, said short of protecting the title of cosmetic surgeon, practitioners should be forced to tell patients what is their exact medical registration.

“If the cosmetic surgeon was forced to disclose, for example, that they have general registration with AHPRA, not specialist registration … I think most patients would elect to go elsewhere,” he said.

“Just make them fess up about what they really are.”

Senator Griff, a crossbench senator who was behind a successful push for the IVF industry to publish its success rates, said he was concerned by the lack of regulation of cosmetic surgery.

“The public consider that anyone with the title of surgeon meets exceptionally high standards,” he said.

“While there is a grave and urgent need for much better consumer information, this amounts to regulatory fail of some significant scale,” Ms Wells said.

Specialist surgeons in all other fields have to compete for places in training programs from one of the medical colleges, including the Royal Australian College of Surgeons. Those training programs are ticked off by the Australian Medical Council, and the council requires all registered specialists to periodically update their training and have their accreditation reassessed.

Dr Sheen said many specialists including ophthalmologists and ear nose and throat surgeons undergo training for and perform cosmetic surgery, while the majority of practitioners who call themselves cosmetic surgeons have not been through that process.

Surveys conducted by the Australasian Society of Aesthetic Plastic Surgeons show the vast majority of patients believe people who call themselves cosmetic surgeons are expert surgeons and don’t realise that many have not had specialist surgical training, he added.

“I would posit that is highly deceptive,” Dr Sheen said. “We’re not telling these guys to stop operating. We’re saying let’s make them tell the truth. Let’s do things with our patients in a climate of full and open disclosure. So if you have general registration, don’t pretend you’re a specialist.”

“Australians seeking these treatments should not be misled by medical practitioners, non-specialist surgeons or those without appropriate surgical training,” he said.

A group of surgical colleges on Tuesday called for restrictions on which doctors can market themselves as cosmetic surgeons.

“We do not wish to see patients suffering harm, having incorrectly assumed that the person carrying out the procedure had completed accredited specialist surgical training,” they said.

But Dr Tansley said plastic surgeons were pushing for the title “cosmetic surgeon” to instead be banned.

Dr Sheen said it’s not about banning medicos from using the title altogether, but about making sure people who call themselves surgeons have had Australian Medical Council-recognised surgical training.

“A register already exists, which is called the upper register of surgical specialists, many of whom do cosmetic surgery,” he said.

“And if you guys want to come along and be on a register, and expect the community to view you that the same educational standard and competency standard of the existing specialists, then the expectation is you would go through an AMC accredited training program.”