Home » Lifestyle » Men, this is how you can make women feel safer now clocks have gone back 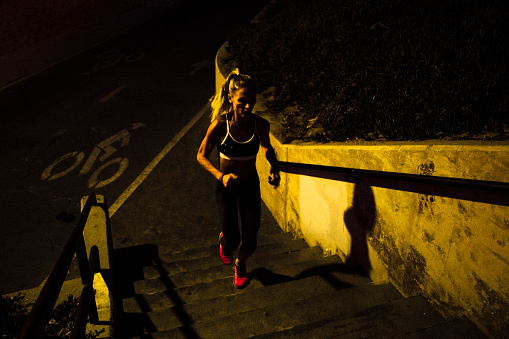 For many people, the annualchanging of the clocks comes with the short-term win of ‘gaining an hour’. Our mornings become lighter and, in return, comes a darker afternoon.

But, for many women, this is a not a good thing.

Sunset at around 4.30pm means that the ‘safety blanket’ of daylight shortens. Whether it’s after work, post school-run, or otherwise, the already-constrained window of time for a walk or run is squeezed even tighter.

This Girl Can is a nationwide campaign from Sport England to build women and girls’ confidence to be active.

Over the years, we’ve given numerous interviews advising women how to exercise safely after dark. But we’re not doing that anymore – because it is not our behaviour that needs to change.

Instead, we’re calling on men to consider how they can make women feel safer if they’re getting active in winter.

The current news cycle and the tragic killings of Sarah Everard and Sabina Nessa, will understandably be playing on the minds of women thinking about lacing up their trainers, to exercise outdoors, after dark.

It’s a widespread problem. A recent survey from Runners World found that 60% of women had been harassed while out running, with a further 25% reporting being regularly subjected to sexist comments or unwanted sexual advances – 6% said they had been harassed so badly while running, that they feared for their lives.

Women don’t need reminding when it comes to taking precautions – it is built into our brains from a young age: hold your keys, don’t wear heels, don’t wear a ponytail, don’t listen to music on your headphones, don’t be out alone. Yet, these measures bring no guarantees of safety, which is why we need men’s support when it comes to helping women feel safe.

Importantly, a caveat – it’s not all men, and we know that. The grey area, however, lies in not knowing how to tell innocent behaviour from not; the impossible task of telling good intentions from bad. When we meet unknown men in a public space, it’s impossible to tell whether or not they might be intending harm – what may seem friendly or non-threatening to an innocent man, could feel very different to us.

We need men to think about their own behaviour, and the behaviour of those in their friendship and family groups. Listen to what is being said in your social circles, and if something doesn’t feel right – whether its comments about how a woman is dressed and what this ‘suggests’ about her – call it out and explain why you’ve done so,

Can you imagine if someone shouted at you when you were running?

If not called out, these same men may think it’s acceptable to say these sort of things to women directly.

Even if you think it’s a compliment, don’t make comments to women who are out exercising. Women don’t want or need their running style, their clothing, or their bodies to be commented on. It’s at best irritating and often intimidating, especially when we’re on our own – we just want to be left alone to exercise in peace.

Can you imagine if someone shouted at you when you were running? It’s unsettling – especially when it’s dark outside.

I would also suggest that if you’re behind a woman while out running, cross the road to make her feel more comfortable and at ease. This is a small but selfless gesture, and the acknowledgement of personal space will go a long way in alleviating worries about being approached from behind.

By doing this, you have the ability to have such a positive impact on a woman while showing you are actively considering your own behaviour.

Whether it’s friends, partners, mothers, sisters, daughters, or otherwise – be supportive if the women in your life want to get active. And if exercising in daylight is what makes your partner, or friend, feel comfortable, try to support her to be able to do this. Have a chat to find out whether there’s anything you can do to help her to get out for a run or walk in the daylight and feel safe.

However big or small the above feel, they can make an untold difference in making the world a safer place for women. In making these changes, men are respecting that it is not just a woman’s responsibility to change the environment that makes us feel unsafe – but are considering how they can play a part in intervening in the first place.

We need men to be allies and try to step into the shoes of a woman, to imagine what it might feel like.

Our hope is that by calling on men to help women feel safe, this will contribute to building women’s confidence to get active on their own terms – even now the clocks have gone back. Too many women are missing out on the rewards of getting active and we need men to help us change this.

This Girl Can can’t and won’t go round in circles telling women how to think, dress or behave when it comes to getting active. Now we need men to step up for women too.

This Girl Can is a campaign by Sport England targeted at reducing the gender activity gap and inspiring women to be physically active.