Migrant children in two emergency housing sites in Texas managed by the U.S. government have limited access to case managers, phone calls to family, outside recreation and education, attorneys who inspected the facilities told CBS News.

However, the attorneys said the two makeshift shelters overseen by the Department of Health and Human Services (HHS) in Dallas and Midland, Texas, are safe and sanitary, and are much better settings for migrant children than overcrowded, jail-like Border Patrol facilities. The children at the HHS facilities expressed relief at being transferred out of Border Patrol custody, the attorneys said, citing interviews with more than a dozen migrant minors.

Unlike shelters and foster care programs overseen by HHS’ Office of Refugee Resettlement, emergency and influx housing facilities are not licensed by state authorities to house children and are not subject to the same standards of care. Attorneys said they worry about whether there are any written policies governing the care of children at the sites they toured.

In response to the historic number of unaccompanied migrant children crossing the southern border, the Biden administration is on track to open at least 10 of these emergency facilities by repurposing convention centers, camps for oil workers and military installations. The main objective is getting minors out of Border Patrol facilities, which were holding nearly 5,000 unaccompanied children as of Thursday morning. 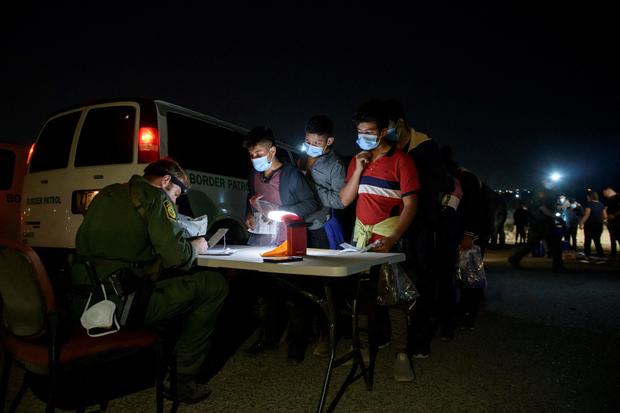 Carlos Holguín, one of the lead lawyers representing migrant children in the federal court case over the landmark Flores Agreement, visited the makeshift shelter in Midland on Tuesday. The facility, once a camp for oil workers, was housing about 500 Central American migrant boys in trailer-like structures, with 10 children in each unit, Holguín said.

Holguín, the general counsel at the Center for Human Rights and Constitutional Law, said his chief concern was that children reported not having access to case management services that facilitate their release to family members in the U.S.

“Case management is the most important issue because it minimizes the time children are there,” Holguín told CBS News. “We understand the federal government is contending with a difficult situation, but they need to minimize the amount of time the children spend in this type of facility.”

Melissa Adamson, another lawyer in the Flores case, visited the Midland facility with Holguín, as well another emergency site HHS set up at the Kay Bailey Hutchison Convention Center in Dallas, which was housing about 2,000 teenage boys. Adamson said the boys sleep on cots spaced out inside one large area of the convention center.

Adamson said there was some case management at the Dallas site but that it was limited.

“For every child that I spoke to, their first question, their first concern was related to how soon they were going to be released to their family. The kids didn’t have an understanding of the sponsor release process,” Adamson told CBS News, noting that all the teens she spoke to reported not yet speaking to a case manager.

Adamson also expressed concern about the boys in Dallas not having access to outside recreation. While staff had set up areas for the children to play soccer and basketball inside the convention center, Adamson said some of the boys told her they were not able to play as often as they would like.

Holguín noted that while children in Midland can go outside, organized recreation is “minimal,” saying the migrant boys reported being allowed to play soccer for 40 minutes on certain days. 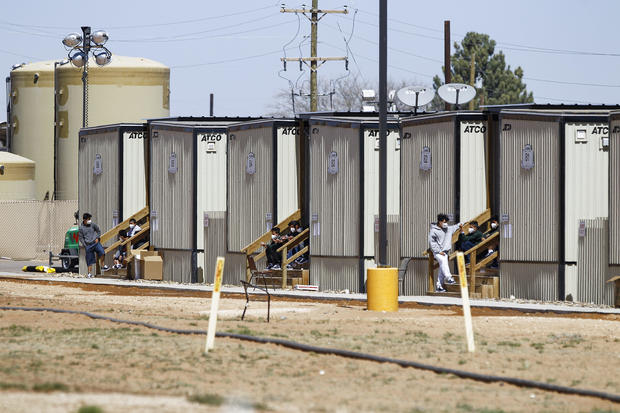 The children also reported not having classroom instruction, reading materials or any educational services apart from occasionally being allowed to do arts and crafts inside a white tent, Holguín added. In the Dallas convention center, Adamson said the children reported receiving about 20 minutes of classroom-like instructions Monday through Friday.

Holguín said most of the boys in the former camp for oil workers told him they had only been able to call their family once in as many as 15 days. He said facility staff could set up a centralized telephone room, instead of occasionally providing the children cell phones. Children in Dallas also reported limited access to phone calls with family, with some telling Adamson that they were allowed to make a call just once in a week.

“For the kids, that was distressing,” she added. “It was heart-breaking to see teenage boys whose main concern was, ‘I think my family is worrying about me. And I just want to let them know that I’m okay.'”

HHS did not dispute the attorneys’ findings. “We appreciate the Flores lawyers feedback and will continue to look for ways to improve services at every level of our care-provider network, both short-term and long-term,” the department said in a statement to CBS News.

HHS stressed that the primary objective of emergency facilities is to transfer children out of Border Patrol custody, calling it a “life-saving mission.”

“These sites do what they are intended to do, provide vital necessities while children move through our system with the end goal of unification with a parent, legal guardian, or family member,” the department added. “Case management, recreation, education, and other services are being provided to the extent possible in emergency settings.

Despite his concerns, Holguín said HHS had resolved groundwater issues that were reported last month at the Midland facility, and tapped bilingual employees to staff the site. He said children told him they enjoyed the food that was delivered to Midland, as well as the television sets in their units.

“In terms of the children’s reaction, they’re happy to be in Midland after having spent time at Donna,” Holguín told CBS News, referring to the Customs and Border Protection (CBP) tent holding facility in Donna, Texas.

Adamson echoed Holguín’s sentiment, saying COVID-19 precautions were being adhered to at the Dallas site and that children appreciated the care there, telling her that they could ask for extra blankets at night.

“The kids that I spoke with expressed that they were feeling safer; they felt better cared for; and that the staff was much nicer to them at the Dallas convention center than at Donna,” Adamson said. “Many of the kids had spent a really prolonged period of time at Donna and they were just really relieved to not be there.”

Earlier in the week, the Donna holding facility was at 1,624% of its pandemic-era capacity, with pods designed to hold 32 people under COVID-19 mitigation rules housing more than 600 unaccompanied teens. Children held there sleep on gym mats and have reported going days without seeing sunlight. 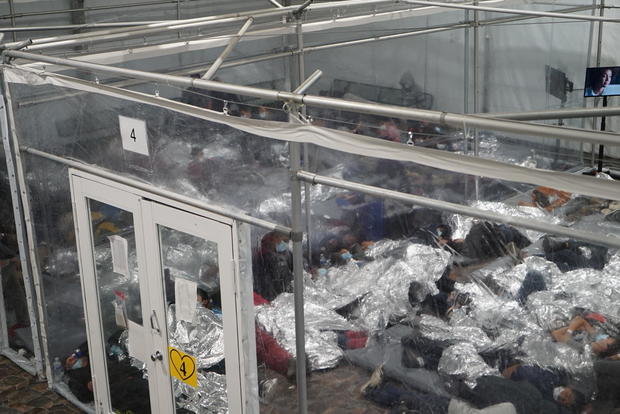 While official data has not yet been released, the number of unaccompanied children taken into U.S. custody along the southern border in March is expected to reach an all-time monthly high.

Holguín said the Central American boys he interviewed told him they journeyed north because of the pandemic, the devastation caused by back-to-back hurricanes and the suffocating poverty and violence that have plagued their homelands for decades.

Adamson said the interviews she conducted this week serve as a powerful reminder that the youths housed in these emergency facilities are children who have often endured traumatic experiences and who simply wish to be with family.

“There’s been so much media coverage about this being a ‘surge’ or a ‘crisis’ and that is just so dehumanizing to who these kids are,” Adamson said. “I just talked to really scared kids who were seeking protection. They were happy to be there, but they were anxious and they were fearful because they didn’t know what was going to happen to them.”