“My voice is how I represent myself. It’s how I express myself.”

Miley Cyrus says that her experimentation with her lower register is a part of her evolution as an artist.

Cyrus, 28, spoke with Metallica drummer Lars Ulrich for a feature story with Interview Magazine published on Wednesday October 20, revealing that since rediscovering herself as a rock artist, she’s occasionally received comments that criticize her deeper voice. 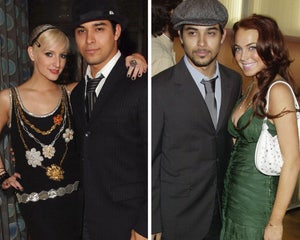 These Famous Musicians Admit These Songs Were Written About Other Celebs

“My whole life, whether in vocal training or just continuing to hone my craft,” she told Ulrich. “It’s always been about, ‘Why do you sound like a man? Where’s your f—ing falsetto, bitch? Why can’t you sing the high octave of ‘Party in the U.S.A.’ anymore?'”

“My voice is how I represent myself. It’s how I express myself,” she explained. “I’ve worked with so many people who tell me, ‘We’re going to have to bring in a singer to hit those high parts.’ You know, ‘falsetto’ is this Latin term for when a boy goes through puberty, but they still want him to sing in the choir. It means ‘false.'”

Instead of sounding how a woman “is supposed to sound like,” Cyrus said she’s grateful to have songs where she dips into that lower register.

Cyrus also shared how her new sound also allows her to experiment with songs she made during her “Hannah Montana” years and earlier albums.

“I’m about to turn 29. We’ve been through so much. When we’re out on the road, we talk about loneliness. It really can get that way. I have such a support system in them,” she said of her band. “I love having these authentic, real rock dudes in my band.”

“We even revisit songs that I wrote before I was able to make this huge sonic pivot in my career, before I discovered rock and roll,” she added. “Now, we cover my own songs. We take my original songs, and turn them on their head, and make them kick ass.”