The 21-year-old victim was only working there three months.

One woman was killed and eight more people were injured when shelving collapsed at a Brazilian supermarket on Friday night.

The terrifying incident occurred at a Mateus Atacarejo Mix store in São Luís, and was all captured on camera.

The incredible footage shows staff and customers at the checkout, interacting as normal, until a loud noise — unheard in the soundless recording — suddenly snaps everyone to attention.

Seconds later, people can be seen running for their lives from the aisles, as the towering shelves, at least 25ft high each, begin collapsing on top of each other like giant dominoes.

Customers and workers abandon the tills and flee for the exits as hundred of tons of wholesale products rain down on the shop floor.

Witness cellphones recording the immediate aftermath captured the chaos and panic, as they start pulling at the rubble to reach survivors. 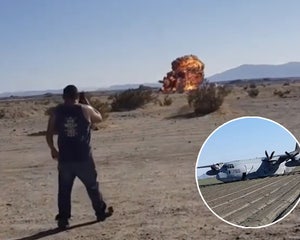 Incredibly, one man can be seen emerging from the tangle of metal, apparently unscathed, carrying a small child in his arms.

Unfortunately, not everyone was as lucky. One female worker, identified by local media as 21-year-old Elane de Oliveira Rodrigues, was crushed to death in the collapse. She had only started working at the store three months earlier.

In all, some 270 firefighters were involved in the search for buried survivors, which took 11 hours. Six people had to be hospitalized with injuries, while two more suffered minor wounds.

The cause of the collapse has yet to be determined; the state labor ministry has launched an investigation into the incident.