A desperate single mother-of-two whose chronic pain has left her unable to clean her dirty, cluttered home has revealed the immaculate makeover it underwent during the new episode of Filthy House SOS.

Master cleaners Brennan and Richard travelled to Thurleigh in Bedfordshire, to meet with Lisa on the 5Star episode which aired at 9pm tonight.

Lisa, who suffers from rheumatoid arthritis, said her chronic pain had made it impossible for her to keep on top of cleaning her three bedroom home.

During the clean up, Brennan and Richard were confronted with the horror of the house, including a dead mouse under the cooker, worrying levels of bacteria on her kitchen sink and cat urine on her living-room carpet. 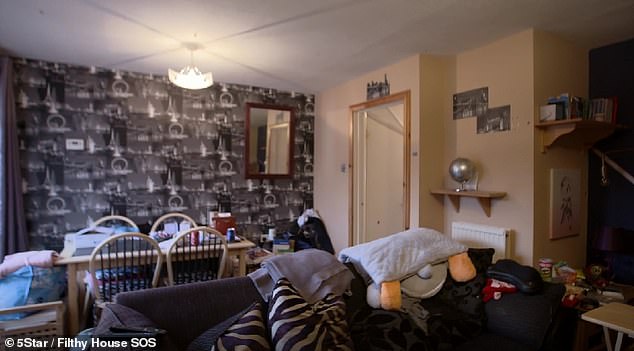 Master cleaners Brennan and Richard travelled to Thurleigh in Bedfordshire, to meet with Lisa on 5Star’s Filthy House SOS, which aired at 9pm tonight (pictured: living-room before) 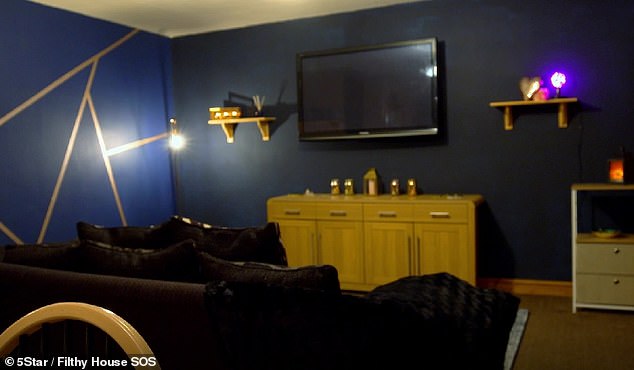 After the house makeover, Lisa’s living-room, pictured, was unrecognisable, tidy and rid of all the clutter 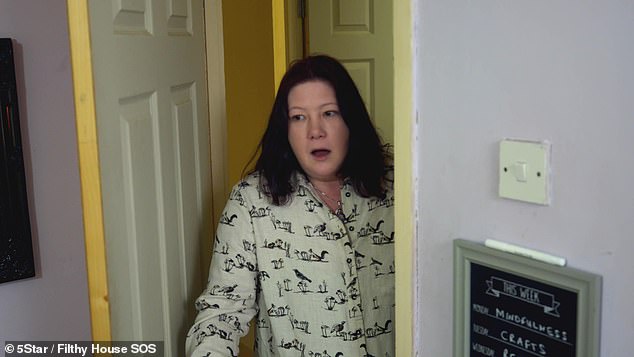 At the start of the show, the mother-of-two called the mess in her home ‘depressing’, saying: ‘I would describe my home as claustrophobic for me. The way it makes me feel, I’m embarrassed.’

Lisa used to work as a lunchtime supervisor, but was forced to quit because of her  rheumatoid arthritis.

She said her illness turned her whole life upside down, revealing: ‘I was on top of everything, I was happy, a single mum, loved life, loved being at home.’

She explained: ‘It just started with pain in my hands, I now have pain all over my body.’ 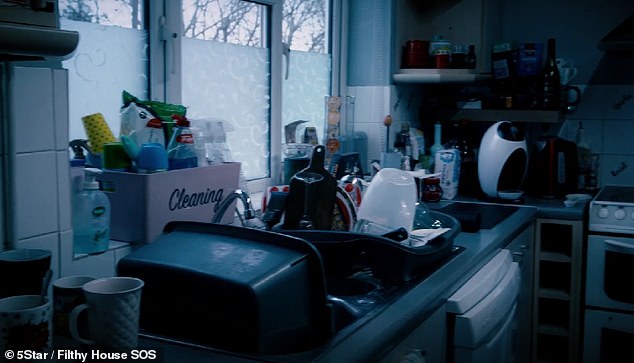 The kitchen was full of grime and had dangerous levels of bacteria by the sink, with the cleaning team finding a dead mouse underneath the sink 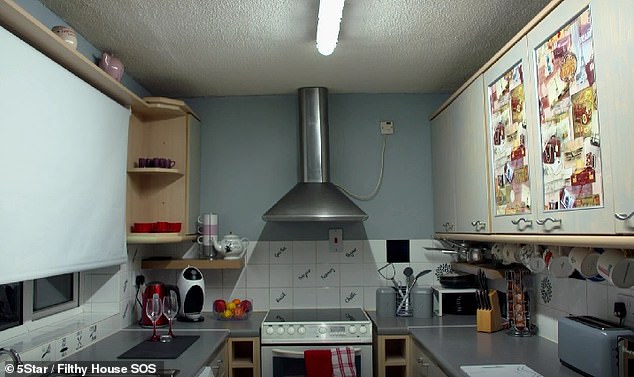 After the clean, Lisa’s kitchen was clean and tidy, with the team throwing away all her out-of-date products from her cupboard (pictured)

Her illness meant her mobility decreased and she was stocking items in her cupboards instead of putting them away properly.

She explained: ‘The fatigue is relentless. Having to fight through the day has made it so that I can’t work anymore.’

Speaking through tears, she said: ‘There is more things that I can’t do that I can do, I need help to sort this out, I need to get my home back to how it used to bet.

What is rheumatoid arthritis?

Rheumatoid arthritis is a long-term autoimmune disease that cause pain, stiffness and swelling.

It usually affects wrist, hands and joints throughout the body.

Symptoms become heightened during flare-ups, and flare-ups are hard to predict.

The cause for rheumatoid arthritis is unknown, however, there are increased risk factors, which include:

There is no cure for rheumatoid arthritis but early treatment and appropriate medication can space out flare ups.

Surgery and physiotherapy can also alleviate the symptoms of rheumatoid arthritis.

‘I’m not managing and I’m not coping.’

They noted her cupboards were full of cleaning products, but she wasn’t using them properly.

Meanwhile Brennan spotted cat hair in the fridge, as well as several out of date products.

He saw a jar of lemon curd which was a year out of date, as well as a box of granules that were over a decade past their best.

He said: ‘This is really bad, we’re finding over 90 percent of it is out of date and useless.

Seeing what lurked into her kitchen was a wake up call for Lisa, who started crying.

‘I don’t know what else to do,’ she cried, after admitting she bought cleaning products as a way of coping.

The team had to throw all of Lisa’s food in the bin for safety reasons.

They found her kitchen sink was full of bacteria that could be life-threatening to humans, and cleaned it with lemon and bicarbonate of soda.

In the living-room, Richard uncovered large amount of clutters in the cupboards, as well as pile of rubbish on the floor.

‘The living-room is a bit of a dumping ground,’ he said, adding, ‘things get put into little corners and something else get on top of it and very quickly thing can get forgotten.’

As the cleaning team tackled the mess in the home, Richard spoke with Lisa about her illness.

She said: ‘It makes me feel lazy and not worth anything. My mobility has decreased so much in the last couple of years.

‘When I was first diagnosed it was just my fingers in the morning to now everything hurts,’ she added.

‘I used to be very knowledgeable as well, it’s changed everything,’ she said, after explaining she felt like she had the flu everyday, and suffered from brain fog due to the pain. 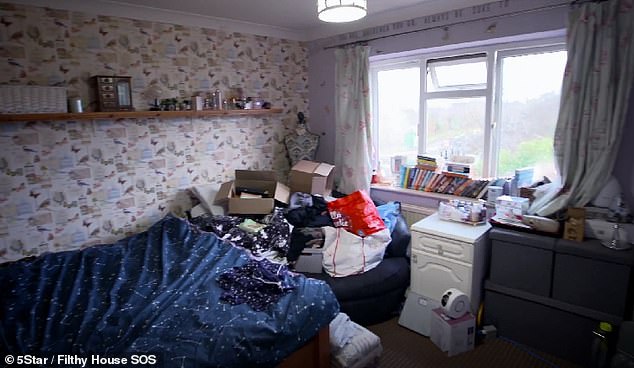 Richard said it looked like Lisa’s bedroom, pictured, had ‘given up’ before he started working on it 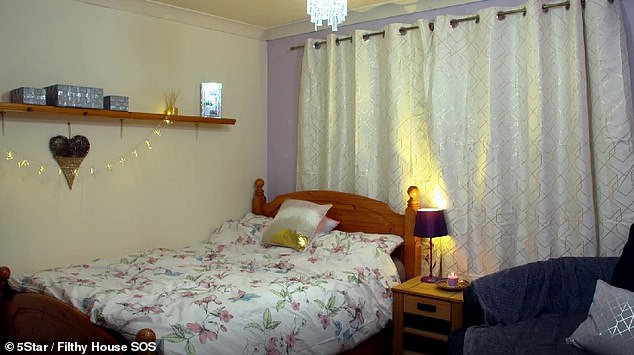 After the makeover, the room was much tidier, with  Richard even rearranging the furniture to make the space feel more spacious

She even explained going for a light walk was challenging for her, saying: ‘It’s not easy, I don’t tend to do it as much as I’d certainly like to.

‘I don’t like using a stick because rheumatoid arthritis is a hidden disease, people are very judgmental, I find that very difficult to live with.’

However, she found that just by speaking about the disease, she felt more at ease, explaining: ‘To speak to someone that tries to understand how it must feel is wonderful and very different to me and I’ve surprised myself how much I have opened up because ti’s not the sort of thing I would normally do.’

As the battle against grime continued, Brennan was disgusted to find a dead mouse under Lisa’s cooker. 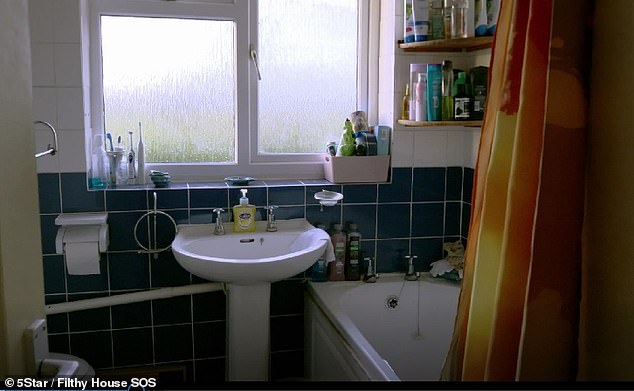 The bathroom was full of grime and the shelves were overflowing with half-finished products, pictured 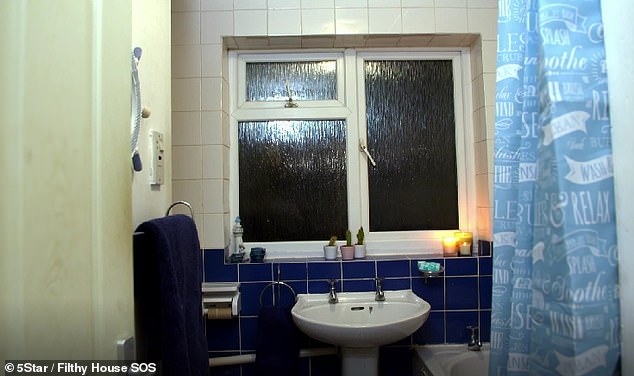 After Brennan was finished with the bathroom, it looked much nicer and a place Lisa could have a relaxing bath, pictured

According to Richard, the worst room out of the whole house was Lisa’s bedroom. which he said looked as though it had ‘given’ up.

She agreed things needed to change and after a few hours of clearing the room up, Richard said it already looked completely different.

At the end of the three days, Lisa was ready to discover what her house looked like after the deep clean.

Upon walking into the tidy living room, she burst into tears, saying: ‘I don’t actually know was to say. This room is unrecognisable.

She added: ‘You’ve changed it to suit my needs, you brought my personality into my home and you made it somewhere where I want to be.’