Mother is branded ‘insane’ after revealing she made her sick son wear a POTATO necklace to cure his 102.3-degree fever

An American mother is being mocked and ridiculed for claiming that a necklace made of potatoes cured her son’s fever.

The woman shared her magical remedy on Twitter on December 29, posting two pictures of her young son wearing a string of tiny potato cubes around his neck.

She wrote with amazement that he started out with a fever of 102.3, but a full day later he was down to 98.2 and the potatoes had turned black — evidence, she said, that it ‘really works.’ 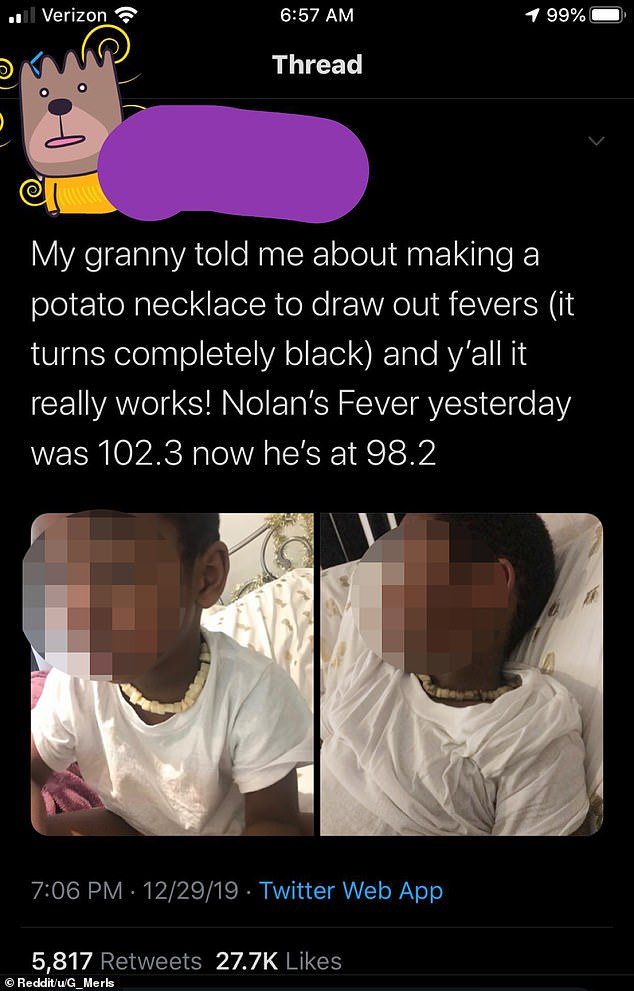 Faux science: An American mother claims that a necklace made of potatoes cured her son’s fever

The woman has since deleted her tweet, likely because of the ridicule she faced online — but not before a Redditor shared a screengrab of it.

‘My granny told me about making a potato necklace to draw out fevers (it turns completely black) and y’all it really works!

Can potatoes really help to cure a fever?

It is believed that raw potatoes were first suggested as a cure for cold and flu-like symptoms as early as the Middle Ages, when the bubonic plague began spreading throughout Europe.

At the time, it was recommended that people put raw sliced potatoes in their socks, against the soles of their feet.

Since then, the remedy has evolved and transformed – however there is no scientific evidence to support claims that potatoes will work as a cure.

She included before and after photos, one showing a miserable child sitting up in bed with a new white potato necklace around his neck, the other showing him sleeping with the potato necklace, now black.

There is absolutely no scientific evidence that potatoes can cure a fever, though the myth still persists.

However, what the woman failed to note is that potatoes turn black when they are exposed to air, and would have likely ended up the same color had they simply been left out on a table.

Redditors were horrified and exasperated that the mother believed the ‘trick’ worked.

‘What if the potato gets dark left on a table? Is It draining the table’s bad Energy or something, lmao? How can people believe this kind of stuff, like bruh, you serious?’ wrote one.

‘Beyond the other insanity, I love how surprised the person is that the fever went down the next day. “Fever went down after 24 hours? Inconceivable! Can only be magic potatoes,”‘ wrote another.

The woman is not the only person to suggest potatoes as a cure-all; another DIY remedy that is thought to date back to the Middle Ages suggests putting sliced raw potatoes inside your socks to cure cold and flu-like symptoms.

Some Reddit commenters also chimed in to share that their family members swear by similar miracle cures.

‘My fiance’s mom uses socks soaked in vinegar to get rid of a fever. She always gets mad when I tell her the only thing it got rid of was pleasant smells,’ wrote one.

‘My mom and grandma used to do the sock thing for me when I was young. After seeing this post it reminded me that they also filled a scarf with shredded raw potato and wrapped it around my neck whenever I had a fever,’ said another.

‘[There’s] something similar that my mom does — only it’s chopped raw onions worn in socks overnight. She swears by it,’ said a third.