A devoted mum is celebrating being able to hug her children and grandchildren for the first time since she lost all four limbs to deadly sepsis four years ago.

Mother-of-five Sue Neill, 52, can finally have the cuddles she longed for, after receiving the first of two bionic ‘Hero Arms’ in July – and is marking World Sepsis Day today by speaking out about the horrific condition, which robbed her of her nose, lips and tongue, and meant she needed all four limbs amputated in 2017.

The former carer, of West Wittering, Chichester, West Sussex, was struck down with sepsis – a life-threatening reaction to an infection associated with 20 per cent of deaths worldwide, according to the Global Sepsis Alliance – after she had a seemingly simple gum abscess.

She was fitted with a new right arm that uses robotic prosthetics in July 2021, thanks to her cousin who donated a staggering £10,000 to her GoFundMe crowdfunding appeal.

Sue  is now able to use the arm for small tasks and hopes to have her second life-changing arm fitted later this year.

The arms respond to the wearer’s muscle movements using sensors, but are not available on the NHS. Something Sue hopes to see change. 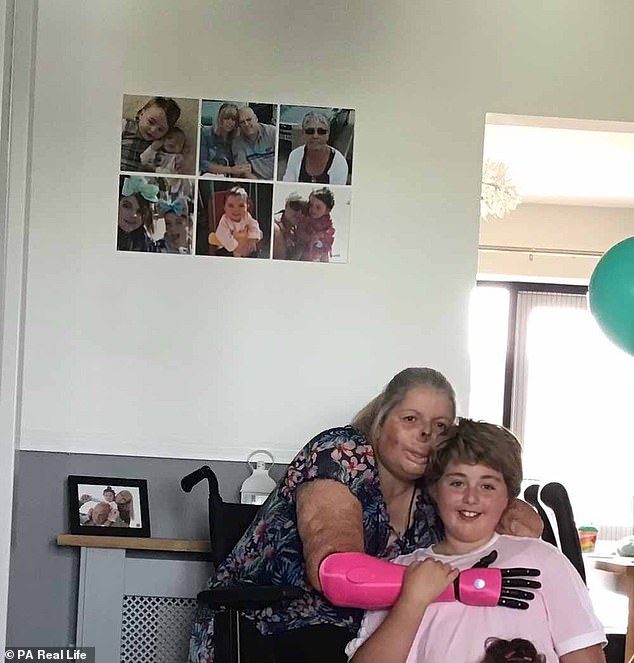 Mother-of-five Sue Neill, 52, from West Wittering, Chichester, in West Sussex, was able to hug her grandchildren for the first time in three years after she was fitted with a bionic arm, pictured. Sue lost all her limbs, tongue and lips after contracting life-threatening sepsis in 2017

Sue said: ‘Cuddling the kids again was amazing. I’ve had a lot of pictures taken cuddling them on my knee. My little grandkids love my arm and they keep saying, “That’s so cool”.

‘It’s wonderful just be able to hug them again. The kids love it – and I love it. I can’t believe it.

‘The kids keep making me shake hands with them too!’

Sue, who lives with former lorry driver husband Dean, 54, son Connor, 25, and daughter Kaylee, nine, and also has a son Chris, 35, and daughters Stacey, 32, and Chloe, 22, has been through hell after she suffered a small nick in her gum at the dentist in January 2017. 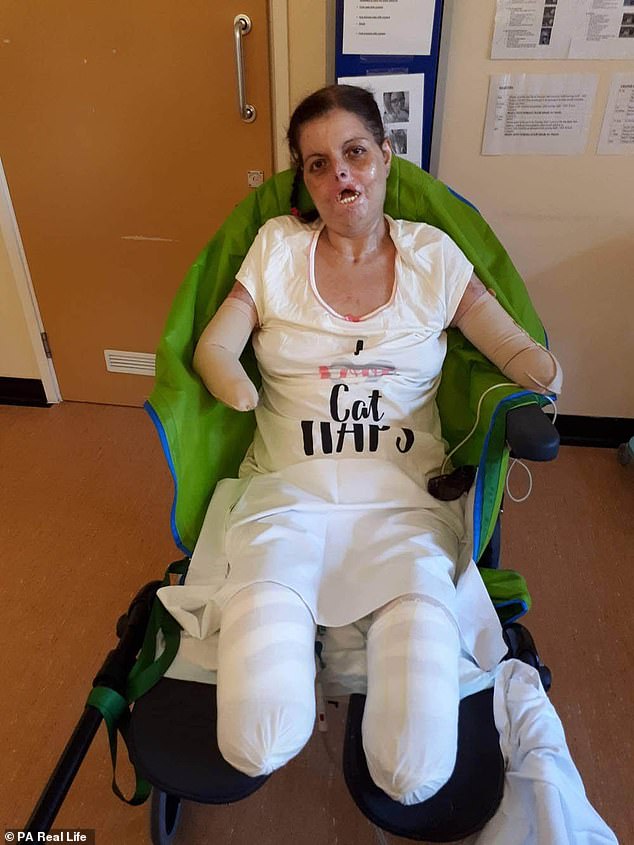 Sue caught sepsis from a small cut during a routine dentist appointment. To save her life, doctors had to cut her limbs. Pictured in hospital in 2017

An abscess developed a few days later, then her face began to swell, leaving her struggling to see or hear.

She seemed to rally after two rounds of painkillers and antibiotics, but on February 25 Dean found her on the sofa with her face turning blue.

‘He thought I was already gone,’ Sue said.

Rushed to St Richard’s Hospital in Chichester, Sue’s stricken family were repeatedly told she was unlikely to survive and her limbs were amputated.

Miraculously, she pulled through, but then had to learn to live with her changed body, spending a year in gruelling rehab. 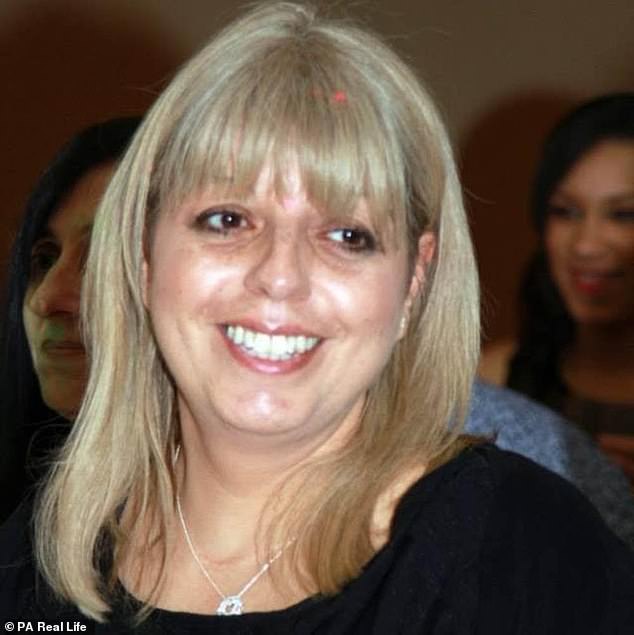 Pictured before: Sue, who wants to share her story on World Sepsis Day, said the arms should be available to patients on the NHS

Sue said: ‘At first, I couldn’t talk and for over a year, I couldn’t even look at myself in a mirror.

‘I hate the word stumps. These are my arms and legs. So be it if I haven’t got much of them. I’m lucky to be alive, but I’m still me.’

Sue was unhappy with the heavy prosthetics she was given and pinned her hopes on high-tech bionic ‘Hero Arms’ developed by Bristol-based Open Bionics.

They respond to the wearer’s muscle movements using sensors but are not available on the NHS.

When her cousin Carmen Lewis, 56, a pharmaceutical wholesaler, and her husband Gary, donated enough to pay for the arms, alongside her GoFundMe and some charity donations, Sue was overwhelmed with gratitude and, after several fittings, her new right arm was ready to slot on. 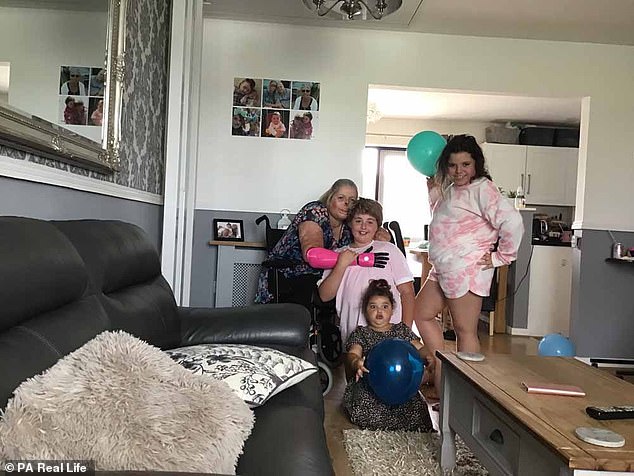 Sue, pictured with her daughter Kaylee and her grandchildren, has been building her upper body strength in order to use the arm 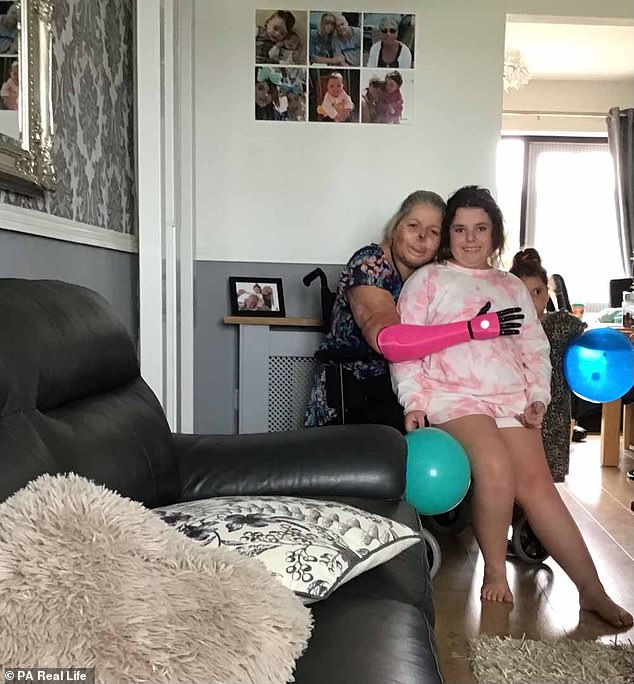 The mother-of-five, pictured with Kaylee, admitted she couldn’t talk following her sepsis in 2017 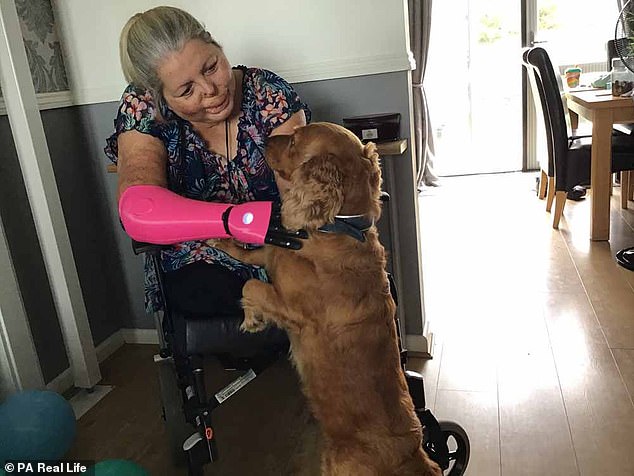 Sue is even able to pet her dog thanks to her arm, which works by responding to her muscle movements using sensors

What are the key symptoms of sepsis? The ‘silent killer’ that can cause death in minutes

Sepsis, known as the ‘silent killer’, strikes when an infection such as blood poisoning sparks a violent immune response in which the body attacks its own organs.

It is a potentially life-threatening condition, triggered by an infection or injury.  Around 245,000 people develop sepsis in the UK each year and 52,000 die, according to the UK Sepsis Trust.

Instead of attacking the invading bug, the body turns on itself, shutting down vital organs.

If caught early enough, it’s easily treated with intravenous antibiotics and fluids, but these must be given as soon as sepsis is suspected – it strikes with frightening speed and, for every hour of delay, a patient’s chance of dying increases 8 per cent.

Sepsis is a leading cause of avoidable death killing 44,000 people each year

The early symptoms of sepsis can be easily confused with more mild conditions, meaning it can be difficult to diagnose.

A high temperature (fever), chills and shivering, a fast heartbeat and rapid breathing are also indicators.

A patient can rapidly deteriorate if sepsis is missed early on, so quick diagnosis and treatment is vital – yet this rarely happens.

In the early stages, sepsis can be mistaken for a chest infection, flu or upset stomach.

It is most common and dangerous in older adults, pregnant women, children younger than one, people with chronic conditions or those who have weakened immune systems.

The six signs of something potentially deadly can be identified by the acronym ‘SEPSIS’:

Anyone who develops any of these symptoms should seek medical help urgently — and ask doctors: ‘Could this be sepsis?’

Initially, only able to wear it for 10 minutes, Sue has been building up her strength and can now use it for two hours a day.

She said: ‘It’s not heavy, but it’s a lot heavier than my shortened arm was. I need to build up my upper body strength and I need to be patient. It’s a big learning curve.

‘I’ve got a long way to go, but it’s good to see improvements as the days go on and I hope I can wear it all day long. I have no idea when that will be – but I’m hoping it could be as soon as next month.

‘I’m eagerly awaiting the second arm. That will be fitted once I’ve got used to the first one – I can’t wait!’

And Sue is already able to do more things independently. 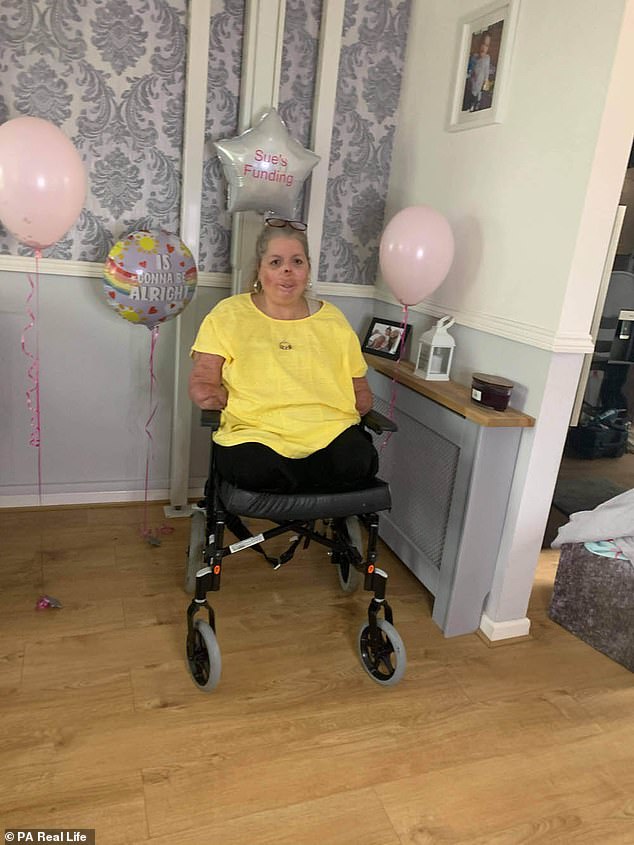 Sue, pictured after her release from hospital, said she couldn’t look at herself in the mirror for a year following her amputation 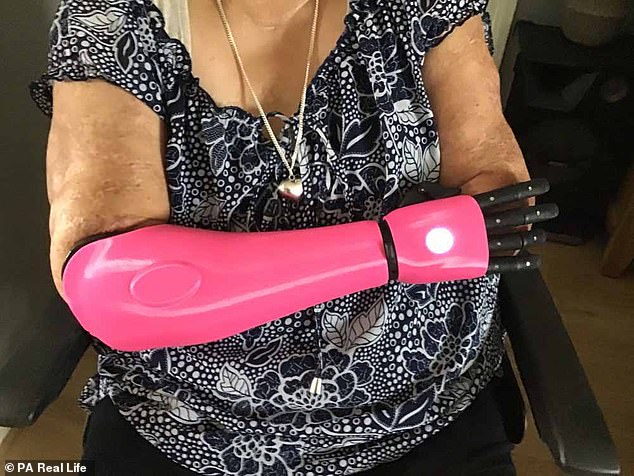 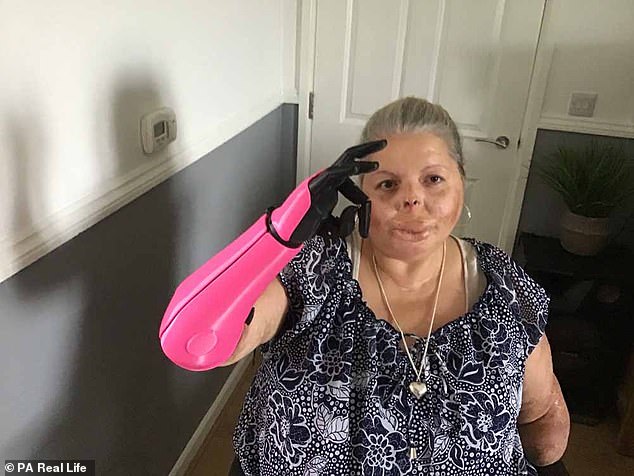 Sue said the bionic arms, pictured, are ‘much nicer on the eye’ than other prosthetics and are not trying to look like real arms

‘I’ve brushed my hair,’ she said. ‘I’ve learned to pick up sweeties or little things from the table.

‘I’m sure I’ll look back on this in a year’s time and think, “Remember when I couldn’t do anything?”

She is also looking forward to wearing the arm out, adding: ‘Cosmetically, they look interesting and much nicer on the eye than other prosthetics. It’s not pretending to be a real arm, so I think it looks really cool, robotic and colourful. 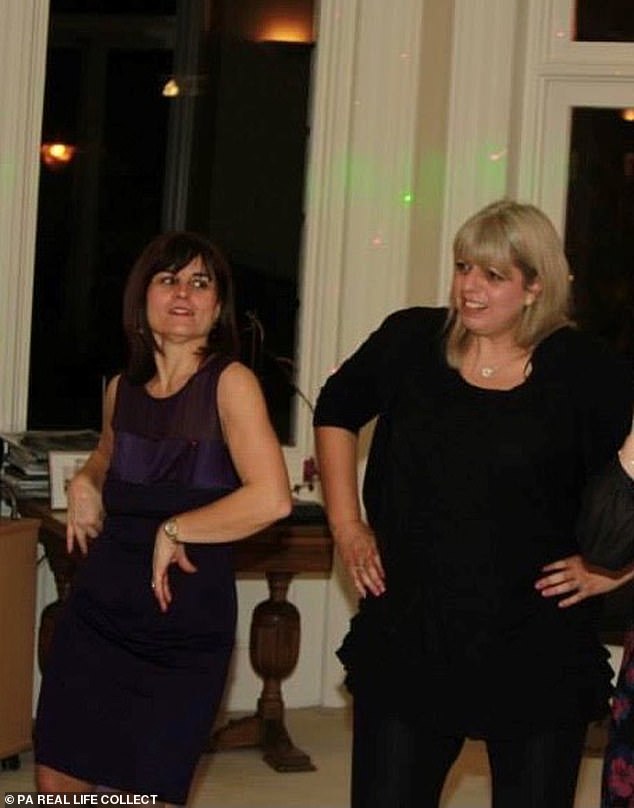 Sue, pictured before, said she doesn’t like the term ‘stump’ and that her limbs are still her limbs, just shorter 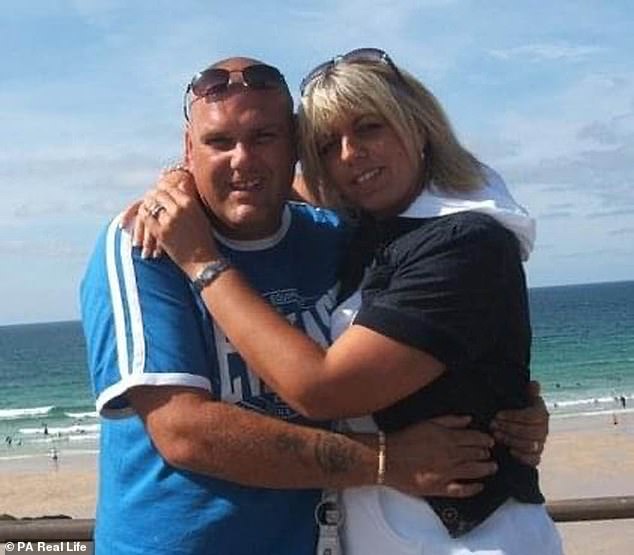 Her husband Dean, pictured with before, left, and her cousin Carmen donated enough money to afford the arms 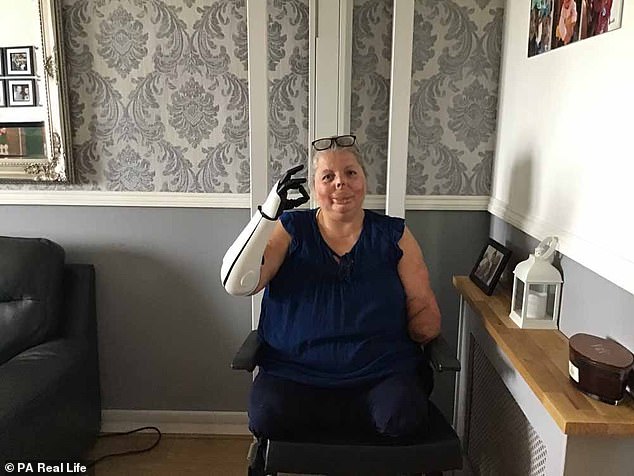 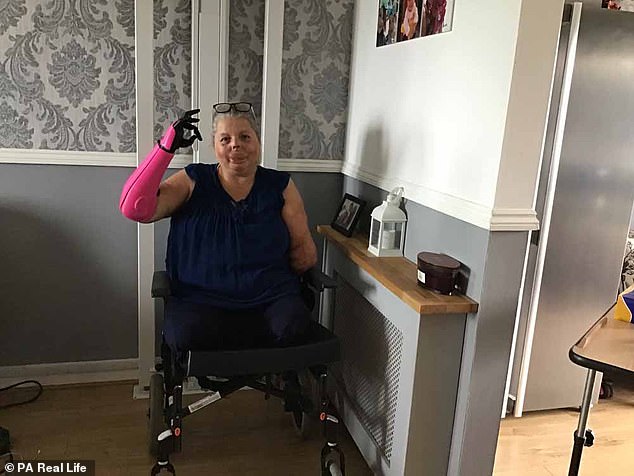 The grandmother said she is eagerly waiting for the second arm to be fittd, and said the arms should be available to other NHS patients

‘I’m planning to wear it out next week when I go to the shops or out in the village – and I hope people ask me about it!’

Now Sue is determined to raise awareness of the risks of sepsis and highlight the need for better prosthetics to be available on the NHS to amputee patients.

She said: ‘I am very passionate about them being available on the NHS.

‘None of us asked to lose our limbs. It all happened through accidents, illness or people that have unfortunately been born this way.

‘Our government needs to relook at this within the NHS – it’s about giving its citizens the best they can when something horrible happens to them.’ 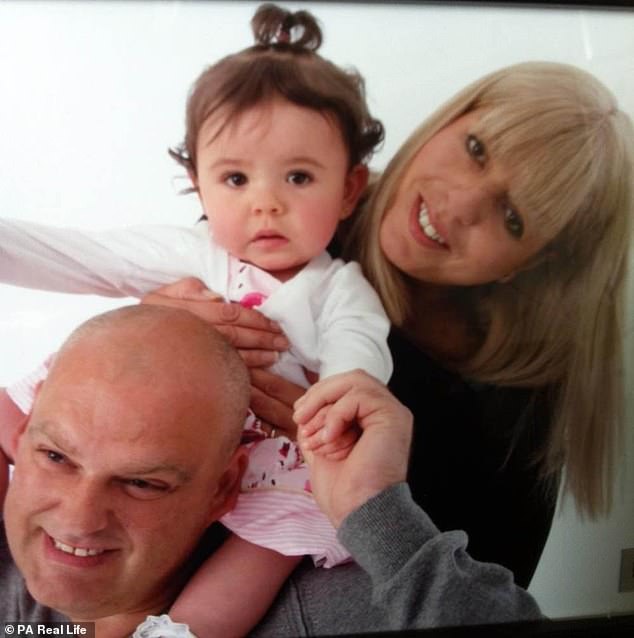 The mother-of-five, pictured before, said sepsis isn’t people’s fault and that the government should help them overcome something so horrific 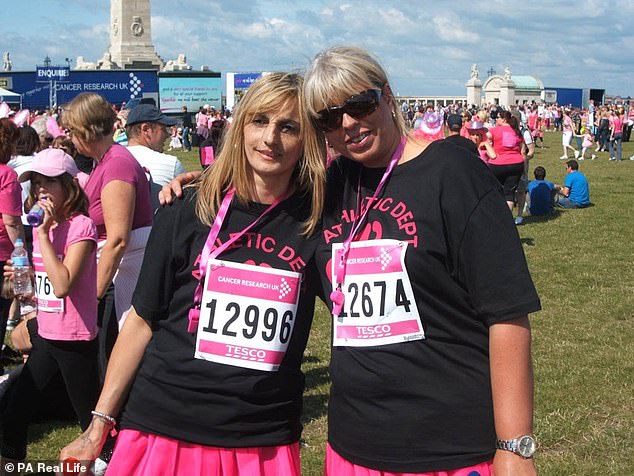 Sue and her sister Danna, left, running for cancer research before her bout of sepsis. Sue has had to adapt to her new life 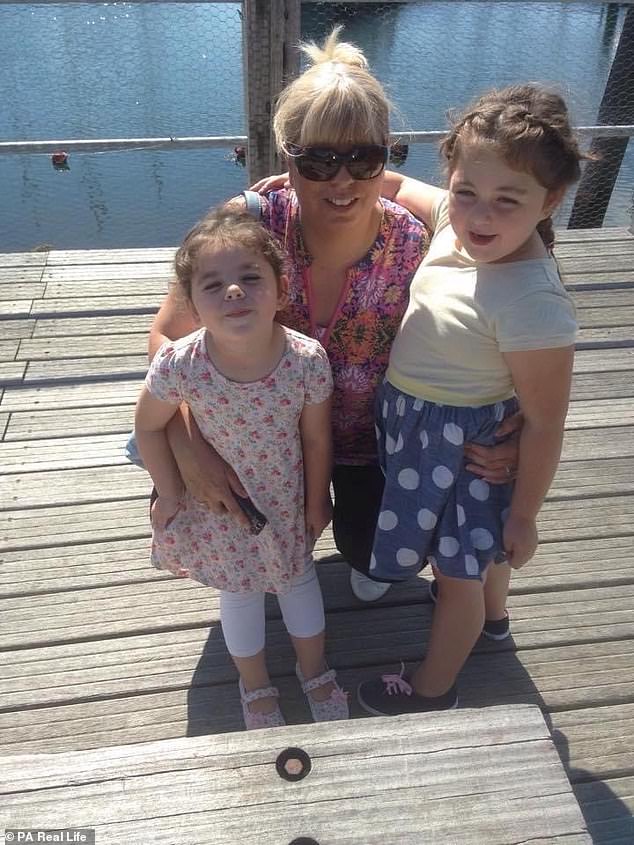 Sue, pictured before with her daughter Kaylee and her granddaughter Emmie. After three years, she can finally hug them again