Australia's leaders will eyeball each other in the same room for the first time in nine months of national cabinet's existence – except for Western Australia's Mark McGowan whose state's health advice doesn't allow him to share space with South Australians.

Some states, including Victoria and the ACT, are expected to use Friday's meeting of national cabinet to press the Commonwealth for a proper plan to start bringing international students back to Australian universities early in the new year. 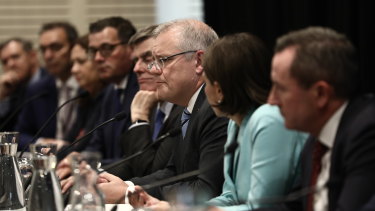 Members of the national cabinet will meet in person for the first time since the final COAG meeting in March.Credit:Dominic Lorrimer

After national cabinet last met a month ago Prime Minister Scott Morrison shelved the idea to bring international students to the country with special arrangements, saying the priority for quarantine places had to be Australians stranded overseas. Since then, the Commonwealth asked the states to submit plans signed off by their chief health officers for how students could safely return after Christmas.

The loss of international students – particularly new starters who typically arrive for the second semester – as Australia keeps its borders closed has dealt a heavy blow to the university sector, which has shed thousands of jobs.

National cabinet will also get an update on plans for the vaccine rollout, the economic situation, each state's progress on reopening, and how the new grouping should work into the future.

It is the first time leaders have met in person since March, when they joined for the final Council of Australian Governments before it transformed into national cabinet.

Mr Morrison expects there to be some contemplation of the past year.

"We will sort of reflect on what has been quite an extraordinary year, a few disagreements here and there but we go into 2021 I think looking optimistic but knowing we've got a lot more work to do," he told 2GB radio. "[National cabinet] has been a good innovation … we're hoping to take the lessons from how we've worked together this year and make it even better next year."

While COAG might no longer exist, some of its old rhythms continue, including leaders dining together at the Lodge on Thursday night. They'll also meet with Governor-General David Hurley.

Mr McGowan won't join his colleagues in Canberra after WA health officials set a 14-day quarantine period after meeting "known South Australians" – even if they're the Premier.

South Australia's Steven Marshall said that “doesn’t make a lot of logical sense” given his state has no active cases of coronavirus and has gone 12 days without community transmission following an outbreak from hotel quarantine in mid-November that infected 33 people.

Mr McGowan said the issue had been overblown and he won't miss any meetings. "I'm part of everything except for dinner," he said.

Mr Morrison expected everyone would be safe. "I'm not going to make Steven Marshall sit in the corner in a plastic suit or something," he said.

Friday will mark the 32nd meeting of national cabinet and the first of the new Federal Reform Council, which brings the leaders together with their treasurers and a local government representative and has a more formal administrative agenda.