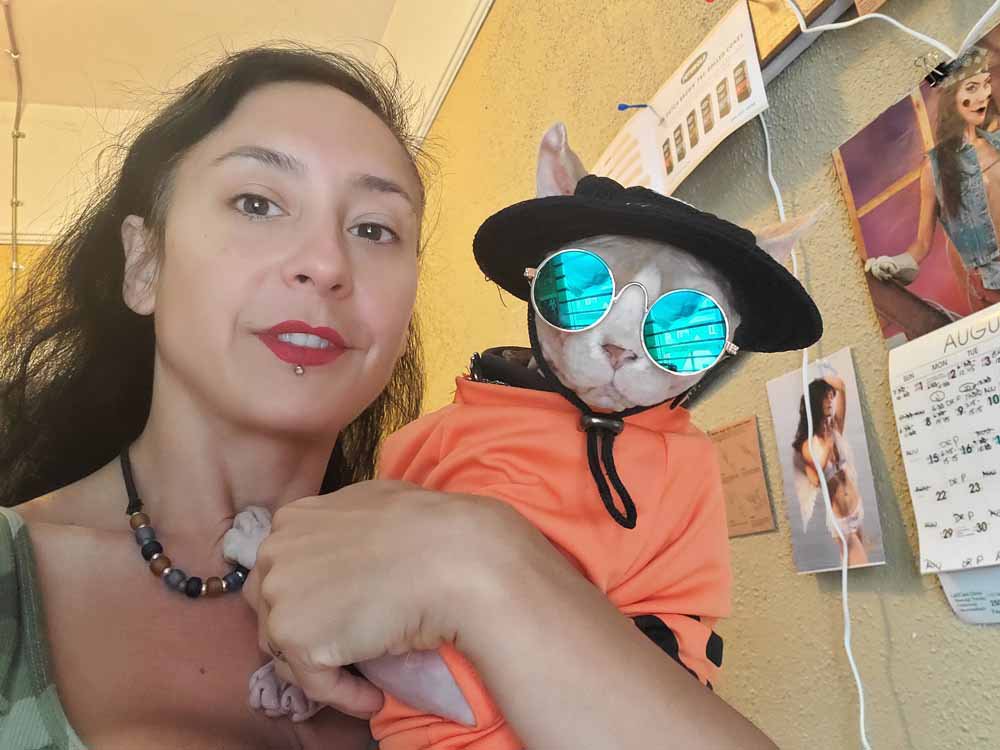 A cheeky cat gave his owner a massive fright after playing around with fake blood in the night and waking her up.

Imogen Cookie-Bailey, 42, was horrified to wake up covered in pet Morbo’s blood, seeping from a livid red gash across his neck.

Fearing he’d been in a terrible accident Imogen burst into tears and tried to help him, realising later that he’d got into her special effects makeup stash.

Imogen, of Victoria, British Columbia, Canada, said: ‘I woke up to find blood everywhere and I couldn’t catch Morbo to figure out what was wrong.

‘I was crying because I thought I was about to lose my boy. He’s like a child to me. I got him six years ago after my previous cat, Mr Fish, passed away at 16.

‘But, I realised when I got to the bathroom that he’d raided my make up bag and the blood washed off.

‘Clearly it’s very good quality make up because it fooled even me!’

Also a personal trainer and fitness model, Imogen’s main job is in the mental health field and she learned to be a special effects make-up artist to help with paramedics’ training.

She said: ‘It was something I did on the side, which is why I had so much special effects make up in the house.

‘When a paramedic was still learning for the job, I would use make up to fake certain injuries on dummies, so they could figure out what was wrong and how to treat them.

‘I had a bag full of different special effects make up and fake blood that I kept in the bathroom, so that I could practice recreating different injuries.’

But, one summer’s evening after she left her make up bag open when she went to bed, she woke to a terrible shock.

She said: ‘Because I’d had a late night, I slept in and Morbo came into the bedroom to wake me up.

‘I was dragging my feet about getting up and he was probably hungry for his breakfast, because he was being extra cuddly that morning, nuzzling his head into my neck.

‘I was giving him a pat on the head and struggling to get my eyes open because I was so tired, but as I did, I noticed there was something red on my hand.

‘I blinked and realised that I was covered in Morbo’s blood.’

The expensive makeup is designed to have the same consistency as real human blood, and as Morbo is a special breed of hairless cat, it had stuck to his body as if it was seeping from a deep wound.

Luckily, on this occasion, curiosity had not killed the cat – rather, he had been playing dress up with Imogen’s make up, which she noticed was splattered across the bathroom.

‘I couldn’t even be mad at him, because I was just so relieved that he was okay,’ she said.

‘To be honest, I just sat down on the bathroom floor and wept like a baby with relief.

‘I’d had visions of whatever terrible thing had happened to him, but in fact, he’d just been messing around with my make up. I was so glad that he was all right.’

And the spynx cat is now too busy these days for another ghoulish makeover.

Imogen said: ‘I work in mental health and Morbo has recently started joining me as a therapy animal.

‘People I work with find him very comforting. He’s such a little character that he can brighten up anyone’s day.

‘And while he gave me the fright of my life that morning, he’s normally an angel.

‘But I keep my make up out of reach now – just to be on the safe side.’

Get in touch at [email protected]