Nigella Lawson has divided opinion with her casserole recipe which includes forty cloves of garlic.

‘This is a classic for a reason. The garlic cloves cook in their skins until mellow and sweet. Bread for dipping essential.’

But it wasn’t long before the post was flooded with comments – with many fans poking fun at the recipe. 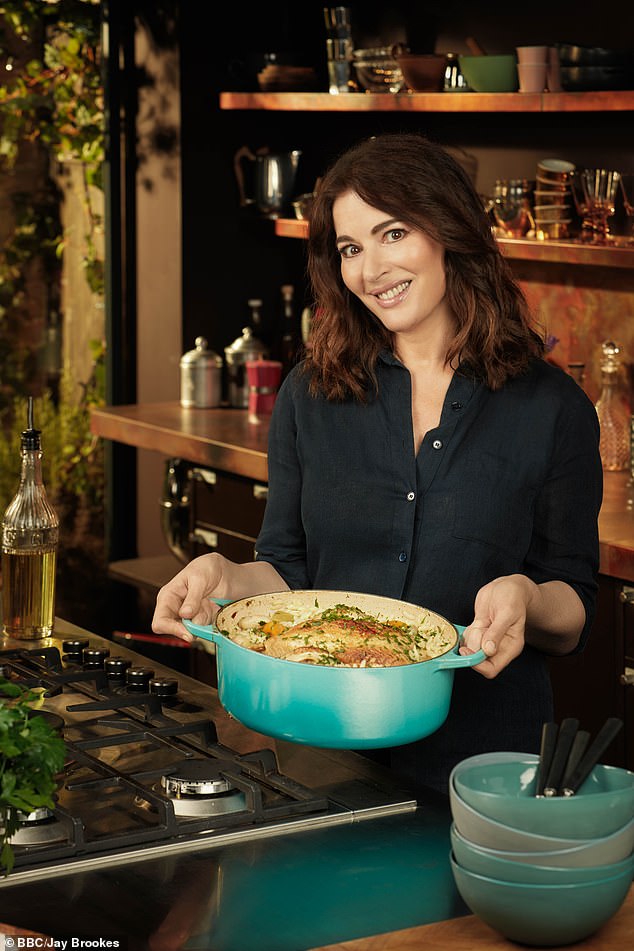 Nigella Lawson, 61, has divided opinion as she took to Instagram to share her chicken casserole dish as her Recipe of the Day which includes forty cloves of garlic

8 chicken thighs with skin on and bone in (preferably organic)

Preheat the oven to 180°C/gas mark 4/350°F. Heat the oil on the hob in a wide, shallow ovenproof and flameproof casserole (that will ultimately fit all the chicken in one layer, and that has a lid), and sear the chicken over a high heat, skin-side down. This may take 2 batches, so transfer the browned pieces to a bowl as you go.

Once the chicken pieces are seared, transfer them all to the bowl. Finely slice the spring onions, put them into the casserole and quickly stir fry them with the leaves torn from a few sprigs of thyme.

Add the vermouth (or white wine) to any oily, chickeny juices left in the bowl. Swill it around and pour this into the casserole.

Sprinkle with the salt, grind over the pepper, and add a few more sprigs of thyme. Put on the lid and cook in the oven for 1½ hours.

The recipe – which serves four to six people – includes eight chicken thighs and is also flavoured with white wine, thyme and pepper and salt.

Nigella tried to play down using so much garlic, saying the taste and smell is softened because it is  cooked in its skins.

On her website Nigella added: ‘When I was young, this old French classic was still – though in a quiet way – very much in vogue.

‘I dare to say it was because the novelty of using so many garlic cloves had not worn off. It seemed somehow dangerously excessive. 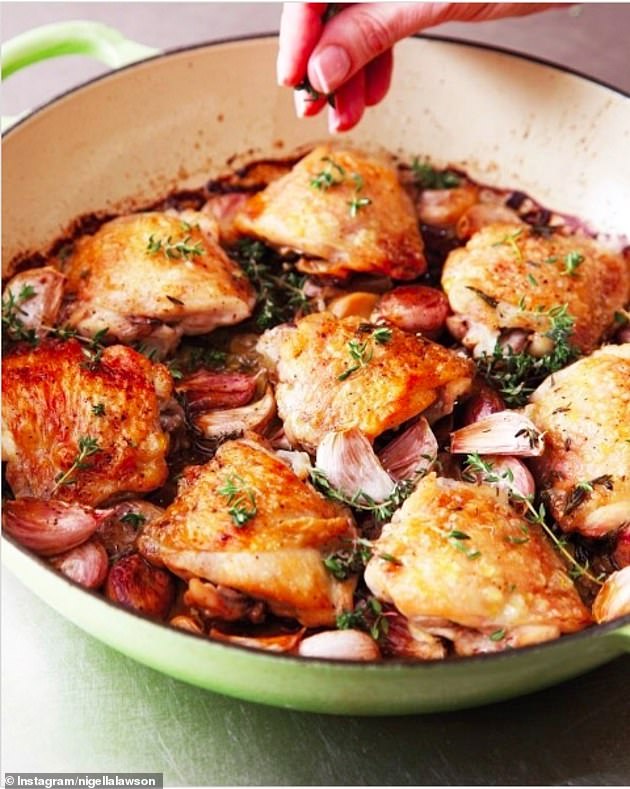 ‘Even so, I don’t think anyone would think it quite unremarkable now to put 40 cloves of garlic in a casserole.

‘Certainly, if you peeled and chopped – let alone minced – the garlic, it would be inedible.

‘But garlic cloves cooked encased in their skins grow sweet and caramelly as they cook, like savoury bonbons in their sticky wrappers, rather than breathing out acrid heat.

‘This is a cosy supper, not a caustic one.’

However foodies were left unsure by her latest recipe, with one writing: ‘Not recommended for a first date.’

Another joked that the meal would go down well in Transylvania, Romania, where the legend of Dracula is based, as garlic is thought to ward off vampires.

Another quipped: ‘Did you actually count them Nigella?’

But some fans seemed to find forty cloves a rational amount, with one even teasing the recipe could still have used more

But some fans seemed to find forty cloves a rational amount, with one even teasing the recipe could still have used more.

One said: ‘Forty cloves seems entirely reasonable to me,’ while a second added: ‘Not enough garlic,’ and another gushed: ‘Garlic overload, I love it.’

National treasure Nigella is no stranger to controversy over her dishes, as she she split opinions last month by putting bacon in her chocolate brownies.