Prime Minister Scott Morrison has expressed his confidence in acting Industrial Relations Minister Michaelia Cash as the government prepares to push its workplace overhaul through Parliament in the absence of the man she has temporarily replaced, Christian Porter.

Mr Porter, who is also Attorney-General, has been on leave seeking mental health assistance since Wednesday, when he rejected an allegation he raped a debating teammate in 1988. Mr Morrison said on Tuesday there was no set date for his return. 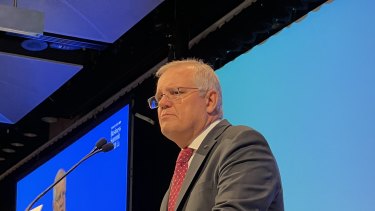 “I’ve spoken to Christian as have many colleagues in providing their support,” Mr Morrison said. “And at this stage, he hasn’t advised the date he’s returning.”

The government had planned to get its industrial relations overhaul, which aims to encourage businesses to take on new staff by simplifying the employment system but has been slammed by unions and Labor as an attack on workers’ pay and rights, through the Senate next week.

Despite opposition from Senate crossbenchers, Mr Morrison signalled the government was not backing away from its timetable.

“I have absolute confidence in Michaelia,” Mr Morrison said. “Minister Cash has had quite a bit of experience getting important industrial relations legislation through the Parliament in the past.”

As employment minister, Senator Cash secured the 2016 passage of legislation establishing the Australian Building and Construction Commission, which was derided by critics as a “union busting” exercise but billed by the government as a way to crack down on “lawlessness” in the industry.

Australian Council of Trade Unions secretary Sally McManus, who has led the unions’ campaign against the government’s industrial relations changes, called for Mr Porter to face an independent investigation into the rape allegation but said she would engage with whoever held the industrial ministry.

“Our job is to advocate on behalf of working people and that means dealing with the minister for industrial relations, whoever that might be,” Ms McManus said last week. “We don’t get to choose who the minister is, and while any investigation is occurring it would be proper for the person to step aside.”

A Senate committee examining the industrial overhaul laws is due to deliver its report on Friday.

When Does 'Superman & Lois' Return? Episode 6 Release Date Is Here