Home » Lifestyle » Pain is conjured by a terrible absence

It all starts with a happy ending. A five-year-old missing child – Laura – is restored to her parents, safe and sound, after nine agonising months. So many emotions – joy, relief, love, wonder. But all is not quite right. Laura won’t speak, at first. She seems different. She is different. Or is it them, the mother and father? Have they changed?

Hilary Bell’s Splinter was first presented by Sydney Theatre Company in 2012. In the original production Laura was represented by a Bunraku-style puppet operated by two puppeteers, who became intrinsic parts of the drama. In this new production Griffin Theatre Company’s Artistic Director Lee Lewis rekindles Bell’s powerful drama by representing Laura not as a presence, but as an absence. 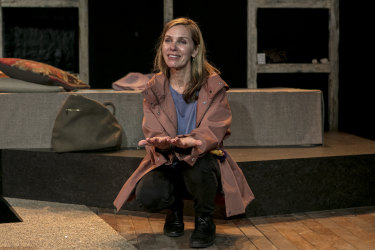 Lucy Bell is brittle and beautiful as the disorientated mother.Credit:Brett Boardman

The child, who is refusing to speak, exists for us through the eyes of the mother and father. They speak to her, play with her and cradle her, wrapped in a quilt. But, crucially, she is not there, and her absence demands a level of wilful belief on the part of the audience that becomes a mirror of the belief that the mother and father must invest in this unfamiliar, mute, invisible child. A belief all too vulnerable to a splinter of doubt.

As Laura’s mother and father, Lucy Bell and Simon Gleeson ride the emotional roller-coaster, sometimes together, and sometimes in vertiginous opposition. Bell is brittle and beautiful, anxiously folding Laura’s clothes and straightening out the table, a nervous smile across her face as she, once again, handles her husband’s delusional behaviour. Gleeson is more of a dark force, snapping from hope to fear, and viscerally disturbed by his wife’s credulity. Together, they braid together the halting, shifting words in a seamless, pacy crescendo of suspense.

The Stables Theatre is an ideal setting, at once intimate and claustrophobic, with a beautifully restrained underscoring (Alyx Dennison) and trippy projections (Mic Gruchy). But Splinter barely needs special effects. It doesn’t even need a Laura. Hilary Bell’s lyrical prose orchestrates the gothic, leaving us suspended over the abyss.