Home » Lifestyle » Painting by the numbers: How to win the Archibald Prize

It’s the art prize that stops the nation – or at least makes a substantial number of folk briefly consider a bunch of paintings before going back to Netflix and the footy.

Now in its centenary year, with the latest winner to be revealed on Friday, the Archibald Prize is also the annual festival of “I could have done that” and “It looks nothing like them” as we all become self-appointed critics rather than leaving all that to the official self-appointed critics.

So just what does it take to get your hands on the $100,000 winner’s cheque and forever be referred to as “Archibald Prize winning-artist so-and-so”? 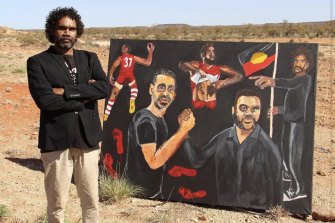 Obviously, if there was a simple formula, I’d have cracked open the Winsor and Newtons myself and knocked out a winner or two by now but there is clearly a bit more to it than that. However, there are some pointers to be had by examining the runners and riders from the past 50 years.

And the first big lesson of Archibald history is that it helps to be a bloke. A lot.

Casting an eye over the artists that made it to the winners’ enclosure over the past half century you’ll find more than 80 per cent have been men.

(Go back before 1970 and it’s an even bigger bloke-fest, with just three women getting the nod in that period).

Since 1970, only nine winners have not been women. However, the good news is that women are gradually levelling the playing field. Two of the past six winners have been female and for the first time, there has been an even gender split between finalists this year.

So much for the artists, what of the subjects?

Go back to the first half of the Archibald century and some 75 per cent of the winning pictures were of blokes in suits or uniforms, which is why William Dargie’s winning 1956 portrait of Albert Namatjira is such a breath of fresh air. Not only was it the first Indigenous subject to win, equally controversially Namatjira is depicted tieless.

And while on the topic of race, it was Albert’s great great grandson Vincent who last year became the well-deserved first Indigenous winner.

Forty per cent – by far the largest category – of subjects since 1970 have been other artists. Artists, apparently, like to paint artists.

Winners during the past 50 years have occasionally used materials such as acrylic but one medium reigns supreme – oils, making up about 80 per cent of winning entries.

The controversial 1978 winner, Art, Life and the other thing, famously rejected the dominance of oil, employing materials that included a glass eye, hair, pen, ink, dried glue, cigarette butts, and a hypodermic syringe. But then the artist was Brett Whiteley.

Whiteley’s winner, being a triptych, also broke other Archibald conventions, but its overall size was broadly in line with that of the other winners of the past 50 years. Size does count with the Archibald and the sweet spot is almost exactly three metres square (although that didn’t stop Sam Leach striding to the top of the podium in 2010 with his teensy, weensy 60cm by 38cm portrait of comedian Tim Minchin.)

Winning the Archibald is also not a young person’s game. If you’re in your 20s or even early 30s the best advice is to wait a while before entering. The average winning age during the past 50 years is about 47. Whether that’s because it takes that long to get really good or just due to plain old ageism is anybody’s guess.

So, if you happen to be a 47-year-old bloke and can lay your hands on some oil paints, a three-metre canvas and a willing and well-known sitter who is also an artist, maybe your time has come. Oh, and you’ll also need talent. Lots of talent.