‘We are living in 2021, not the 18th century!’ GB Paralympian Olivia Breen who was told her briefs were ‘too short’ says other young female athletes have ‘burst into tears’ after having their outfits criticised

Two-time Team GB Paralympian Olivia Breen has today said female athletes shouldn’t be made to feel self-conscious of their competition outfits after she was criticised over the lengths of her briefs.

Breen, 24, who has cerebral palsy and is set to compete at the Paralympics in Tokyo next month, was approached by a female official after the long jump event at the English Championships in Bedford on Sunday and told her Adidas competition briefs were ‘too short’ and ‘inappropriate’.

Speaking about the incident on GMB from Ashby-de-la-Zouch, in Leicestershire, the athlete said she had received reports of similar incidents from other young female athletes. 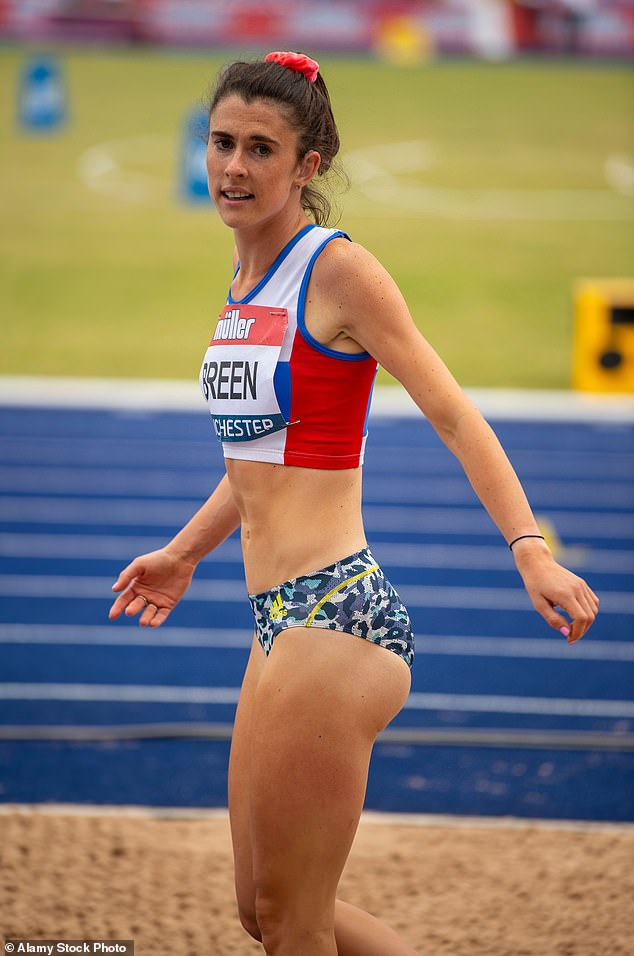 Breen, 24, who has cerebral palsy and is set to compete at the Paralympics in Tokyo next month, was approached by a female official after the long jump event at the English Championships in Bedford on Sunday and told her Adidas competition briefs were ‘too short’ and ‘inappropriate’. Pictured, Breen wearing the briefs at a different competition 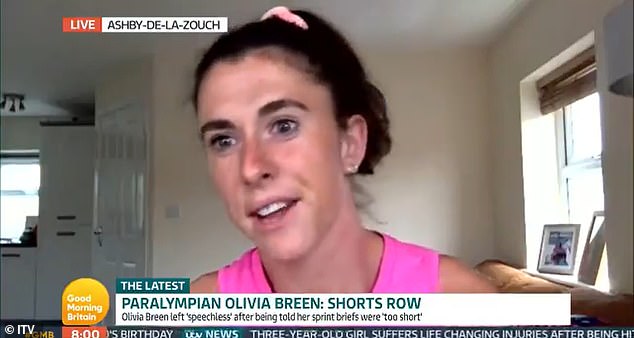 Speaking about the incident on GMB from Ashby-de-la-Zouch, in Leicestershire, the athlete said such comments attack an athlete’s self-confidence and revealed she had received messages from ‘young girls’ who have received similar treatment

She said: ‘To be told that, it made me feel really cross. We can’t be told things like that. I’ve had messages from young girls saying they’ve burst into tears about it. It’s that self-confidence and self-esteem and that could break them.

‘For me it made me feel really cross and upset and frustrated. We are living in 2021, not in the 18th century.’

Breen, who competes as a sprinter and in the long jump, explained all athletes have their attire checked by officials before the competition to check it adheres to the rules, such as wearing a club or national vest.

Rules on the UK Athletics website don’t specifically comment on the length of shorts or briefs but state: ‘In all events competitors must wear at least vest and shorts (or equivalent clothing) which are clean and so designed and worn as not to be objectionable, even if wet.’

Breen explained she had been wearing the same style of Adidas briefs for several years without complaint and was ‘gobsmacked’ when she was approached after the competition.

‘I just finished the competition. I was really happy, just having a chat with my teammate and the official came up to me and said: “Can I talk to you Olivia?” And I said: “Sure, what’s up”. 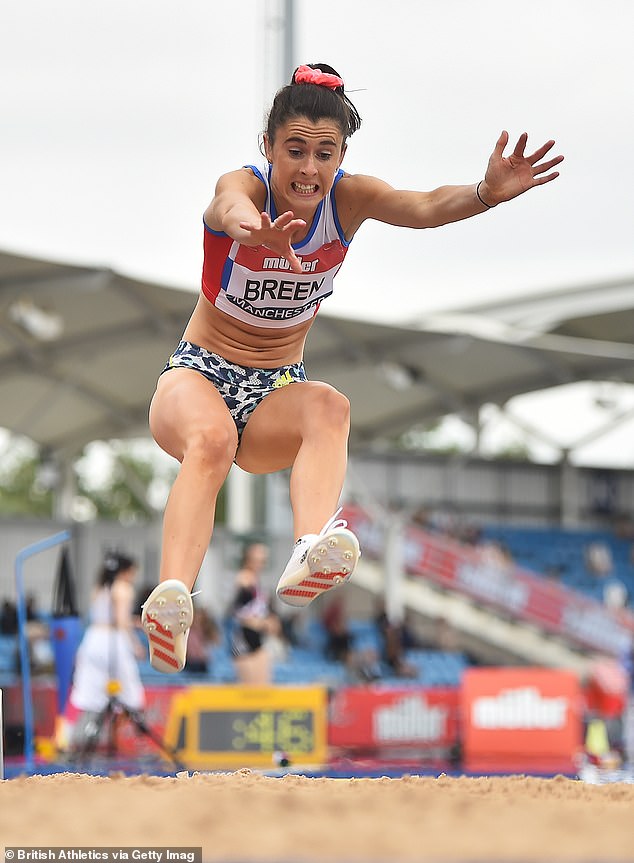 Breen wearing the same outfit in the long jump at the Muller British Athletics Championships in Manchester last month. She said she has worn the same style of brief for ‘many years’

‘And she said: “I think your briefs are too revealing and you should buy a pair of shorts”. And I was taken aback, I was gobsmacked.

‘My first reaction was “are you joking?” And she was like, “no, I think you should buy a pair of shorts”… I’ve been an athlete for nine years and I’ve never been told “that’s too revealing” or “that’s inappropriate”. It’s ridiculous.’

Olivia went on to explain that some male athletes competed with their tops off and were not told to cover up. She revealed: ‘No one said anything. I had a male athlete make the point, “I had my top off because it was so hot and no one told me to put it on.” It made me so cross, why did I have to go through what I went through?’

Breen first brought the issue to light on Sunday evening when she shared an Instagram post saying: ‘I am always grateful for the incredible volunteers who officiate at athletics events.

‘They do an amazing job and make it possible for us to compete. However, tonight I feel disappointed because just as I finished my long jump competition one of the female officials felt it necessary to inform me that my sprint briefs were too short and inappropriate. I was left speechless. 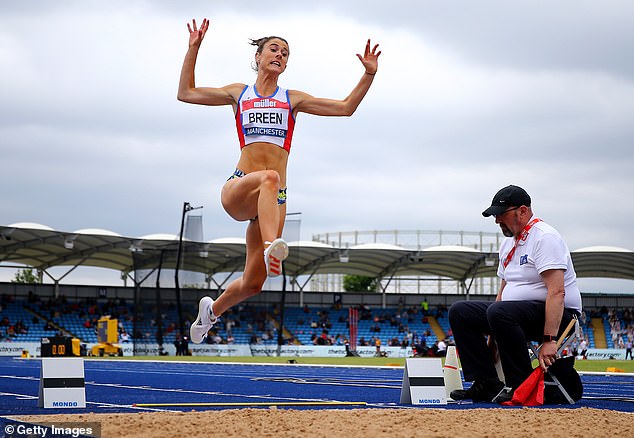 Olivia, pictured wearing the briefs at the Muller British Athletics Championships in Manchester last month, said female athletes should not be questioning how they look when competing

‘I have been wearing the same sprint style briefs for many years and they are specifically designed for competing in.

‘I will hopefully be wearing them in Tokyo. It made me question whether a male competitor would be similarly criticised.

‘I hope no other female athletes had similar issues. I recognise that there needs to be regulations and guidelines in relation to competition kit but women should not be made to feel self-conscious about what they are wearing when competing but should feel comfortable and at ease.’ 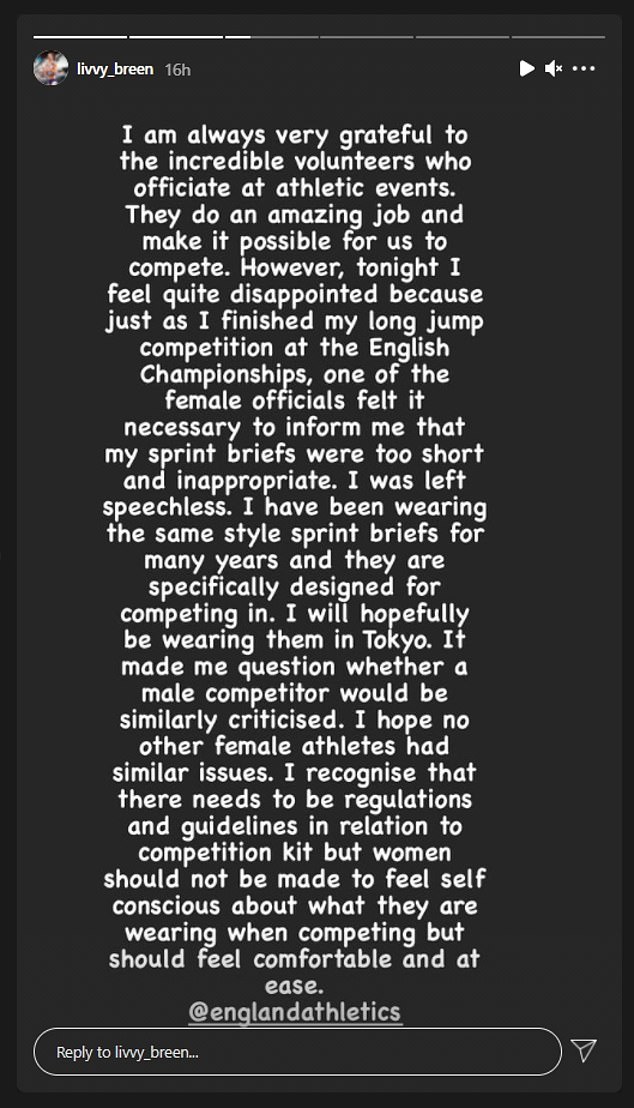 She failed to medal four years later in Rio, but went on to win gold in the long jump at the 2018 Commonwealth Games on the Gold Coast.

An England Athletics spokesperson said: ‘We are aware of the post and will be investigating as a matter of urgency.

‘The wellbeing of all participants in athletics is of the utmost importance and everyone should feel comfortable to compete and participate in the sport.’

An Adidas spokesperson said: ‘Olivia is an inspiration on and off the track. It’s disappointing to see her judged on anything but her athletic performance. We fully endorse her comments and hope they are taken onboard by the event organisers.’