Do YOU think childminders should let toddlers watch TV? Furious mother says it’s lazy and ‘wouldn’t happen’ to her 14-month-old daughter at nursery’ – but others say it’s ‘not a bootcamp’

A concerned parent has slammed a childminder for ‘sometimes’ giving children a ‘movie afternoon’, and said she’s considering not sending her own 14-month-old daughter as a result.

Taking to Mumsnet, the anonymous mother, from the UK, has questioned whether to send her 14-month-old toddler to the childminder – who looks after youngsters from 10 months to three years – after learning she ‘sometimes’ lets them watch films.

She went on to ask whether others agreed that a babysitter should ‘not be using the TV like that’ – and many were quick to take to the comments section to express their strong views.

‘Sometimes school has a movie afternoon too! It’s childminding, not boot camp,’ wrote one. But others agreed with the original poster, writing: ‘Screen time allocation is for use at home surely?’ 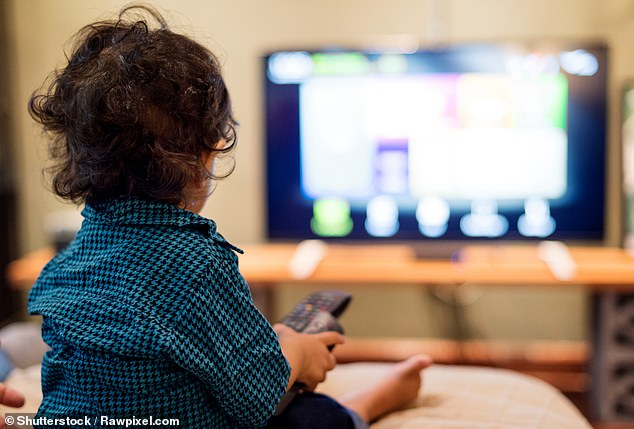 An anonymous mum, from the UK, has slammed a childminder for ‘sometimes’ giving children a ‘movie afternoon’ – and says ‘they wouldn’t do it in nursery.’ Pictured, stock image

The mother questioned whether to send her 14-month-old toddler to the childminder after learning she ‘sometimes’ lets them watch films. Pictured, the initial post

In the initial post, the woman went on to clarify that she’s not ‘anti telly’ – especially when it’s used for educational purposes.

‘If they were watching a bit of a programme about penguins or something because they’re learning about penguins, then cool,’ she wrote. ‘But to just put them in front of the telly for 2hrs when it supposed to be looking after them seems a bit c**p. They wouldn’t do this in a nursery or anything.’

However, several parents had a very different opinion and didn’t see any harm in a movie afternoon – with one even instructing her to ‘get a grip.’

‘If it’s every day, every afternoon then no, that wouldn’t be right but on occasion it’s fine,’ wrote one.’ And they DO do this sometimes in nurseries when they’re trying to tidy up after lunches etc., even if it’s only for 20 minutes. We’re in lockdown, things are different just now.

A second commented: ‘Oh get a grip. There’s a b***y pandemic and lockdown going on. There are no activities running for childminders to take their kids too and there’s only so many walks they can do.

Many took to the comments section and admitted they see no harm in a movie afternoon – with one adding ‘it’s childminding, not bootcamp’

‘She’s probably doing her best and whatever she is doing as long as the kids are well looked after and happy, what does it matter? My 18-month-old goes to nursery. I could care less if they put a film on as long she is OK.’

A third added: ‘I certainly wouldn’t be paying a professional to be offering this. Like you said – maybe if it was part of learning about something specific, but let’s be honest, this is definitely more for her than it is for the kids.’

Meanwhile, others jumped to the defense of the concerned mum and slammed the idea – especially because she would be paying for it.

Many agreed with the concerned mother, with one writing: ‘Two hours seems a bit much when you’re paying for it. How do you know the length?’ (pictured)

‘No you are right. Childminders are Ofsted regulated they are supposed to be following the early years curriculum,’ wrote one, while  second commented: ‘Two hours seems a bit much when you’re paying for it.’

A third added: ‘I think that’s too young to be watching telly, especially for so long. Also when people pay a CM they are paying for that to be non screen time – either educational or at least engaging.

Elsewhere, a fourth wrote:; ‘SIL childminder lets the children watch 20 mins of Peppa Pig at the end of the day which she doesn’t mind as it is a very long day 7:30 until 5:30pm.

‘I think anything longer than half an hour should be kept for Christmas or days when they’re poorly. Childminder should ask if it’s okay ideally so that parent can say no.’