Patricia Battin was a librarian who well knew the clutter and chaos of big institutional libraries that never threw anything away.

As she rose in her profession in the 1970s and ′80s, she became a champion of reformatting books and old newspapers, using microfilm, computers and the emerging internet to preserve material and make it accessible while creating more shelf space for new items.

In the 1980s, she led a national campaign to save millions of disintegrating books that were published between 1850 and 1950, persuading Congress to increase its funding for microfilming these so-called brittle books.

To many librarians, Ms. Battin, who died on April 22 at 89, was a pioneer and a visionary. Horrified that the printed word seemed to be crumbling to dust before her eyes, she helped lead the profession out of the dark ages and embraced the digital revolution.

To others, however, this revolution was misguided. It was, they said, stoked by hyperbole and had devastating consequences: the destruction of irreplaceable original documents.

Leading the charge was the acclaimed writer Nicholson Baker, who argued that printed works were not crumbling and that librarians were exaggerating the problem to feed the new technologies.

His polemical book “Double Fold: Libraries and the Assault on Paper” (2001) amounted to a declaration of war on reformatting, which at one time required the guillotining of book bindings to flatten the pages for the microfilm camera.

He aimed his arrows at all manner of respected institutions and individuals, including the librarians of Congress, the New York Public Library and, singling her out by name, Ms. Battin. From 1987 to 1994, she was president of the Commission on Preservation and Access (now the Council on Library and Information Resources), a private nonprofit group dedicated to preserving published materials and archives in all formats.

Libraries and other institutions continue to wrestle with how to maintain and store their growing collections. And sometimes they throw out originals.

Mr. Baker’s book, which portrayed librarians as running amok, caused a sensation. (“The Great Book Massacre” read the headline in The New York Review of Books; “Don’t Burn Books! Burn Librarians!” screamed Searcher magazine.) Numerous critics disputed his premise, saying that Mr. Baker had distorted the facts, had little understanding of how libraries actually functioned, and did not appreciate that not everything was worth saving.

“The book,” she wrote in 1989, “is a marvelous technology for use, but it is a cumbersome dissemination format and an increasingly frail storage format in this age of rapid telecommunications.”

Still, she believed in the printed word. She predicted early on that it would not disappear but rather become one of several formats by which scholars would communicate.

A book lover as a girl, she had risen from library intern to become one of the most powerful players in information technology. She devoted her career to making libraries relevant in an increasingly high-tech world. 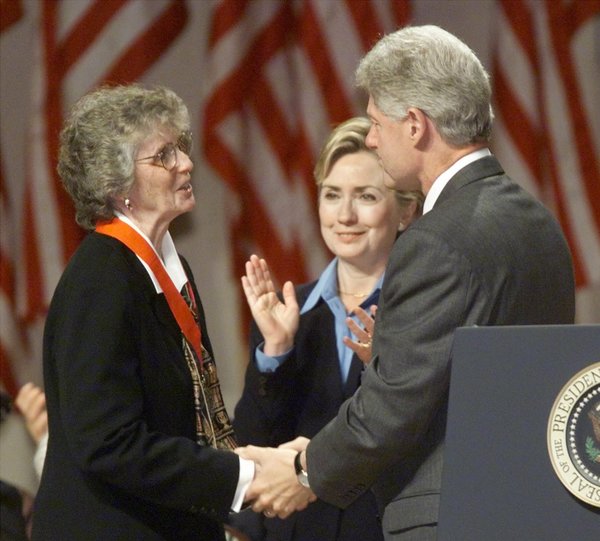 This included responsibility for Columbia’s computing center, which put her at the nexus of all scholarly information in the campus’s 26 libraries, regardless of how it was stored or disseminated. With the rise of computers, her profession was upended.

“The research library world is in turmoil,” she wrote in a library publication in 1983. “Every principle and assumption upon which we have built our libraries for the past hundred years is being questioned today.”

Patricia Meyer was born on June 2, 1929, in Gettysburg, Pa., to Emanuel and Josephine (Lehman) Meyer. Her father was a businessman, her mother a homemaker.

She grew up in Biglerville, Pa., just north of Gettysburg, and moved to Washington with her family when her father went to work for the Department of Agriculture during the Depression. She attended Sidwell Friends School in Washington and graduated from Swarthmore College in Pennsylvania in 1951 with a bachelor’s degree in English.

She began working as a library intern at the State University of New York at Binghamton while attending classes at Syracuse University, where she earned a master’s degree in library and information science in 1967. Her marriage to William Thomas Battin, a professor at Binghamton, ended in divorce in 1974.

Ms. Battin died of heart-related complications at her home in a senior community in Mitchellville, Md., her son, Thomas M. Battin, said. Her death was not widely reported at the time.

In addition to her son, she is survived by her daughters, Laura Battin Geradine and Joanna Brigham; her brother, Nicholas Meyer; and four grandchildren.

When Ms. Battin was the overseer of library services and information technology at Columbia in the pre-internet era, her immediate goal was to create what at the time was a radical concept — a “one-stop information shopping center” at the university.

Among her projects was working with peer institutions to help establish the Research Libraries Group, which allowed universities and other research institutions to share materials, so that not every library had to keep copies of the same obscure journals.

She moved to Washington to head the newly formed Commission on Preservation and Access in 1987. She warned at the time that perhaps a quarter of the world’s great collections were brittle, with some volumes already turning to dust.

The commission encouraged publishers to print books on longer-lasting alkaline paper and developed a national strategy for research libraries to work together to save their collections from the “slow fires” of acidic paper.

For her work, she won the Librarian of the Year award in 1990 from the Association of College and Research Libraries.

She retired from the commission in 1994 and went on to lead a three-year “virtual library project” at Emory University. In 1999 President Bill Clinton awarded her the National Humanities Medal.

At the time, Emory’s chancellor, Billy E. Frye, said of Ms. Battin, “She will stand out as one of the key figures of the last half of the 20th century because of the leadership she has brought to the area of information management in the country.”

DURING pregnancy, women take paracetamol for a myriad of reasons. But experts have now revealed that popping the pain killers could stop your child sleeping properly. Medics in the US said this has particularly been found in children aged three-years-old. Writing in…