Dr Finkel, whose five years as chief science adviser to the federal government were dominated by energy policy, warned against listening to those who wanted a slow transition to a low-emissions economy but said it was unrealistic to think Australia could immediately reverse course. 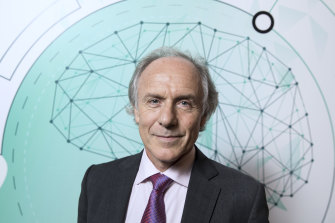 Ambition was evident in Dr Finkel’s 2017 review of federal energy policy, which recommended a clean energy target requiring a set percentage of power to be generated from low-emission sources. However, this was ignored in the Turnbull government’s National Energy Guarantee, which ultimately failed due to opposition from the Coalition backbench.

Experts including Dr Finkel agree technology alone won’t be able to drive the transition needed for Australia and the world to hit net zero by 2050. Targets are also required to drive change, they say.

“The reality is the transition to new technologies can’t happen in a policy vacuum. Policy, enabling markets and community acceptance are critical,” Dr Finkel writes in the latest Quarterly Essay released on Monday.

“My focus is the technology itself. Those issues absolutely have to be dealt with by the politicians and I’ll leave it to them.“

Dr Finkel handed the chief scientist baton to former CSIRO top scientist Cathy Foley in January. He was appointed a special adviser to the Morrison government on low-emissions technology in March and has since been spruiking Australia’s technology road map to international energy ministers.

In his essay, Getting to zero – Australia’s Energy Transition, Dr Finkel noted the “increasing action and ambition at state and federal levels” as well as federal Energy Minister Angus Taylor’s vision for Australia to become a global leader in low-emissions technology.

“Again, no trade-off, no dichotomy. Prosperity and low emissions. It is my firm belief we can have both,” he said.

The majority of his essay is devoted to a discussion of low-emissions technologies such as hydrogen, grid-scale batteries, electric vehicles as well as agriculture and other industrial processes.

Dr Finkel cautioned against listening to the “slow transition camp”.

“Their sluggishness is such that if they prevail globally, we will be doomed to a dangerously warmer planet,” he said, warning Australia would suffer economically through trade sanctions if it missed the clean technology transition.

But he said it was “simply unrealistic to think that with political will, we can immediately reverse course” from the carbon-dominated economy.

“Those in the fast transition camp advocate the immediate shutdown of coal despite the economic calamity this would cause and deny the use of natural gas to support the fastest possible massive adoption of solar and wind electricity,” Dr Finkel said.

This assessment is unlikely to quell Dr Finkel’s critics in the science community, including 25 eminent Australians who last year publicly criticised his support for gas as a transition fuel to net-zero energy supply.

Replying to his critics, Dr Finkel said gas was needed to fuel fast-start gas plants for “dispatchable” energy, which backs up, or firms, the supply of intermittent energy supplied by wind and solar farms.

“In the past, I’ve referred to the importance of gas for the energy transition. I had in mind the importance of firming for solar and wind. I look back now as some people interpreted my statements as ‘gas to replace coal’,” he said.

“As a firming technology, gas doesn’t run for that many hours per year. It’s a good emissions outcome so we can bring more solar and wind to the market.”

Dr Finkel has previously said he doesn’t expect the volume of gas used for energy to grow significantly from its current level of about 8 per cent.