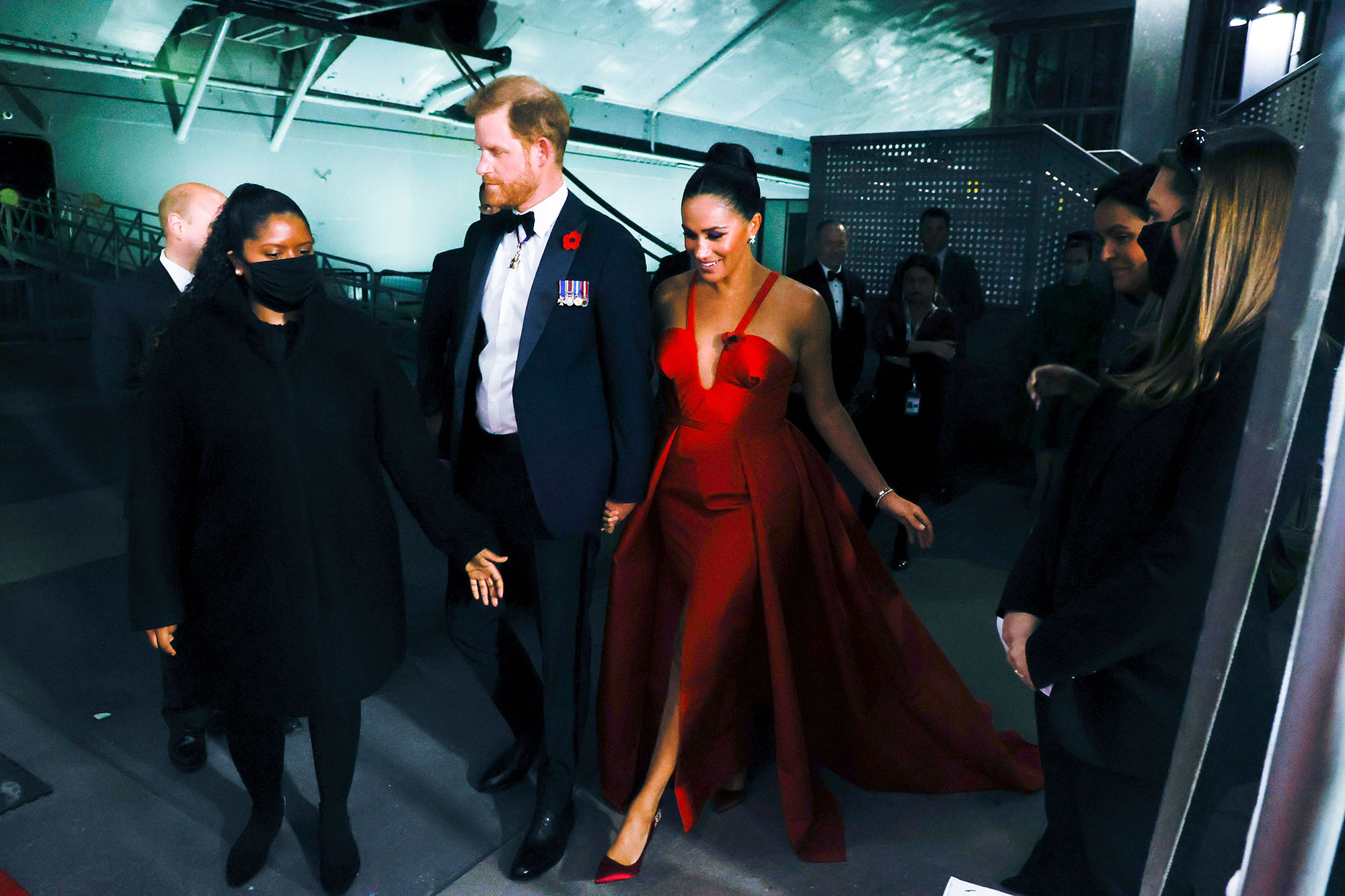 Happy couple! Meghan Markle was all smiles as she supported her husband, Prince Harry, at the Salute to Freedom Gala in New York City.

The twosome walked hand in hand on the red carpet outside of the Intrepid Sea, Air & Space Museum on Wednesday, November 10, ahead of the festivities.

“I’m always proud of him,” Meghan, 40, told reporters of Harry, 37, before heading into the event.

Meghan wore a red, V-neck gown and matching red heels. She donned a poppy pin on the left side of the dress as she posed for photos alongside her husband. The poppy is a symbol of remembrance for veterans and those who served in the U.K.

The prince, who is presenting Intrepid Valor Awards to five service members, veterans and military families at the gala, wore a navy suit, matching bowtie and a poppy on his lapel next to his medals of honor.

The duo stopped on the carpet to chat with some of the night’s recipients, according to royal reporter Omid Scobie.

The Duke of Sussex served in the U.K. army for 10 years, rising to the rank of captain before his 2015 retirement. He was deployed to Afghanistan for two tours during his time in the service.

Earlier this week, Harry spoke out against people who reacted negatively to his and Meghan’s departure from the U.K. and their subsequent relocation to the U.S. in 2020.

“Maybe people know this and maybe they don’t, but the term ‘Megxit’ was or is a misogynistic term, and it was created by a troll, amplified by royal correspondents, and it grew and grew and grew into mainstream media,” Harry said during a panel at Wired’s Re:Wired Conference on Tuesday, November 9, according to Vanity Fair. “But it began with a troll.”

Meghan Markle and Prince Harry’s Charity Work Through the Years

The former pilot explained that the term is harmful and like many things online, its spread comes from misinformation. Harry addressed the hate speech that his wife has experienced since marrying him in May 2018, pointing to the similar attacks his late mother, Princess Diana, faced.

“I know the story all too well. I lost my mother to this self-manufactured rabidness, and I don’t want to lose the mother of my children to the same thing,” the royal continued, referencing his and Meghan’s two children: son Archie, 2, and daughter Lilibet, 5 months.

The Invictus Games founder explained that he and the Bench author had become targets of a coordinated social media campaign, revealing that a recent Bot Sentinel study showed that more than 70 percent of the “hate speech” about the Suits alum was “driven by fewer than 50 accounts.”