China’s deputy ambassador in Canberra insists Australian journalists are welcome in China, saying he was sympathetic to the case of two foreign correspondents who were forced to leave the country last year.

Wang Xining claimed it was incorrect to say that China no longer welcomed foreign journalists but said they needed to present “the true image of China”. 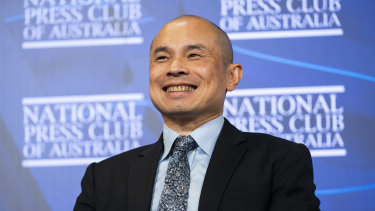 Wang Xining, deputy head of mission of the Chinese embassy in Canberra.Credit:Rohan Thomson

The last two journalists working in China for Australian media outlets – the ABC’s Bill Birtles and The Australian Financial Review’s Mike Smith – hurriedly left the country last year after a diplomatic stand-off in which police demanded interviews with both reporters.

The two journalists left days after the Chinese government confirmed the arrest of Cheng Lei, an Australian journalist working for Chinese state media.

Appearing at the National Press Club alongside China’s deputy head of mission, Mr Smith responded to Mr Wang by saying it was not a good situation “when your employer and government doesn’t feel like you’re safe, and have to leave”.

“I don’t think it does China any favours,” he said. “All the reporting on China is from outside China, and obviously that has a certain slant and, I mean, some of the best stories we did were out on the road, talking to ordinary people in China and getting those nuances and, you know, I think that’s the sort of one of the big tragedies out of this.”

Mr Wang said he would continue to discuss the situation with Mr Smith and insisted it was not the Chinese government’s intention for the two reporters to leave.

“I’m quite sympathetic with Michael and Bill because it was not the embassy, my embassy, or … any of our Chinese authorities who advised them to leave,” he said.

“We never discriminate against any journalists, but we hope foreign journalists in China will present the true image of China. It’s very multi-dimensional, it’s very sophisticated.”

Mr Wang said Ms Cheng, who is still detained in China, was apprehended because she was “suspected of violating the security law of China and all these cases will be handled according to Chinese legal procedure”.

Relations between Australia and China deteriorated to their worst levels in decades last year with China imposing more than $20 billion of trade strikes on Australian exports and its senior government officials have refused to return the phone calls of Australian ministers.

Canberra has angered Beijing on a number of fronts including pushing for an independent inquiry into the COVID-19 pandemic and banning Chinese company Huawei from Australia’s 5G network.

Mr Wang said he didn’t see any reason why the relationship between the two governments couldn’t improve, but suggested Canberra would need to revisit its decision to ban Huawei.

“We should all observe the principle and guidelines … to provide a fair and just and non-discriminatory business environment to our businesses,” he said.

“And certainly we should value our friendship between our peoples and no obstacle should be laid intentionally to obstruct people-to-people exchange programs.

“It is very simple – as long as the Australian side will be able to do that, I don’t see any obstacle for the resumption of a normal state of our relationship.”