A Royal Australian Air Force plane has rescued almost 100 Afghans from Pakistan who were then taken to quarantine in Darwin before being resettled in Australia.

Hundreds of thousands of Afghans have fled into Pakistan in recent weeks after the Taliban’s takeover of Afghanistan. This includes hundreds of Afghans who have been granted visas by Australia, government sources confirmed. 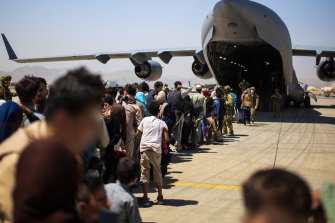 A RAAF flight picking up Afghans in Kabul last month.Credit:ADF

A RAAF flight picked up just over 90 Afghans in Islamabad on Tuesday about 5pm local time and took them to Australia’s military base in Dubai. They were then flown on a Qantas flight to Darwin where they have entered their 14-day quarantine period.

One Afghan on board said it was a relief to be rescued after weeks of trying to get out of Afghanistan.

“Australia has different meaning for me – the meaning that my family will enjoy a war-free and peaceful environment,” the man said.

“I grew up in war and my children will not anymore. The nice people and warm welcome have impressed [me]. My children will no longer report to me about hearing a bomb explosion and gun fires.”

The Qantas flight out of Dubai is the last scheduled evacuation out of the military base, but there could be flights to Pakistan if needed, government sources told The Age and The Sydney Morning Herald.

In nine days and without an embassy on the ground, Australia managed to evacuate more than 4100 people following the fall of Kabul, ending its rescue operations hours before a terror attack killed 13 American soldiers and some 169 Afghan civilians.

With Kabul’s airport still closed and the allied evacuation effort over, it is impossible for Afghans to fly out of their own country forcing many to flee to other countries.

Defence Force chief Angus Campbell this week said he was surprised by the speed of the Taliban’s takeover of Afghanistan and suggested the fall of the capital Kabul was accelerated by some “interesting” decisions by the Afghan National Army and the hasty departure of President Ashraf Ghani.

The Taliban this week announced an all-male interim government for Afghanistan stacked with veterans of their hard-line rule from the 1990s and the 20-year battle against the US-led coalition. This included the appointment of Sirajuddin Haqqani, who is on the FBI’s most-wanted list with a $US5 million bounty on his head, as Interior Minister.

Australia is likely to resettle more than 12,000 Afghan refugees over the coming years as part of its established humanitarian program, with Prime Minister Scott Morrison promising Federal Parliament last month that “thousands upon thousands” who had “courageously” stood with Australian forces over the 20 years would be given safe haven.

Women, children and religious minorities are likely to be prioritised but, unlike the additional one-off intake of Syrians, all positions will be under Australia’s existing humanitarian program cap of 13,750 people a year.

A senior government source said the government would match its 2015 promise to resettle 12,000 Syrian refugees over a number of years and probably go some way towards the promises by Britain and Canada to take 20,000 over five years.

Mr Morrison has so far only committed to resettling “more than” 3000 Afghans this financial year.