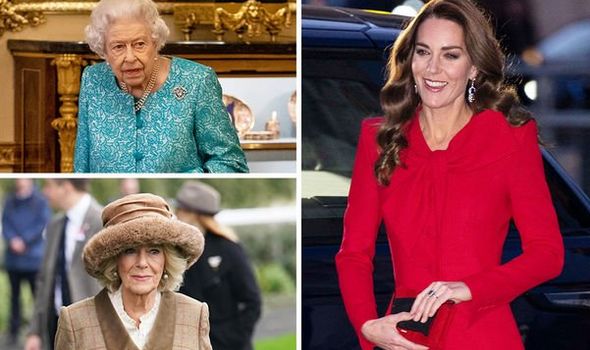 Over the past few weeks, the Royal Family has been out in force meeting members of the public and making public appearnaces on behalf of the Queen. The monarch herself has also been leading by example, hosting receptions at Windsor Castle. Every time the Queen is photographed holding a reception, her body language is poised and elegance. So do any of the other royal females follow suit? Express.co.uk spoke to body language expert Judi James about Camilla Parker Bowles style in public and how it is different to Kate Middleton’s.

Judi said: “The Queen’s body language is as unique as her role and her status.

“Classed as ‘actively high status’ and diffused with and determined by her own protocol rules, it is a tradition in itself.

“Created in part from the way she ascended to the throne earlier than expected and, as a young and rather petite female in what was a very patriarchal society where women were still expected to give up their jobs once they were married, she would have found herself needing to project signals of extreme power, authority, regality and confidence in a very older-male-dominated culture.”

She added: “She uses space to help create her royal aura and her deliberate trait of dressing in bold, block colours to stand out would add to this idea of specialness.

“But the Queen’s body language is also a very powerful tool when it comes to creating her regal status.

“The Queen is almost unique in her firm, personal ‘rule’ to not mirror other people.”

Judi continued: “While the rest of us (and the rest of the royals) can be seen using non-verbal mimicry or postural echo to create bonds of similarity and even empathy, the Queen never changes her non-verbal statement in terms of looking and acting like a Queen.

“Many of her rituals are almost exclusive to her, like the royal wave and the use of fingertips only for a handshake.

“Her regal smile can look indestructible and it is a one-signal symmetric social smile rather than a range of shifting eye and mouth movements to show different levels of engagement or happiness.”

In many photographs, there is a great deal of space between the Queen and whoeever she is meeting or talking to.

Judi explained: “The Queen’s sense of ‘royal distancing’ means she can appear to view the world as a tourist rather than as one of any group.

“Her visits will involve greeting rituals but she tends to walk, look and smile rather than engage visually.

“It’s a testament to her confidence and her verbal and non-verbal skills that she still manages to appear warm and to put people at their ease when they meet her.”

As for Camilla, Judi said: “With a perilous route into the Royal Family at the highest level, Camilla’s body language signals have always been in almost direct contrast to the Queen’s and would be defined as ‘actively self-effacing and low-key’.

“The Queen will always command attention and signal levels of comfort in her very central role.

“Camilla’s body language signals tend to hint at a subliminal desire to hide and to keep away from the spotlight.”

She added: “When we see her at her most comfortable it is in more private poses with Charles, but in public she will wear a rather complex, upturned smile where the corners of the mouth tend to be pulled down rather than up and she seems to prefer a less remote style of posing, getting up close to her hosts and almost pointing the spotlight onto them and away from herself where possible.

“Whereas the Queen and Kate will tend to keep their hands held low to their torsos to allow themselves to be as visible and possible, Camilla will often create barriers to ‘hide’ behind, like her use here of the small bouquet of flowers that she holds chest and nearly face high as she chats to her hosts.

“Her smile might be non-regal but it projects high signals of warmth, with crinkling around the eyes and a pulling of the lips to suggest a desire for empathy and even sympathy.

“Camilla might not stand out at a royal gathering but she seems to use her body language to make her mark on more of a one-to-one basis, where she can look friendly and approachable.”

So how does the Duchess of Cambridge appear in public?

Judi revealed: “Kate’s body language signals manage to blend a very elegant air of regality, specialness and status with a more respectful approach that at time entails some deliberate mirroring and even status-lowering to help bond with the public.

“The Queen’s charisma has the effect of making her admired but also to make people nervous and lacking in confidence about meeting her, but Kate’s more flexible and often respectful approach will tend to make her appear much less daunting but without any erosion of her perceived status.

“While The Queen and Camilla appear to adhere to their own personal style, Kate is much more flexible and modern, moving between ‘regal’ and ‘down-to-earth/natural’ depending on what is needed at any time.”

She continued: “She will also use ‘catalyst’ body language signals to steer other royals, like the touch and positioning rituals she used at the Duke of Edinburgh’s funeral to support Charles in his grief and to get William and Harry to engage, albeit briefly.

“Kate’s mirroring skills are focused primarily on her husband William, with the couple often appearing like body language ‘twins’ when they appear in public.

“When she is communicating with the public directly though, Kate will use a variety of techniques to help create bonding but she will also add enough traditional touches of regality to create an aura of ‘specialness’ that is more similar to the Queen’s,” Judi concluded.