In this EXCLUSIVE sneak peek at the March 14 episode of ‘RHOA’, Drew slams LaToya for trying to help Kenya expose the person (or persons) who allegedly had sex with the stripper.

We’ve got an EXCLUSIVE first look at this week’s all-new episode of The Real Housewives of Atlanta, and based on just this one-minute clip, we think it’s going to be oh so juicy! Especially because Drew Sidora and LaToya Ali get into such a heated argument that they nearly come to blows with each other.

It all starts when the ladies sit down with Porsha Williams and Marlo Hampton to go over Kenya Moore‘s latest antics. And while doing so, they all accuse LaToya of “jumping on” Kenya’s investigation bandwagon and trying to help her uncover who allegedly had sex with the stripper at Cynthia Bailey‘s bachelorette party. But LaToya doesn’t want to entertain them, so she asks them to “change the subject”.

LaToya says she doesn’t care who had sex with the stripper, but Drew claps back: “You do care. Because at dinner, you said, ‘Drew was being inappropriate with the stripper.’” A flashback then shows LaToya accusing Drew — a “married woman” — of being all up on the stripper’s private parts. Then, in present time, LaToya yells, “You said I don’t honor marriage, and it’s like — do you honor marriage [if you’re] bumping and grinding on [the] f***ing [stripper]?”

Drew is taken aback by LaToya’s accusation, but after a few hot seconds, she quickly regroups and hits back. “That’s why your husband is trying to cancel your ass. So let’s not go there. I have a perfect marriage, a perfect hairline, bitch, and three perfect children. Alright? LaToya forever? No. LaToya never never ever, bitch.” We’re not sure what that truly means, but we love it. 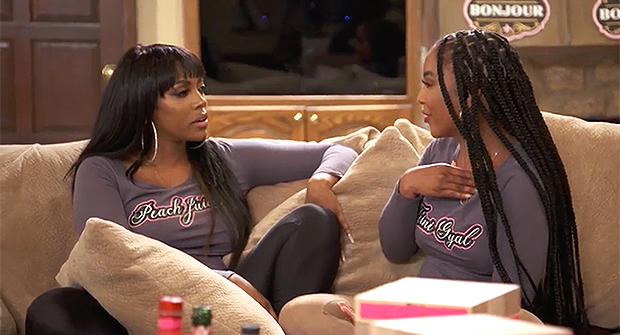 Later in the clip, they yell more nasty things at each other before getting up on their feet and approaching each other. It’s not yet clear if they end up physically fighting, but things look super tense!

Want more drama? New episodes of The Real Housewives of Atlanta, including this one, air Sundays at 8pm on Bravo.