Home » Lifestyle » RICHARD LITTLEJOHN: This self-indulgent carnival of madness has to end

RICHARD LITTLEJOHN: Legitimate protest is one thing, but this self-indulgent carnival of madness has to end. Memo to new Met chief: Just stop pussyfooting around

Legitimate protest is one thing. But this self-indulgent carnival of madness has to end.’ I could have written that this week, after the police gave Just Stop Oil lunatics carte blanche to bring London streets to a standstill.

But, actually, I wrote it 13 months ago, the day after eco-mentalists staged a sit-in on the M25. It took several hours of tortuous negotiation before police finally removed them. To be fair to the Old Bill, it was the first time they’d had to deal with a bunch of maniacs risking life and limb by plonking themselves down in the fast lane of our busiest motorway.

Since then though, they’ve had plenty of opportunities to take stock and react to remove those taking part in similar disruptive action. Yet every time they flunked it. On one occasion, the officer in charge was overheard asking these anarchists if there was anything she could get them — a nice cuppa tea, perhaps? After that incident caused widespread public outrage, not least among the thousands of drivers caught up in the mayhem, we might have expected the police to respond to public fury by getting tough with these self-appointed, save-the-planet nutcases. 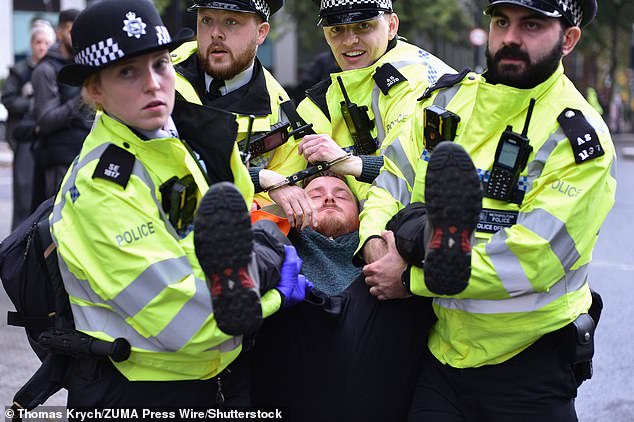 Legitimate protest is one thing. But this self-indulgent carnival of madness has to end.’ I could have written that this week, after the police gave Just Stop Oil lunatics carte blanche to bring London streets to a standstill

No such luck. This week, police stood back and watched for hours as the same gang of fanatics repeatedly blocked roads, preventing fire engines and ambulances responding to emergency calls — not to mention causing the maximum possible inconvenience to law-abiding citizens simply trying to go about their business.

It all kicked off in The Mall, outside Buckingham Palace.

The cops were there in minutes, but instead of dragging the demonstrators to the side of the road, they started diverting traffic. Same story elsewhere. Eventually, they did make some arrests, but only after specialist ‘liaison officers’ had been brought in to ask if they were sitting comfortably.

On Wednesday, the new Met Commissioner Mark Rowley tried to pretend that his officers didn’t have the legal powers to move the demonstrators, since they weren’t causing ‘serious disruption’.

What would you call deliberately causing gridlock in London, if not serious disruption? And since Rowley joined the police in 1987, one presumes he’s heard of the Public Order Act, which makes it an offence to behave in a way likely to cause a breach of the peace.

Given that angry motorists were climbing out of their vehicles and confronting the Just Stop Oil mob, and would cheerfully have seen them manhandled on to the pavement and clubbed like baby seals, surely that constitutes a breach of the peace.

Especially as Met officers recently threatened to arrest an anti-monarchy demonstrator who held up a placard reading ‘Not My King’, on the grounds that it could upset royalists and provoke them to violence. Is Rowley seriously trying to suggest that had the eco-nuts blocked the Mall during the Queen’s funeral, his officers would have let them stay there all day while the cortege was re-routed? 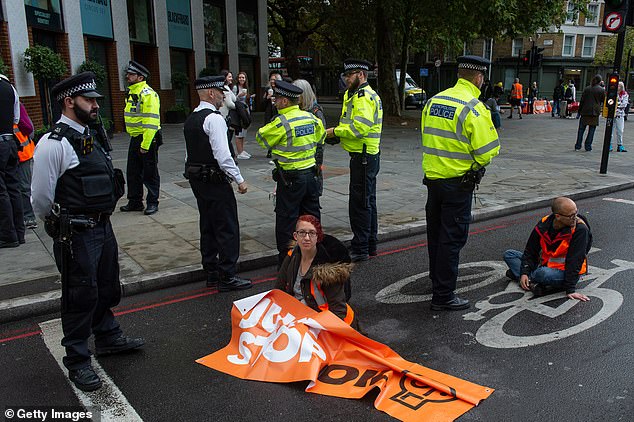 But, actually, I wrote it 13 months ago, the day after eco-mentalists staged a sit-in on the M25. It took several hours of tortuous negotiation before police finally removed them

What do you think?

Rowley took over in September shortly before the Queen’s death. But her funeral wasn’t his first big test, as some have claimed. Preparations for that had been going on for years, if not decades.

No, his real first big test was this week, when a handful of anarchists decided to bring chaos to millions of Londoners. And he failed miserably. It gives me no pleasure to write this. I’ve never met Rowley, but people whose opinion I respect rate him highly.

He seemed like the right man to turn the Met round after the disastrous tenures of Bernard Hyphen-Howe and Dick of Dock Green.

Perhaps he still is. It’s early days. And at least he spared us from Commissioner Neil Basu, best friend of the late George Floyd and someone who thinks the fastest-growing terror threat to Britain comes from the ‘far-Right’.

Rowley has made some encouraging noises, such as promising his officers will investigate every single burglary in future.

But why should we believe him when he can’t even be bothered to keep the streets of our capital city open in the face of a deranged protest by a tiny number of tree-hugging headbangers?

Policing in Britain is in crisis. Specialist units such as the anti-terror squad and the team which has just recorded some spectacular success against County Lines gangsters do a fantastic job. So do those brave coppers who put their lives on the line to keep us safe.

It’s everyday, routine keeping the peace, patrolling the streets and preventing crime which has been abandoned. I know it’s not Rowley’s bailiwick, but when knifemen struck at 9.30am in the City of London — the world’s financial powerhouse — there wasn’t a policeman in sight.

It was left to members of the public to ‘take the law into their own hands’ and tackle the criminals — just as van drivers and cabbies have been forced to confront Just Stop Oil because the police refuse to do so.

Those coppers who stood and watched the eco-loons this week are not personally to blame. It is the officer class, brainwashed by the Left-wing freemasonry Common Purpose, who are responsible for the indulgent attitude towards everything from ‘climate change’ activists to rampant drug use.

Since the first XR road block 13 months ago, I’ve often asked if the police — and courts — would take such a softly, softly approach towards, say, Millwall supporters angry at a home defeat lying down in the Old Kent Road, or Ukip blocking a motorway to protest against illegal immigration? 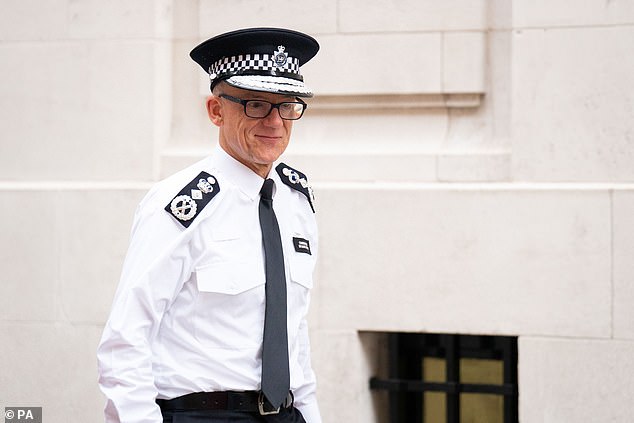 Rowley took over in September shortly before the Queen’s death. But her funeral wasn’t his first big test, as some have claimed

We’ve seen service station petrol pumps vandalised, print works blockaded, bridges closed, airports and public transport disrupted by XR and its spin-offs. Yet every time, they’ve been allowed to get away with it.

None of this is legitimate protest, with any tangible goal. It’s Fantasy Island anarchy. These selfish, privileged, overgrown children with obvious ‘mental health issues’ are waging war against civil society, against working people, against the weak and vulnerable they claim to champion.

How long before someone dies after a stroke victim is stopped from reaching hospital?

Mark Rowley says he wants to restore trust in the police. He could begin by putting a stop to this carnival of madness. Right now. Otherwise more angry citizens will start ‘taking the law into their own hands’ and there will be blood on the streets.

Yesterday, cops descended quickly on another Just Stop Oil sit-down in South London and handcuffed most of those involved. They made 20 arrests.

Maybe the message is finally getting through. Or else they just wanted to beat the Millwall supporters to it . . .

A humanoid robot called Ai-Da gave evidence to a House of Lords committee on Wednesday. Meanwhile, in the Commons, Liz Truss and Keir Starmer were going head to head at PMQs, with little sign of intelligent life. Both of them repeat the same robotic slogans over and over again.

Truss, too, looks and sounds as if she was modelled on one of the female cyborgs in the 2004 remake of the Stepford Wives. If the Maybot was the prototype, Fizzie Lizzie must be version 2.0. Now, though, it appears she may be about to self-destruct. Her circuit’s dead, there’s something wrong . . .

Meanwhile, in the Commons, Liz Truss and Keir Starmer were going head to head at PMQs, with little sign of intelligent life

The NHS Covid booster information leaflet comes in 29 languages including, ominously, Russian. Do they know something we don’t?

Renewable energy firms are to have their profits capped after demand for wind and solar power soared because of looming gas shortages. Not so much a windfall tax, more of a windmill tax.

No wonder people are stocking up on candles because of possible power cuts. It looks as if we will have to rely on candles and wind this winter. Perhaps Elton John could write a song about it. 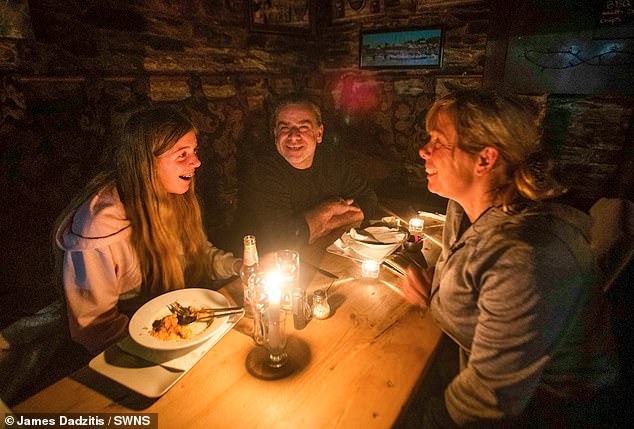 No wonder people are stocking up on candles because of possible power cuts. It looks as if we will have to rely on candles and wind this winter. Perhaps Elton John could write a song about it

It’s not just decay, this is M&S decay

First it was the libraries, then the banks, the police stations, the post offices, the butchers, the bakers and even John Lewis.

The traditional Great British High Street has been hollowed out by ‘progress’, Covid and the internet. Now we learn Marks & Spencer is to close a quarter of its ‘lower productivity’ stores. Soon all that will be left of our town centres, apart from tumbleweed, will be charity shops and fried chicken joints. When M&S pulls out, you know the ravens really have left the Tower.