‘He’s leading his people already!’ Royal fans left swooning over ‘adorable’ clip of Prince George with Princess Charlotte and Prince Louis as they clap for NHS staff and volunteers

Royal fans have been left swooning after the Duke and Duchess of Cambridge shared an adorable clip of their children applauding the NHS.

Prince George, six, lead his two younger siblings Princess Charlotte, five, and Prince Louis, who turns two next month, in a loud round of applause in a short clip shared on Prince William and Kate Middleton’s Instagram page.

The trio joined people from around the country as they took to their windows to show their appreciation for the efforts produced by the key workers, NHS and volunteers working during the coronavirus pandemic.

Many of those who watched the clip were charmed by the ‘adorable’ children as the Cambridges clapped and laughed during the video, with one commeting: ‘Love to see Prince George leading his people already.’ 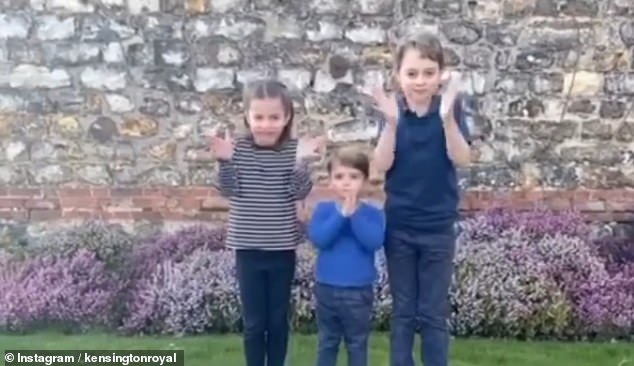 Royal fans were left swooning over the clip of Prince George, six, Princess Charlotte, five and Prince Louis, who could be seen applauding warmly in a short video shared on Prince William and Kate Middleton’s Instagram page (pictured)

The Instagram post read: ‘To all the doctors, nurses, carers, GPs, pharmacists, volunteers and other NHS staff working tirelessly to help those affected by covid19: thank you.’

In the adorable video, the three Cambridge children could be seen standing in a garden while applauding loudly.

While Prince George lead the applause, Princess Charlotte could be seen offering a shy smile.

Meanwhile Prince Louis appeared to gaze up at his elder siblings as he joined their clapping tribute.

Social media users were left swooning by the adorable clip, with one commenting ‘they’re all so big’

The trio are currently living with their parents at the family’s Norfolk home, Amner Hall, where Prince George and Charlotte are being homeschooled.

Royal fans loved the video and gushed over the three children as they smiled and chuckled at the camera.

‘Oh, so sweet! Can’t get over how much little Louis in particular has grown. Beautiful little family,’ said another. 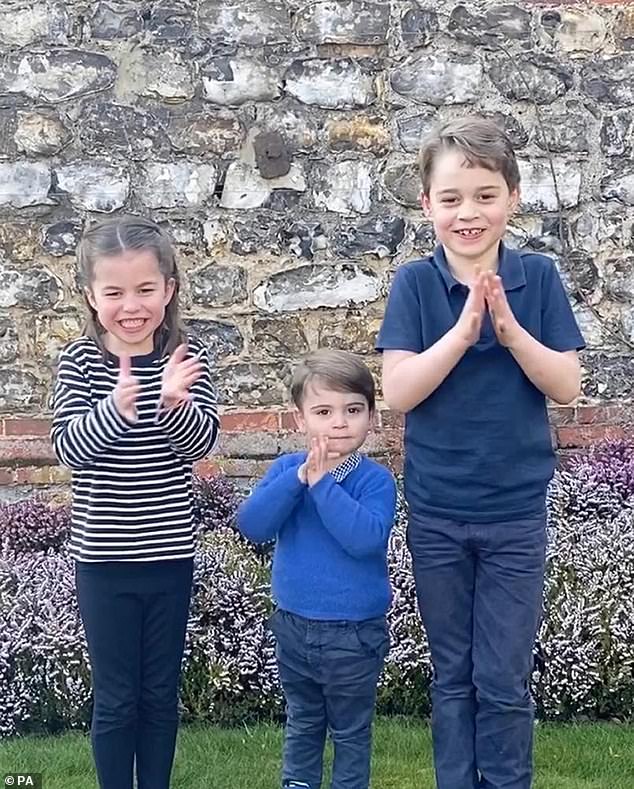 Many royal fans took to social media to gush over the adorable video, which was shared by Kensington Royal earlier today

‘Thats the best thing I’ve seen all day,’ said another.

‘Look at them, my heart,’ gushed another excited fan.

The trio were among hundreds across the nation who  flocked to their doorways, balconies, gardens and windows to give a heartwarming round of applause and lit fireworks from 8pm as the country came together. 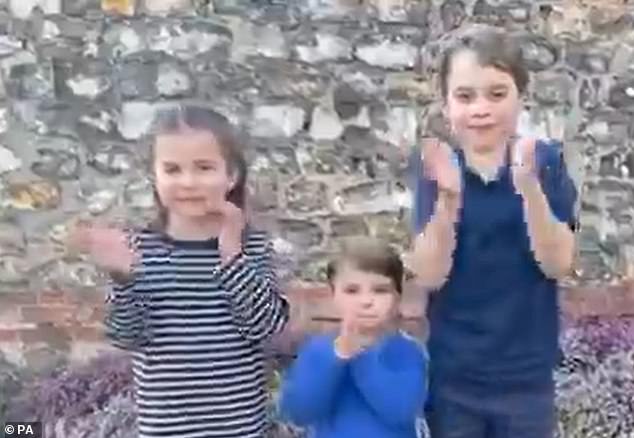 The trio could be seen applauding loudly in the video, which was shared to the Kensington Royal Instagram account this evening

The London Eye, the Wembley Arch, the Royal Albert Hall, the Principality Stadium and Lincoln Cathedral were among the landmarks lit a vivid ‘NHS blue’ during the emotional salute.

The Clap For Carers campaign, which started online, has been staged because ‘during these unprecedented times they need to know we are grateful’, the organisers said.

It follows similar moves in Italy and Spain – which have the world’s highest death tolls – which created astonishing scenes earlier this month as they applauded from terraces in the countries’ cities.

Ana de Armas Net Worth and How She Became Famous

Meghan Markle: The Entire Royal Family Was Out to Get Me!

J.K. Rowling’s New Book ‘The Ickabog’ Will Be Released Online For Free

Harry Potter is a brand known worldwide, and one of the most successful children’s franchises in history. The last four novels in the series set consecutive records as the fastest-selling books in history. When Harry Potter & The Cursed Child arrived in…

Nick Cordero Is 'Still Very Sick' as Doctors Place Him in a 'Proning Position,' Says Wife