The Australian actors have been married for 24 years and have two children—and Hugh Jackman is ever grateful that, at least one time in his life, he was 100 percent sure about something. 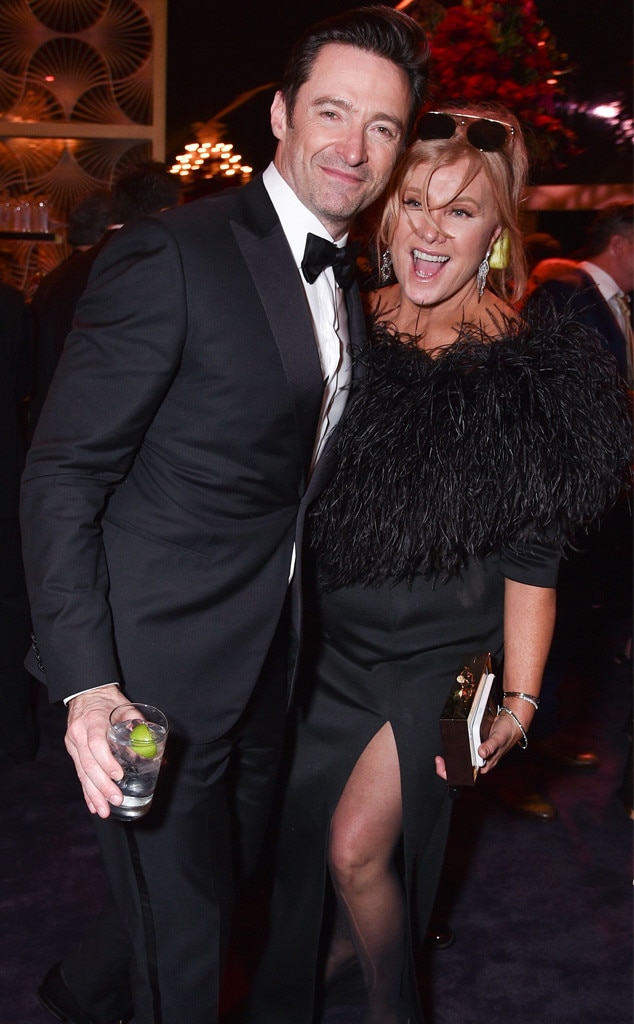 Deborra-Lee Furness can't help that Hugh Jackman was smitten with her at first sight. Go find your own hunky, multi-talented Academy Award nominee!

"We just had this amazing connection," Furness said recently on Anh's Brush With Fame about her husband of 24 years. "And I feel blessed that I experienced that I feel like I met my soulmate, whatever that is."

Jackman has made sure that he continues to define "soulmate" for his partner, amiably subscribing to the "happy wife, happy life" motto that's so popular to repeat but proves rather difficult for a lot of movie stars to implement.

But he doesn't mind putting in the work, considering that's how they got together—and stayed together—in the first place.

They met in 1995 on the set of the Australian TV series Correlli, a 10-episode drama in which Jackman played a prisoner who suffered a trauma during his transport to jail, and Furness was the prison psychologist trying to help him recover his memory.

"My first job out of drama school—it was a massive break for me. I was really scared," Jackman told Jess Cagle on People TV in 2017. "Deb, she was a big star. I get picked up, and Deb is in the front seat of the car. I'll never forget. She took off her seatbelt and she turned around and put out her hand and took off her sunglasses and said, 'Hi, I'm Deborra-Lee Furness, nice to meet you.'

Jackman has gushed about how everyone on set had a crush on Deb, but he was the lucky bloke who got to take her out.

"I knew very early. I knew before Deb knew, even when she tried to break up with me, I knew," the Bad Education star shared in 2018 on the podcast Aussies in Hollywood, hosted by Jenny Cooney, a personal friend of the couple. "I managed to talk her out of it, thank God. I'm a very indecisive person, you know this about me, Deb really knows this about me. I can count on one hand the amount of times in my life anything has felt that clear to me."

But with her, "I just knew 100 percent…I even knew when she was trying to work out reasons to break up with me…That is grace, as far as I'm concerned."

The True Love Story of Hugh Jackman and Deborra-Lee Furness

It's highly unclear what those could have possibly been, or whether she set down to make a list and literally laughed at how silly she was being, but okay.

Furness, who's 13 years old than her husband, explained that, at the time, she simply wasn't looking to get involved with anyone—especially an actor. (She had actually been living in Los Angeles for some time when, after a visit with a fortune teller who predicted "everything comes into place" if she returned to Australia, she decided to go back home. "What have I got to lose?" she remembered thinking.)

"I had just made my New Year's resolution," the Sydney native also recalled to Cooney on Aussies in Hollywood. "I said, 'I am not dating any actors, and definitely not under 30.' Meet my husband." (Jackman, who's celebrating his 52nd birthday today, told Cagle, however, that he's "literally the adult in the relationship. She's just like a little kid. I'm the [one saying], 'Babe, this is not a legal parking spot.' 'Oh, come on, Mr. Goody- Goody.'")

She also broke her rule about not dating co-stars, at least during filming, but she had this persistent 26-year-old falling in love with her and they did have an "instant connection"…

Jackman said that he was having the "best experience" working with Furness even before they started dating.

"This was before we were romantically involved or had any idea that Deborra was interested," he told Cooney. "There was a chemistry. And every time we had a scene together, it was unbelievable… Professionally, I've never had anything quite like that again." Furness assured that the feeling was mutual. Though at first her thought was, "'Who is this guy? Jack Hughman? I've never heard of him.' And then when we get on the set it was like, you know, you're playing tennis."

Back and forth, easy, etc.

He tried to ignore his feelings at first, and even spent a week avoiding any off-camera conversation, but that wasn't sustainable.

"Deb and I were already best friends, and I realized, I've got a crush on my leading lady," he told Cagle. "This is the thing you do not do. It's unprofessional and embarrassing."

But then he came up with a pretty slick move: group dinner at his place.

Furness was the first to ask what his deal was, why he hadn't talked to her for a week.

Furness was 40 when they got married and they started trying for a family right away, but there were some years of frustration ahead before they had kids.

"We struggled, a couple miscarriages, IVF—it's not easy, particularly on Deb," Jackman recalled to Cagle.

So, they opted for adoption, bringing home son Oscar in 2000 and daughter Ava in 2005. Both kids are biracial—a quality Jackman and Furness purposely sought out when they started the process.

"Oscar is a bit of everything—African-American, Caucasian, Hawaiian and Cherokee," he told New Idea in 2007. "We specifically requested a bi-racial child because there was more of a need. People will wait 18 months to adopt a little blonde girl; meanwhile, bi-racial children are turned away. The same was true for Ava, she's half Mexican, half German."

Absolutely true, but it's funny how questions about one's sexual orientation continue to titillate in some circles.

"It's, to me, not the most interesting thing about a person, anyway," Jackman said on Australia's 60 Minutes in 2013, addressing the strangely persistent rumor that he's gay. "I do get frustrated for Deb, cause I see Deb go, 'Ah, this is just crazy!'"

Furness added, "If he was gay, fine, he would say he's gay. It's annoying because it's not true."

Yet even in 2020, the combination of being handsome and nice and knowing how to sing and dance still apparently throws some people for a loop.

"He's been gay so many years," Furness said with a laugh on the Sept. 29 episode of Anh's Brush With Fame. "I was gay, too. You know when I did Shame? I was gay. They were shocked when I got married." (In the 1988 film, she played a lawyer who, while on a motorcycle trip through the Australian outback, meets a teenage rape victim and encourages her to press charges against her attacker, leading to major issue's with the perpetrator's wealthy, connected family.)

Ultimately, the most annoying part about the rumor is that it's untrue. "It's just wrong," the actress said. "It's like someone saying to Elton John, 'He's straight.' I'm sure he'd be pissed."

Chalk it up to a system that, when it can't find anything to harp on, will make something up in the meantime. Besides, no silly rumor has been able to pierce the armor that is their love for each other.

And while life has been pretty damn sweet, they've had their tough times, such as their fertility struggles early on and Jackman's handful of experiences with skin cancer, which have made him an enthusiastic advocate of sunscreen and getting regular checkups. (She also initially advised him to turn down the role of Wolverine in X-Men, but she's since forgiven herself for being wrong that one time.)

"When you find a partner in crime that you share, and you grow together—and life is tough as we know it, it's not all good—and when you have someone there that is so supportive…you can really stand buck naked. You have to," Furness explained. "When you've got kids and life and whatever, you stand there buck naked, authentic, warts and all, this is who it is, and you're loved, there's nothing better."

Jackman too has appreciated traveling through life with a true partner by his side, someone to share all the highs and lows with.

In fact, he told Ellen DeGeneres in 2016, with his 20th wedding anniversary coming up, that he was grateful that he met Furness when he was just starting out, before he was famous.

"Because," he said, "everything that's happened in my career and on-screen, off-screen, we've always done it together."

Look at these bright-eyed soul mates in 1997, about a year after they tied the knot.

The Sydney-born actors first met in 1995 on the set of the Australian TV series Correlli.

After a few drinks one night, Hugh admitted to his sexy blond co-star that he was crushing on her—as was the rest of the crew.

To his pleasant surprise, Deborra returned the sentiment. Somehow, we are not surprised.

Can someone say "body language"?

Not long after their 10th wedding anniversary, the Australian stars were still hot for each other.

Among the rules they live by: Never spend more than two weeks apart.

Hugh says his slogan has always been "Happy wife, happy life." So that's one of their secrets…

The Wolverine star gushes about his wife every chance he gets.

The classy couple are dressed to the nines at the 2014 Met Gala.

Hugh's in shaved-head Blackbeard mode on this particular trip to their son's school in New York.

Deborra is Hugh's date at the Eddie the Eagle premiere in Sydney.

Millions of mail-in ballots not yet returned in key states